America Is on the Verge of a Power Grid Crisis 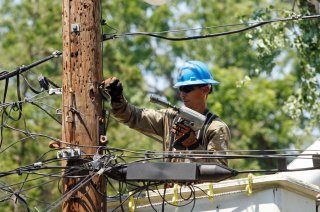 Over Christmas, four power substations in Pierce County, Washington were attacked, leaving 14,000 without power. Earlier in the month, on December 5, an unknown assailant opened fire at two power substations in North Carolina, leaving 40,000 people without electricity for several days. According to the local sheriff, the saboteur(s) “knew exactly what they were doing.”

These incidents, unnerving as they may be, are not isolated cases. Electrical grids in Oregon and Washington have been attacked six times since mid-November. All of these incidents share an uncanny similarity to the one in North Carolina. Furthermore, a notably well-coordinated attack on a San Jose, California substation in 2013 left seventeen out of twenty-one transformers there destroyed, causing $15 million worth of damage and coming “close to taking Silicon Valley off the grid.” As of the time of writing, none of the perpetrators behind these incidents have been brought to justice: the perpetrators simply had to shoot high-caliber rifles from a distance at the substation, leaving very little evidence behind that could be used to track them down.

Simply put, a transformer is a device that changes the voltage between two circuits. In the case of the HV transformers, they take the massive voltages generated by power plants and convert them into something usable by homes and businesses. Though these HV transformers make up less than 3 percent of transformers in the United States, they carry 60–70 percent of the nation’s electricity. According to a study by the Congressional Research Service (CRS), thirty such HV transformers are critical to basic national functioning. If only nine of these thirty transformers were to be disabled during a time of peak electricity demand, the result could be a coast-to-coast blackout. In other words, a particularly well-coordinated group of individuals could effectively disable the entire United States’ power grid within a matter of hours if they simply located and sabotaged these critical transformers. Even outside a “worst case” scenario, the destruction of more than three transmission substations would cause long-term blackouts in many areas of the country. Given that many of these substations are located in the same geographical region, it is entirely possible that a natural disaster, rather than human sabotage, could effectively knock out a regional grid.

What is most concerning, however, is that the United States lacks the capacity to quickly replace HV transformers. Due to the complex nature of these devices, most HV transformers are bespoke, requiring “three to four months” for engineering design alone. In practice, this translates to an average lead time between order and delivery of one to two years, not including installation times. Notably, this number comes from a 2010 study supposing ideal conditions—it certainly does not account for COVID-induced component shortages, or for emergency conditions where multiple transformers have gone offline.

Worst of all, the United States has almost no HV transformers manufacturing capability. There are only five facilities that state they can produce HV transformers, but it is unclear how many of these units they have actually produced. As a result, 85 percent of U.S.-bought HV transformers are imported from South Korea and Germany, which are the only countries that produce them for export. As of 2008, the delivery time on these units is nearly three years, according to a report by the EMP Commission. Considering Germany’s current energy crisis and its effect on domestic industrial capacity, plus various supply chain issues caused by the COVID pandemic, three years may be rosily optimistic. Compounding the direness of the situation is the fact that there is no spare stockpile of HV transformers, due to their high costs and lack of interchangeability.

This is certainly not impossible. After all, the United States has the capability to build HV transformers. According to the study from the CRS, “from 1950 to 1970, utility construction of large generation plants and associated transmission networks fueled a robust U.S. manufacturing market for large transformers. During this period, the United States (and Canada) accounted for approximately 40% of global demand for such units.”

Moreover, in 2008, the Department of Homeland Security successfully engineered a new type of transformer called RecX (short for “Recovery Transformer”), which could “enable recovery from transformer failure within days.” RecX was also lighter, adaptable to several different grid specifications, and easier to transport and install than conventional transformers. In fact, it was specifically designed to replace the most common HV transformers used in the U.S. power grid at a lower competitive cost ($7.5 million, compared to the industry standard of around $10 million). Yet despite meeting or exceeding their service requirements, only three prototype RecX units were installed in a power substation in Texas—funding for the program was cut after successfully demonstrating the concept.

Though the Federal Energy Regulatory Commission has ordered a review of power grid security standards, it is imperative that the U.S. government step up and address the HV transformation situation. The Biden administration should issue an executive order defining HV transformers, especially RecX units, as being “essential to natural defense,” the standard required by the Defense Production Act (DPA). From there, the president should invoke the DPA to compel manufacturers to produce RecX units and simultaneously pass an executive order creating a national HV transformer stockpile in case of national emergencies. Finally, Congress should pass a law that both mandates and funds adequate protection measures for vulnerable links in America’s energy grid, especially substations Though some critics may balk at these measures, they ultimately amount to a rather affordable insurance policy, especially when compared to the over $2 trillion already being spent on national defense. Given the evident risk to the nation’s power grid—if not the country’s very modern survival—it is better to be safe than sorry.