Is America Vulnerable to a North Korean Missile Attack? 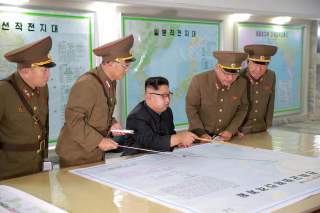 Yet, as the U.S.-South Korean Ulchi-Freedom Guardian joint military exercises got underway Monday, Kim Jong-un’s threats to attack Guam is a clear sign that the storm is not over, and nothing has been resolved.

A key question that remains on the table is—how can the United States shoot Pyongyang’s missiles down? Since China and Russia are quite happy to tie Washington in knots over North Korean threats, and since Trump will be loathe to capitulate to Kim, a diplomatic solution is unlikely any time soon.

Over the months and years to come, the U.S. military will need every arrow in its quiver—including missile shields—to protect Guam, Hawaii, Alaska and eventually the continental United States from the North Korean missile arsenal.

And that arsenal is growing: since 2014, North Korea has tested an ever-increasing number of missiles, with a couple of dozen launches in 2016, and possibly more to come this year. These missiles include the medium range, liquid-fuel Hwansong-12 and Musudan, which are capable of striking Guam. Also included in Pyongyang’s missile collection are the Pukguksong-2 and Hwasong-14, which are capable of reaching Guam and Alaska. Lastly, Pyongyang’s liquid-fuel intercontinental Taepodong-2 can reach Hawaii, all of the U.S. West Coast, and the lower continental states up to the Appalachians.

The United States can and should apply international sanctions and diplomatic pressure on the totalitarian hereditary dictatorship in Pyongyang. With that, the Pentagon has two main means to prevent and fight a North Korean missile attack. First, the United States will deter Kim with its massive nuclear triad: land-based ICBMs, submarine-launched SLBMs, and the U.S. Air Force’s B-1 and B-2 bombers.

Second, if deterrence fails, the United States should be able to shoot down any and all incoming North Korean nuclear warheads, preventing them from hitting American targets, civilian or military.

Hawaii, home to Pearl Harbor and eleven military bases, may become a major target for North Koreans. Currently, it is defended by the Missile Defense Agency (MDA) Ground Based Interceptors. A costly system—each Ground Based Midcourse Defense (GMD) ICBM interceptor missile costs $100 million—is dispersed as wide as Alaska and California, increasing the flight time of the anti-missiles.

With three to four interceptors needed against each incoming warhead, and a total of thirty-six interceptors deployed, GMD is not ready for prime time. Carefully staged tests have demonstrated its low effectiveness. Moreover, it relies on the Homeland Discrimination Radar Hawaii system that is untested and may require ten years to bring up to speed—time the MDA no longer has. The past performance of the MDA raises questions, as the satellite constellation, known as the Precision Tracking System, was never fully developed or deployed, yet cost the taxpayer $230 million. A missile space-based sensor program was a failure, at an even more staggering cost: $1 billion.

The defense of Guam, Hawaii and the homeland, however, needs to happen stat, which means it should be accomplished—for now—with available (and less costly) missile defense technology.

For example, the Navy could deploy some of its Aegis cruisers, with SM-3 missiles on board, in the waters around Guam and Hawaii. Additionally, Aegis Ashore is a tested system equipped with SM-3 interceptor missiles based on the navy cruisers. They can shoot down enemy missiles in mid-course or in the terminal phase of the missile flight. This system is deployed in Romania, and is being deployed in Poland, becoming operational next year. To coordinate defenses, the Pentagon could convert the Barking Sands Missile Testing Grounds in Kauai, Hawaii, into a missile-defense base for $41 million and deploy radars and batteries to the site.

The relatively cheaper THAAD system, with thirty-nine interceptors and an Army Navy/Transportable Radar Surveillance, is currently deployed in South Korea, and can be deployed in Guam and Hawaii to intercept enemy missiles in their terminal phase. THAAD can be assisted by the Patriot-3 system, which is also capable of shooting missiles down.

In the future, sea-, air- and space-based lasers, and other advanced technologies, will be needed to stop enemy missile attacks, but for now, the quick and simple solutions win the day.

A multi-tier defense—including Aegis cruisers and Aegis Ashore, THAAD, and Patriot Advanced Capability-3 interceptor—are needed today for Hawaii, Alaska, California and beyond. The cost-effective missile defenses need to be ordered by the White House, budgeted and appropriated by Congress, and procured and deployed by the U.S. military. Even that may take too much time.

As President Teddy Roosevelt once said, “Speak softly, and carry a big stick.” North Korea must know that even if it tries, its ballistic missiles will be shot down—and then its leaders will regret that they ever thought to mess with America. To do that, the United States needs to deploy its missile defense in Hawaii and beyond now. It should not wait until it is too late.

Ariel Cohen, Ph.D., is a nonresident senior fellow at the Atlantic Council and director of the Center for Energy, Natural Resources and Geopolitics at the Institute for the Analysis of Global Security.