America Will Decide If There Is War in Asia 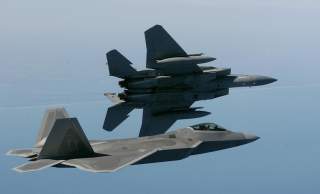 Aggressors, like China, start wars. Yet whether history’s next great conflict begins in East Asia will not be determined in the councils of a belligerent Beijing. If you’re trying to set your watch to the sound of gunfire, you must, most of all, observe Washington.

The region is in seemingly never-ending crisis because Chinese leaders believe their country should be bigger than it is today. As a result, China is pushing on boundaries to the south and east, using forceful tactics to both take territory under the control of others and close off international water and airspace.

The dynamic of aggression has started, and at this point China will not stop until it is stopped.

Unfortunately, Washington is in many ways responsible, or at least paved the way, for the latest round of Chinese provocation. That round began in the spring of 2012. Then, Chinese and Philippine vessels sailed in close proximity around Scarborough Shoal, in the northern portion of the South China Sea.

To avoid conflict in that critical body of water, Washington brokered an agreement between Beijing and Manila. Both agreed to withdraw their craft, but only the Philippines honored the deal. That left China in control of the shoal.

Beijing’s grab was particularly audacious. Scarborough lies just 124 nautical miles from the main Philippine island of Luzon, guarding the strategic Manila and Subic Bays. It was long thought to be part of the Philippines.

The Obama administration did not enforce the agreement it had brokered, perhaps under the belief it could thereby avoid a confrontation with Beijing. The White House’s inaction just made the problem bigger, however. Emboldened Chinese officials and flag officers then ramped up pressure on another Philippine feature—Second Thomas Shoal, where Chinese vessels have regularly operated—and the Senkakus, eight specks under Japanese administration in the East China Sea.

You would have thought that Washington policymakers had learned the costly lessons of earlier eras when Western timidity opened the door to large-scale conflicts that could have been avoided. Britain and France, for instance, allowed the Third Reich to remilitarize the Rhineland in March 1936. That gambit secured one of Germany’s frontiers and eventually led to Hitler’s annexation of Austria in March 1938 and his bold grab of the Sudetenland the following September. Germany, after the infamous Munich pact, took the rest of Czechoslovakia by the spring of the following year.

In the first half of August 1939 Hitler did not think Britain or France would go to war over Poland, and it’s not hard to see why. After all, they did nothing to stop him when they could have, in the Rhineland. Then they meekly stood by while he marched into large parts of Europe.

By the latter part of that August the declarations of London and Paris that they would defend Polish borders sounded hollow and in any event were too late. German forces crossed the Polish border on September 1, and London and Paris, likely to Hitler’s surprise, declared war on Germany two days later.

Unfortunately, America looks like it is following in the footsteps of Britain and France. The People’s Republic of China is not the Third Reich, but the dynamic in the second half of the 1930s and our era looks eerily similar.

Then and now, an aggressive power seized what it wanted. Chinese leaders today, like Germany’s before, believe further advances will not meet effective resistance. Moreover, there is at this time, like there was in that decade, a momentum toward war. Hostile elements—many but not all of them in uniform—are in control of the levels of power in Beijing, as they were in Berlin.

This month has seen those elements hit out toward their country’s south and east. To the continental south, in the Himalayas, Chinese troops intruded into Indian-controlled territory at four separate spots in the state of Arunachal Pradesh on the ninth.

To the maritime southeast, a Chinese vessel deliberately rammed a Vietnamese fishing boat on June 16. And last week about a dozen of China’s trawlers fished in Indonesia’s Exclusive Economic Zone and confronted local patrol vessels, creating the third such incident in as many months.

Moreover, to China’s east there was a series of incidents in the East China Sea. On June 15, a Chinese intelligence ship entered Japan’s territorial waters in the dark of early morning, loitering close to two islands off the main Japanese island of Kyushu. The intrusion was the first since 2004, when a submerged Chinese submarine transited a strait between two of Japan’s islands, and only the second by China since the end of the Second World War.

The incursion followed an incident on June 9 when, for the first time ever, a Chinese warship, a frigate, entered the contiguous zone off the Senkakus. This, in turn, followed the June 7 intercept of a U.S. Air Force RC-135 reconnaissance plane over the East China Sea by two Chinese jets. U.S. Pacific Command called the Chinese action “unsafe.”

And this brings us back to Scarborough, which could be as important a turning point to our era as Sudetenland was to last century. “We see some surface ship activity and those sorts of things, survey type of activity, going on,” said Chief of Naval Operations Admiral John Richardson to Reuters in the middle of March. As a result, the shoal could end up “a next possible area of reclamation.” Reclamation would make permanent China’s seizure and therefore constitute a game-changer if not immediately reversed.

So far, the United States has sent warnings. On April 21, four ground-attack A-10s flew what the U.S. Air Force termed “an air and maritime domain awareness mission in the vicinity of Scarborough Shoal.” Then this month in Singapore at the Shangri-La Dialogue Secretary of Defense Ashton Carter, in response to a question about Beijing’s possible reclamation of the shoal, spoke of “actions being taken both by the United States and by actions taken by others in the region which will have the effect of not only increasing tensions but also isolating China.”

What “actions”? In late March, the New York Times reported that General Joseph Dunford was overhead at the Pentagon asking Admiral Harry Harris, the chief of U.S. Pacific Command, the ultimate question. “Would you go to war over Scarborough Shoals?” the chairman of the Joint Chiefs of Staff wanted to know.

So far, very few Americans think Scarborough is worth a fight with the Chinese, and the White House seems reluctant to start a war anywhere. Therefore, the risk of conflict over those rocks appears to be extremely low.

Yet, despite appearances, the situation could be dangerous. For one thing, the Chinese seem determined to do something provocative when the Permanent Court of Arbitration in The Hague hands down its ruling in Republic of Philippines v. People’s Republic of China. Beijing has refused to participate in the case that will apply the rules of the U.N. Convention on the Law of the Sea to South China Sea issues, and most observers expect a decision favoring Manila in the next month or so.

Chinese leaders could simply decide to show the Philippines who’s boss by ignoring the decision, defying U.S. warnings, and building an artificial island over the contested Scarborough. Beijing might think it can get away with such an act, but authoritarian leaders do not have a good track record in reading American intentions.

Kim Il Sung was sure Washington would not come to the aid of beleaguered South Korea in June 1950. And at the time it looked like he had correctly read the Truman administration. Secretary of State Dean Acheson, in his January 1950 speech at the National Press Club in Washington, left South Korea outside America’s announced “defensive perimeter.” His language, whatever he intended, appears to have convinced Mao Zedong and Josef Stalin, Kim’s backers, that the North Korean was correct in his assessment that the United States would not fight. In June, Kim attacked in full force, and, despite everything, an unprepared, outgunned America went to war.

Saddam Hussein made a similar error. In July 1990, April Glaspie, the American ambassador to Iraq, indicated to him that Washington had little interest in “Arab-Arab conflicts,” words he interpreted to mean the U.S. would not stop him from taking over neighboring Kuwait. The Bush administration could have prevented a generation of tragedy by making a firm declaration of resolve during that pivotal conversation. Instead, Saddam invaded and America had to create a multi-nation coalition and lead a full-scale invasion to free the oil-rich emirate.

Today, it would be hard for China to predict what would happen if it started to reclaim Scarborough, in large part because it is not clear that Washington policymakers themselves know what they would do.

America is now showing resolve in the South China Sea, but it’s unlikely that, after the feeble response in the first half of 2012, U.S. officials have impressed their Chinese counterparts with the depth of their concern. That makes the situation at this moment extraordinarily dangerous.