America Would Never Be the First to Use Nukes. So Why Say We Might? 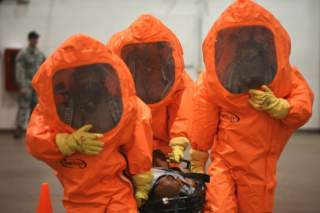 President Barack Obama is reportedly considering changing U.S. policy to say that the United States would never be the first nation to use nuclear weapons. Good idea. The United States has nothing to lose from this new policy, and everything to gain.

No sane U.S. leader would ever—ever—initiate the first use of nuclear weapons. So why keep the option open?

Most Americans will be surprised to learn that current U.S. policy allows the first use of nuclear weapons and horrified that we would even consider it. Given our vast advantage in conventional weapons and the devastating consequences of nuclear war for both the United States and its allies, using nuclear weapons first would be a military and diplomatic blunder of historic proportions.

Against a state with nukes, like Russia, U.S. first-use would be suicidal; the attacked state would hit us back with atomic devastation. Imagine Washington looking like Hiroshima in 1945, only worse. Nukes are truly weapons of last resort, useful only to deter their use by others.

And nuking a state that does not have them, such as Syria or Iran, would cast Washington as a global pariah, an international bully, undermining U.S. leadership on all issues—including terrorism and nonproliferation—for decades to come. It is unthinkable, and utterly unnecessary. Any threat from a nonnuclear state—including chemical and biological weapons—could be countered with diplomacy or conventional force.

Nukes are just different, and rightly so. No other weapons can kill so many, so fast. They need to be put in a class all by themselves. Even Donald Trump said recently that, if elected, “I will do everything within my power never to be in a position where we have to use nuclear [weapons] because that’s a whole different ballgame.” In March, Trump said, “I'd be the last one to use the nuclear weapon.”

Keeping the option open, just in case, is no longer worth the risk. The possibility of U.S. first use “exacerbates mutual fears of surprise attack, putting pressure on other nuclear-armed states to keep their arsenals on high-alert and increasing the risk of unintended nuclear war,” ten U.S. senators wrote to President Obama recently, including former presidential candidate Bernie Sanders (D-Vermont) and Elizabeth Warren (D-Mass.), who is close to the Clinton campaign.

If Obama takes this wise step, it could reassure Russia that the United States is not secretly planning to attack Moscow without warning. This might allow Russia to ease its finger off the nuclear trigger and reduce the chance of an accidental nuclear war. Given the dilapidated state of its warning system and very short decision times, the possibility of a Russian launch based on a false alarm is a serious risk to U.S. security. During the Cold War, the U.S. had at least three false alarms that could have led to an accidental nuclear war.

At the same time, U.S. allies should not worry that a no-first-use pledge would undermine Washington’s commitment to come to their defense. Even for states under the U.S. nuclear “umbrella,” such as Japan or South Korea, the U.S. first use of nuclear weapons is not needed to keep them safe, and in fact any use of nukes would undermine their security.

A no-first-use declaration will enhance U.S. security to the extent that other states believe what Washington says. But they might not. President Obama could make a no-first-use pledge more credible by backing it up with additional policy and operational changes.

Nukes Off Alert. The United States keeps much of its nuclear arsenal on high alert, ready to launch on warning of a highly unlikely, “bolt from the blue” Russian attack. Not only is high alert at odds with no first use (if we are not planning to use them right away, why are they ready to use right away?), but it puts insane time pressure on the president to make a launch decision within minutes. By taking U.S. weapons off alert and declaring that he would not launch on warning, President Obama would reinforce no first use and have much more time to make such a monumental decision.

No New Cruise Missile. Under no first use, there would be no need for nuclear weapons that are geared to first use in a crisis, such as the proposed air-launched cruise missile. Pentagon officials have said this weapon might be used for roles “beyond deterrence” early in a conflict. This new missile is destabilizing and unnecessary.

Phase-out Land-based Missiles. Once the United States declares a policy of no first use and takes weapons off alert, land-based, nuclear-armed missiles will have no useful role. They are relics of the past that should be phased out. These are also the weapons the United States would be likely to use first in a nuclear war. Better not to have them.

The time has come for the United States to declare it will never be the first to use nuclear weapons. No rational president would ever exercise this option. And just keeping the option open is no longer worth the risks. With a firm declaration of intent, we stand to gain a safer world, if the United States can convince Russia and other states that we really mean it.