American Credibility in the Age of Trump 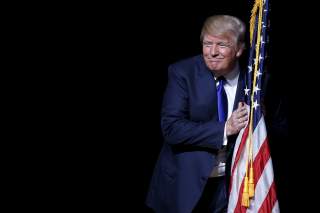 What best defines the “credibility” of the United States as a global power? In terms of American foreign policy and national security, who determines whether our nation is a “credible” ally or adversary?

The recent resignation letter from Secretary of Defense James Mattis suggests that these questions still matter to sober-minded policymakers. In using terms like “resolute and unambiguous,” “clear-eyed,” and “solidarity,” Mattis arguably was offering a primer on the importance of credibility in U.S. foreign relations.

To maintain the nation’s place as a global power, the argument goes, American credibility matters. Our alliances are based on it. Our enemies make calculations with not only our intentions, but our authenticity in mind. When President Barack Obama, for instance, decided not to intervene in Syria after Bashar Assad crossed an American “red line” by using chemical weapons, former Defense Secretary Leon Panetta asserted that Obama’s failure to act was “damaging” because “the credibility of the United States [was] on the line.”

But how much should credibility alone determine our nation’s foreign policy and grand strategy?

Without question, any nation’s foreign policy has multiple aims—determining threats to national security, articulating a vision of the future, to both friends and enemies alike, and promoting American prosperity to name just a few. And, as the recent National Security Strategy states, adversaries like Russia use “subversive measures to weaken the credibility of America’s commitment” to allies like those in Europe.

This linking of security to credibility is hardly new. Throughout the American war in Vietnam, U.S. presidents assumed the nation’s prestige, and thus capacity to influence the rest of the globe, rested upon them acting purposefully in defending and expanding American interests. They were not alone.

In June 1965, as Washington policymakers debated escalation in South Vietnam, National Security Advisor McGeorge Bundy argued to President Lyndon Johnson that any American actions in Southeast Asia “should be judged in terms of its effect on the credibility of our commitments throughout the world.”

Four years later, little had changed. Bundy’s successor, Henry Kissinger, spoke often of potential “credibility gaps” when arguing for military force to cover President Richard Nixon’s withdrawal plans from Vietnam. After the war, Nixon was even more direct. “We did not wring our hands when it became necessary to use military force or the threat of force. Our record established our credibility,” the former president argued, and our enemies “respected it.”

For sure, both presidents conflated their personal prestige with matters of national honor. In the end, however, both Johnson and Nixon acknowledged that credibility on the world stage was an integral party of American grand strategy, if not U.S. foreign policy writ large. It would seem General Mattis thinks along similar lines. So, too, do various other commentators concerned about President Trump’s precipitate withdrawal from Syria.

Yet if Trump’s recent policy pronouncements suggest he may not fully be considering how his actions might portend long-term consequences for U.S. credibility, it is incumbent upon all of us to start asking hard questions about how much “credibility” should drive American foreign policy and grand strategy.

The Syrian parallels to the Vietnam debate already are present. Analysts have argued that the U.S. withdrawal from Syria is “an abandonment of America’s key allies,” a key refrain of American hawks who blamed Congress for not continuing its support to the failed Saigon regime. But few of these foreign-policy specialists, now and then, offered tangible evidence for how a U.S. withdrawal would irrevocably damage American credibility overseas.

Moreover, Americans, regardless of political party, should candidly question when a president’s individual prestige becomes so overtly intertwined with that of the nation. Far too often that happened during the war in Vietnam. It is hubris to fight wars or dismantle alliances simply to indulge a president’s personal whims. But so, too, is it misguided to sacrifice blood and treasure for the sole reason of an undefined sense of national credibility. Decisions on American grand strategy need to be more than just about the nation’s prestige.

We might ask, then, who most defines our nation’s credibility? Is it a mercurial president who reflexively lashes out at those he perceives have slighted him? Is it a Secretary of Defense who traveled extensively to shore up nervous allies in the wake of the president’s latest tweet tirades? And what role do we as American citizens play?

Our nation’s credibility should include a common sense of our basic values, a commitment to ideals that elevate rather than degrade the nation in the eyes of the world. It involves trust that is earned. It should be about being seen as dependable by our friends and predictably stalwart by our enemies. And alone, it should never serve as the president’s primary call for using military force simply for the goal of maintaining a vague sense of national honor or prestige.

If we, America’s citizens, are worried about the nation’s credibility abroad in these turbulent times, then we need to be more precise in how, collectively, we want define this term. And, just as importantly, we should more forcefully ask our policymakers to better articulate how our “credibility” is linked to our national-security interests.

Gregory A. Daddis is associate professor of history and director of the MA Program in War and Society Studies at Chapman University. He is author of Withdrawal: Reassessing America's Final Years in Vietnam.