American Diplomacy Towards North Korea Must Be Backed by Missile Defense 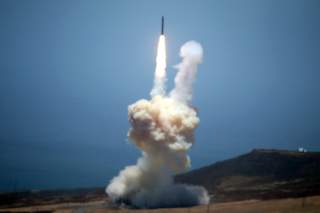 The planned United States–North Korea summit ended abruptly Thursday morning with President Trump’s official withdrawal from talks. In his announcement – which came in a formal letter to North Korean leader Kim Jong Un – Trump lamented the cancellation as “a detriment to the world,” but insisted that a continuation of talks would be “inappropriate” given the Kim regimes “tremendous anger and open hostility” in recent statements. The collapse of negotiations will reverberate far beyond Korea, holding significant implications for future engagement with American geopolitical foes like Iran. It also remains unclear if China played a role in this miscarriage of diplomacy.

Both sides began negotiations with high hopes that the June 12 summit would serve as a critical first-step in denuclearizing the Korean peninsula. But prospects for a successful meeting quickly regressed as the Trump administration’s evocation of the “Libya Model” for disarmament provoked aggressive rhetoric from the Kim regime. Among the harsh words from North Korea’s state media were threats of a “nuclear showdown,” and name-calling that labeled Vice President Pence “a political dummy” and National Security Advisor John Bolton “repugnant.”

So much for a Nobel-prize worthy summit.

With aspirations for a nuclear-free Korea once again set aside, U.S. policy makers must revisit the menace of North Korea’s missile program. In 2017, the Kim regime conducted a staggering number of missile launches – two per month – including longer-range tests, sea launches, and sending up satellites. Their Hwasong-12 ballistic missile has a reported range of 4,500 km, which puts U.S. assets in Guam and western Alaska at risk. Their Hwsaong-13, 14, and 15 variants (with ranges of 8,000 km, 10,000 km and 13,000 km respectively) are capable of striking every major city on the west coast and possibly those on the eastern seaboard. They are also miniaturizing a nuclear weapon to fit atop these long- range rockets. Added to this is the fact that North Korea, not a signatory of the Nuclear Non-Proliferation Treaty, holds the unsavory distinction of being the only state to conduct a nuclear test in the 21st century.

Today, the sole U.S. defense against a intercontinental ballistic missile (ICBM) attack is the Ground Based Midcourse Defense System (GMD). Regardless of the outcome of any future negotiations with North Korea, the Trump administration should commit to expanding and modernizing the capabilities of GMD, which includes 44 interceptors emplaced across Fort Greely, Alaska and Vandenberg Air Force Base in California.

The GMD program in its current state affords negligible protection against a dedicated ICBM threat from near-peers like Russia and China, but its effectiveness increases against smaller arsenals, such as those of North Korea, and eventually, Iran. Presently, a North Korean ICBM is the most probable intercept target of our missile shield, followed perhaps by an errant launch from Russia or China.

The pace and scale of Kim’s weapons program should greatly trouble Washington. Responding to this threat requires the entire foreign policy toolbox available to policy makers, the most effective being diplomacy. But as we have witnessed, diplomacy needs an insurance policy. The GMD is that insurance – after all, limited coverage is far preferable to none at all.

The problem is that the GMD’s track record greatly needs improvement and needs it now. For instance, GMD has only succeeded in intercepting 9 of 18 test targets over the years. Moreover, opponents claim that, these tests were “built to succeed.” In other words, those tests were designed in optimum conditions where launches were anticipated and typical ICBM countermeasures (such as decoys, and heat and radar masking materials) were limited.

To their credit, the Trump administration proposed an additional USD 2.1 billion for upgrading the GMD in their fiscal 2019 budget request. The funds would go towards the construction of a new missile field in Fort Greely, bringing the total number of interceptors to 64, and the redesign/testing of new, more effective “kill vehicles” (ie the kinetic warheads) which sit atop each long-range interceptor. To better increase our chances of thwarting an ICBM attack on U.S. soil, we must continue this sort of investment in the GMD system.

Like any good insurance policy, one hopes for reliable protection. While we hope to never use it, we had better be prepared. Si vis pacem, para bellum. (If you want peace, prepare for war). With this insurance policy, America can be better assured in its efforts to talk to, and defend against, North Korea.

Ariel Cohen, Ph.D., is a nonresident senior fellow at the Atlantic Council.