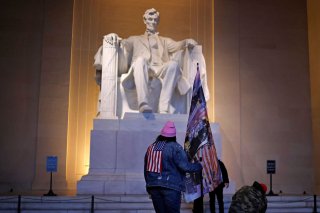 IN 1838, Abraham Lincoln observed that any truly existential danger to the United States of America would not come from military threats abroad. Pointing to America’s enviable geographic position, he asked, “Shall we expect some transatlantic military giant to step the ocean and crush us at a blow?” He answered himself with a resounding “Never!” Lincoln’s certainty was rooted in the enormous potential of antebellum America: “the armies of Europe, Asia, and Africa combined,” with all the world’s riches and “a Bonaparte for a commander,” could not in one thousand years “take a drink from the Ohio or make a track on the Blue Ridge.” The real danger came not from abroad but from within. The greatest threats were those, he said, that “spring up amongst us.”

Lincoln’s prescient remarks arrived in the context of the urgent question of slavery in the Republic, but they have echoed down to us with renewed force. When Lincoln spoke nearly two hundred years ago, America could not be considered a great military power. Still, in grasping the implications of America’s vast resources and enviable geographic position, Lincoln foresaw that America’s potential for a foreign military defeat on its own soil was nonexistent. The real potential for America’s undoing came from domestic sources: unchecked vigilantism, mobocracy, and widespread disrespect for American institutions and the rule of law. Unfortunately, Lincoln’s personal wisdom was forgotten not just by the Party of Lincoln, but across the American political establishment.

America’s focus on real and perceived threats overseas has led to an unconscious oversight of domestic, inherently American threats. This strategic distraction has favored addressing foreign threats and those domestically with a foreign aspect, leaving a wide space for domestic extremism to go unchecked. The fringe ideologies, disinformation, and sundry grievances simmering in our political climate were harnessed by Donald J. Trump and his allies, reaching its apotheosis in the Capitol insurrection on January 6, 2021. How did American conceptions of national security develop over the last century in which such domestic threats could flourish in a country that is otherwise obsessed with national defense?

DURING THE twentieth century, there were serious threats to American stability such as labor unrest, economic depression, and racist violence. But there were parallel internal threats to American national security, such as spies and saboteurs, who represented a fifth column force allied with an external enemy or ideology. None were cloaked in the flag or rooted in traditional conceptions of American patriotism. For instance, in 1916 German saboteurs set off munitions on Black Tom island to support the German effort during the First World War. While America was at peace, global ideologies such as anarchism posed internal threats, such as the assassination of President William McKinley in 1901 by the anarchist Leon Czolgosz, and the deadly 1920 Wall Street bombing, likely also at the hands of anarchists.

If the New Deal could secure economic security for most Americans, national security was a different matter. During the Second World War and the subsequent Cold War, America’s domestic security threats mostly stemmed from Soviet spies and their agents who damaged America by stealing the blueprints for atomic weapons and betraying America’s overseas intelligence and military operations. If anything, these domestic threats were akin to scouts of Lincoln’s foreign armies and were properly dealt with. By the end of the twentieth century, there were, however, harbingers of real anti-government dangers lurking within the domestic fabric of American civil society, but social media connecting and amplifying these disparate fringes—and politicians legitimating their untrammeled urges—was still a generation away.

After the Second World War, America found itself in a new and unfamiliar strategic context on the world stage, with perceived security responsibilities for the global commonweal. Having been an architect of the postwar international security order, and picking up the hegemonic reins from Great Britain along the way, America declared itself primus inter pares. During the Cold War, the antagonistic and nuclear-armed Soviet Union gave America a useful foil to direct its military energies. The internationally-focused U.S. government occasionally looked inward to consider security threats, but primarily those with a foreign nexus. For instance, during the McCarthy era, the fight against communism overseas was matched by the Red Scare at home. But after the end of the conflict, America retained its ring of bases in allied countries and found itself policing a far-flung empire in all but name. There was some significant slashing of the defense budget. In 1992, the Congressional Budget Office expected to cut military spending by 28 percent in five years. Although the accompanying cuts to the smaller intelligence budget were ill-advised, the peace dividend was short-lived. American national security was here too defined by the intent and capabilities of external actors—or lack thereof after the Soviet Union disintegrated. Resources rose and fell on America’s threat assessment of foreign actors.

While the Cold War was resolved without apocalyptic violence between the superpowers, domestic extremism without a foreign connection was on the rise. Several self-identified patriots—Americans without foreign allegiance—began to act violently at home. Most notably, 1995 saw the bombing of the Alfred P. Murrah federal building in Oklahoma City by Timothy McVeigh, a former U.S. soldier, and his coconspirators, which took the lives of 168 Americans, including children at daycare. McVeigh claimed he sought retribution against the federal government for its heavy-handed actions against the white supremacist anti-government resisters in Ruby Ridge, Idaho, led by Randy Weaver, another Army veteran, in 1992, and the federal government’s storming of the Waco, Texas, Branch Davidian cult compound the following year. These events were lumped in with other fringe movements led by unhinged people. Law enforcement and the judicial system handled such cases without further analysis of these omens auguring the deep-seated fraying of the American fabric from within. For the time being, these were lone actors, not mass movements. They had neither digital connective tissue nor a focal point to rally behind. That no one foresaw collective violence as the zenith of such localized individual action was less a failure of imagination than a symptom of America’s sustained focus on foreign-emanating threats. The terrorist attacks of 9/11 seemed to justify this perspective.

The 9/11 attacks caused American politicians and military leaders to chastise themselves for cutting military budgets after the fall of the USSR and, reversing course, prompted a rapid expansion of the empire further in search of national security—starting some ill-considered wars along the way. Much of the ability to monitor domestic extremism by law enforcement was instead pulled into the counterterrorism vortex that preoccupied so much of the American government’s attention for nearly two decades. No sooner than the terrorist threat subsided—or was at least put into appropriate rational perspective—that the new animating idea became “Great Power Competition” to justify continued military basing abroad to counter America’s perpetual nemesis: foreign threats. Russia is back, we are told, ready to resume the superpower standoff, and China’s rise must be checked or else America will be displaced as the global hegemon. Arguing that this future should be avoided at any price, this is why the American foreign policy “blob,” along with most politicians and military officials, have been pushing military assets ever closer to Russian and Chinese borders. America’s forever wars, perpetuated by the lavish appropriations euphemistically entitled “Overseas Contingency Operations,” implicitly argue, as the name implies, that security contingencies happen overseas. Even America’s cybersecurity strategy of “defend forward” mirrors the strategic logic that America is safer the farther away its military operatives can keep a toehold. Through it all, domestic threats were placed on the back burner, but were a tinderbox in search of a spark.

Meanwhile, this emphasis on protecting the castle from foreign invaders—even while going abroad to find dragons to slay—has let the erstwhile domestic fringe groups become ever more coordinated and mainstream under our noses. The FBI lacked the resources to monitor burgeoning domestic extremist groups, and America’s intelligence and law enforcement divide—including constitutional limitations and significant dilemmas surrounding legal authorities—meant that some of America’s most capable agencies were barred from assisting. The likes of white supremacists, the Boogaloo Boys, Proud Boys, Oath Keepers, Three Percenters, and QAnon movements on the alt-Right and Antifa on the far Left, fertilized by the manure of disinformation and connected by root networks of social media, have sprouted like mushrooms in the shade provided by America’s focus on shining its light on dark corners of the Middle East and beyond.

A critic may reasonably ask why America cannot simultaneously maintain both the Pax Americana abroad and at home. Aside from the obvious contradiction that the Pax Americana has seen much bloodshed, post-Cold War America is easily distracted in a strategic sense and has not displayed the bandwidth to grapple with foreign threats and also pay sufficient attention to domestic threats which don’t have a corresponding foreign ideology. Such threats are not merely “domestic” in the sense that they are physically located in America, but they are inherently American, and Lincoln was right to fear them. America’s vision of itself as both consistently in grave danger—justifying preventative wars—yet meanwhile also presenting itself as the indispensable nation for global stability has distorted its capacity for domestic reflection and internal self-care. In constitutional terms, the expansive understanding of providing for “the common defense” has overshadowed promoting the “general welfare” and insuring “domestic tranquility.”