An American History of Divided Loyalties 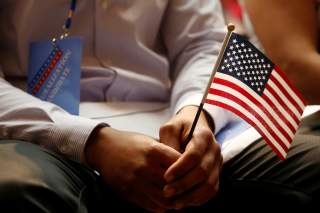 Suspicion of divided national loyalties is older than the republic. It is intrinsic to any pluralistic nation built on immigration from many countries. So American friends of Israel are not alone when viewed with wary eyes.

At the time of the revolution many colonials were Tories who joined the king’s service in an attempt to defeat the rebels. That fact has resonated in my own family since the day in 1776 when an ancestor, twenty-one-year-old Hugh Ivester, arrived from the Orkney Islands as an indentured servant. The holder of the indenture was a loyalist who, having been tarred and feathered by rebels, failed to meet the boat on which the contract workers arrived. That loyalist recovered to fight for King George, lost everything in the revolution, and returned to England after the war. It is not clear whether Ivester served his indenture and joined the Tory forces or whether at some point his loyalties turned rebellious. At any rate, the young man in a strange land who had never known anything except the king’s rule remained after the revolution. His daughter married a German-American named Fry; both rest in a country cemetery in Georgia.

Immigrants to America over the centuries came with undoubtedly mixed emotions, some with affection for their homeland, others eager to leave it behind, often perhaps with a touch of animosity. The millions who continued to read German publications and speak the language well into the twentieth century gave authorities in Berlin the false sense that they could manipulate American politics through that constituency. In 1916 a German foreign ministry official told U.S. Ambassador James Gerard that Americans would never enter the European war because there were 500,000 German reservists in the United States who would prevent it. The diplomat responded acidly, “If there are 500,000 German reservists in the United States there are 501,000 lamp posts” from which the disloyal would hang. The German government's attempt to play upon immigrant loyalties persisted into the 1940s, nourishing the ambitions of the German-American Bund.

The Pan-German movement of the nineteenth and twentieth centuries also posed the problem of dual loyalties in Europe. In Austria, local Nazis oriented toward the Third Reich were the subversive element that enabled Hitler to march troops into Vienna in 1938 and imprison the young chancellor, Kurt von Schuschnigg, as Hitler incorporated Austria into the greater German state. Divided loyalties fed the Sudeten Deutsch ferment in Czechoslovakia, the Quisling movements in Norway and elsewhere, undermining those nations and facilitating Nazi occupation.

In the United States, the most infamous episode saw suspicion—not evidence–turn thousands of Japanese Americans into internees forced to leave their homes and live in camps for the duration of World War II. Decades later, belated apologies and reparations testified that the shame was not theirs, but the American government's.

Italian-Americans, too, have been tainted by a widespread tendency to perceive them as entangled in and loyal to the mafia circles in the old country from which a few emerged. Films and television and books have reinforced that perception, anchoring a stereotype that breeds lingering prejudice.

Much the same phenomenon persisted prior to and throughout the Cold War when communist movements in many countries looked to Moscow as the center of their preferred political universe. Not only in the United States but notably in Italy and France local Communists were perceived as loyal to the Comintern directed from the Soviet Union. In the United States that issue was particularly acute. Many Americans attracted suspicion for their sympathies toward the Soviet experiment and the Communist ideals it allegedly pursued.

Communists and anarchists were often locked together in the public mind as the source of terrorism. That attitude stoked witch hunts and assaults on personal liberty at several points from the 1920s on, later provoking the loyalty oaths of the Truman administration. To be sure there were subversive elements that warranted attention and control. Yet the devious and self-serving tirades of Joseph McCarthy proved how easy it is in a democratic society for suspicion to become intolerance and criminalization.

The most problematic current case of hostility toward Americans with foreign ties arose as the world trade towers fell. Wariness of Arabs and more generally of Muslims, amplified by the specific horror of 9/11, is almost syllogistic: Muslims are terrorists, he/she is a Muslim, ergo he/she is a terrorist. Logic that flawed is pernicious to the tolerance essential to American community.

So, it is worth placing the recurrent kerfuffle over American Jews’ relationship to Israel in that broader context. Suspicion is bound to arise. But the emergence of multiple voices among American Jewry—not only AIPAC but J Street and others—is a wholesome antidote to the myth of unified, unquestioning loyalty to Israel. Even Israeli Jews harbor doubts about their government’s conduct—as any citizen in any country should. One hardly has to be Jewish (or evangelical Christian, for that matter) to hold deep affection for Israel and the other residents of the Holy Land. Given the extraordinary history of the Jewish diaspora and the creation of Israel, it would defy human emotion for feelings to be otherwise. That history teaches a universal moral imperative: it utterly condemns oppression of Jews by others—and oppression by Jews of others.

Specific incidents of disloyalty make it hard to strike a reasonable balance of attitudes on these complex sentiments. When an American, Jonathan Pollard, spied for Israel, many American Jews were alarmed—and angry—that his betrayal would fortify the suspicions under which friends of Israel labor. The case was not too different, though much graver, from the activity decades ago of writer George Sylvester Viereck, whose propaganda efforts to foster better relations between Germany and America finally led him to prison during the World War II.

However, just as it is neither fair nor accurate to suspect affection for Israel as proof of disloyalty to America, neither should criticism of Israel or AIPAC or American zionists be condemned as evidence of anti-Semitism. Particularly, caution is in order when the criticism arises from deep concern for injustice to other occupants of the biblical territory.

Supporters of Israel who are concerned about the suspicions they evoke might compare them with the intense feelings directed by many Israelis toward their Arab fellow citizens, especially those with Palestinian roots and sympathies. Those feelings reside in the context of genuine and immediate fears for Israel’s security, making them far more problematic for political accommodation.

The late Israeli author, Amos Oz, captured the reality of mixed emotions and multiple loyalties toward one’s native land. In paraphrase, he said, “I love Israel—but I don’t always like it.” Comparable sentiments run toward Palestinians in the West Bank and Gaza Strip. One's concern for them may be coupled with exasperation and despair over their leadership's repeated failures to forge the unity that could shape effective negotiations.

In fact, Americans may commonly feel the same way about our own country. The deepest patriotism can be accompanied by distress over our country’s defects and shortcomings. That is especially likely when a U.S. leader preys upon tribal divisions to gain or retain personal power.

The wisest counsel on this issue dates back more than a century. Carl Schurz, a German-American, Lincoln Republican, politician and journalist, refined an earlier nationalist mantra to proclaim: “My country, right or wrong. If right, to be kept right; if wrong, to be put right.” Unskeptical loyalties mark unthinking citizenship.

Alton Frye is the Presidential Senior Fellow Emeritus of the Council on Foreign Relations.