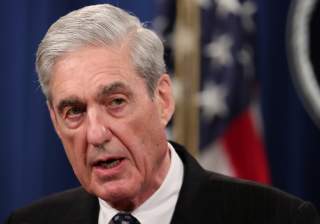 Special Counsel Robert Mueller’s understated yet highly anticipated press conference yielded more questions than answers, even if the former FBI director largely stuck to the text of his already published report. Naturally, he took no questions from reporters and he said he did not want to face any from Congress either.

“The report is my testimony,” Mueller said as he officially wrapped up his investigation into Russian interference in the 2016 presidential election. Unfortunately, that won’t cut it.

Mueller hasn’t given a satisfactory explanation for why he did not reach a definitive conclusion—a “traditional prosecutorial judgment”—about whether President Donald Trump committed obstruction of justice. In possibly the most significant discrepancy between his account of the Trump-Russia investigation and Attorney General William Barr’s summary, Mueller leaned heavily on the Justice Department guidelines forbidding the indictment of a sitting president.

Barr said that his, and ostensibly then-Deputy Attorney General Rod Rosenstein’s, exoneration of Trump did not turn exclusively on this constitutional interpretation—and left the unmistakable Impression that this was true of the special counsel’s more equivocal finding as well. Mueller left a rather different impression, but his public rationale for punting does not really hold water.

Mueller reasoned it “would be unfair to potentially accuse somebody of a crime when there can be no court resolution of the actual charge.” But he also laid out evidence against the president in exhaustive detail in a report he expected—indeed, wanted—to be substantially made public. He also pointedly reminded Congress of its ability to act on his handiwork in comments many Democrats read as a passive-aggressive impeachment referral. That takes things a step beyond former FBI Director James Comey’s widely panned handling of the Hillary Clinton email investigation.

The inability to indict Trump does not prevent Mueller from taking a firmer position on obstruction or making a more explicit impeachment referral, as Kenneth Starr did at the conclusion of his investigation of President Bill Clinton. The Washington Post attempts to square this circle by reporting “Mueller’s team came to believe that making any sort of impeachment referral to Congress also would fall under the category of accusing the president of a crime.”

Jonathan Chait praises this as King Solomon’s wisdom in New York Magazine. “So Mueller can’t explicitly say he would have charged Trump with a crime if he could have, and he also can’t explicitly tell Congress to impeach the president,” Chait writes. “Instead he’s heavily hinting at both points.”

Come on. This first of all defeats the purpose of a special counsel investigation. Secondly, what is the meaningful difference from a fairness perspective between leveling clear accusations, tested in court or otherwise, and “heavily hinting” at such accusations while dangling them in front of partisan House Democrats?

Americans have a right to know whether Mueller or his team genuinely viewed obstruction as a close call or whether other considerations were in play. Mueller, unlike Starr, reported to an attorney general who was appointed by the president he was investigating and who also disagreed with both his legal theories on obstruction and his reading of the evidence. That attorney general, not Congress, was going to be the initial recipient of the report. Did Mueller fear that a more direct accusation against Trump would not be made public intact?

Either way, Democrats chairing the relevant congressional committees and running for president in 2020 took the hint. So what does House Speaker Nancy Pelosi do? Mueller has intensified impeachment fever among her caucus without raising the likelihood of a Senate conviction or changing the mind of a single Republican this side of Justin Amash (R-MI). Pelosi lived through Clinton impeachment saga and tamped down pro-impeachment sentiment among antiwar Democrats under George W. Bush. This is going to be a lot harder.

Trump isn’t as popular as Bill Clinton. Pace 1990s nostalgics, impeachment is unlikely to make him as popular. But that doesn’t necessarily mean Democrats will be able to make impeachment more popular than it already is, especially with independents. Adam Schiff and Jerry Nadler are not going to be seen as honest brokers; Mueller barely was.

Democrats will point to Republican hypocrisy. They voted to impeach Clinton over obstruction and now won’t do the same to Trump. But Democrats helped acquit Clinton on the grounds that the underlying crimes—lying about adult consensual sex in the pre-MeToo era—weren’t serious enough. Mueller wasn’t able to prove Trump’s underlying crimes even existed. Every charge his team concluded they could walk into a courtroom and prove was either a financial crime that predated the campaign or a process crime arising from the investigation itself. Not a single American was ever indicted for conspiring with Russia to swing the presidential race or commit an election-related crime.

Finally, there’s the question of Trump. His smartest move would be to emulate the Clinton playbook. But does he have the discipline to do that? One early incident suggests no. He shut down infrastructure talks with Democratic leaders because Pelosi used the word “cover-up.” That’s the opposite of the message he needs to be sending. He needs to show Democrats failing to legislate because they are too busy holding hearings in an attempt to find something more damning than Mueller did, not indicate that he himself will refuse to govern if they don’t knock it off.

And this infrastructure dust-up was a premeditated political stunt with prepared signs and talking points. That’s a lot more messaging strategy than goes into the typical Trump tweet. If Trump melts down in response to an impeachment inquiry, it will change the political calculus for Democrats—and perhaps even Senate Republicans, who might start wondering whether Mike Pence is a sturdier horse to ride into 2020.