Americans are Academically Ill-Equipped to Defend the Constitution 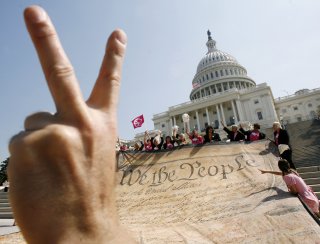 “A republic, if you can keep it,” Benjamin Franklin allegedly quipped when asked what type of government the Constitutional Convention had crafted for the United States. More than two centuries later, astonishingly low levels of civic literacy suggest Americans are academically ill-equipped to do so.

Just 23 percent of American eighth-graders are proficient in civics, according to the National Assessment of Educational Progress (NAEP). That figure falls to nine percent and 12 percent for African American and Hispanic students, respectively. Eighth graders fare even worse in U.S. history, with just 18 percent scoring proficient on the most recent administration of the test.

This civic illiteracy carries over into the adult years. The Annenberg Public Policy Center has found that just two in five Americans can name all three branches of government; one in five cannot name a single branch.

Former Pepperdine University President David Davenport was astonished to discover students pursuing a masters of public policy who had never read the Constitution.

Civics should be considered essential content in high schools. Instead, these basics have been cast aside for a politicized “action” civics which focuses on neighborhood organizing and engagement with special interest groups, rather than a civics education that leads to thoughtful and engaged citizenship.

One need look no further than the politicized efforts of the New York Times’ “1619 project,” which seeks to relocate America’s founding from 1776 to 1619 when the first slaves arrived from Africa. Its lesson plans suggest teachers question whether American was founded “not as a democracy but as a slavocracy.” In less than eight months, the program has been adopted in some 3,500 public schools across the country.

By failing to develop civic literacy and politicizing civics instruction, schools are falling down in their responsibility to equip students for civil society, particularly as it pertains to civic duty and character.

So what can be done to change course? Efforts to improve civic literacy should come from civil society. Unfortunately, a new report suggests Americans should look elsewhere—to the federal government.

Last month, the National Commission on Military, National, and Public Service released a report outlining an ambitious—and expensive—goal. Over the next eleven years, the commission hopes to expose all K–12 students to civic education so that all fourth, eighth, and twelfth-grade students will test at or above “Proficient” on the 2031 NAEP civics exam.

Those old enough to remember No Child Left Behind’s passage in 2001 will recognize that language. The widely derided NCLB mandated all students test proficient in reading and math by 2013–14 school year—yet another goal the federal government was unable to effect through dictate.

The cost of the commission’s proposed civics effort? It’s $200 million annually for eleven years. The assumption is that distributing federal dollars to state and local education agencies, institutions of higher learning, and non-profit organizations will correct the nation’s civics problem. Unfortunately, this hefty request for appropriations is both an inappropriate federal undertaking and unlikely to produce the desired results.

Although well-intentioned, spending hundreds of millions of dollars annually through a federally appointed commission is the wrong approach to bolstering civic knowledge. Washington should not—and indeed federal law says cannot—be involved in curriculum, so the report’s plan for the commission to fund “best practice curricula” is misguided. More fundamentally, it is not the job of government officials to spend taxpayer money at the federal level to advance a particular vision of content they like.

The report even calls for creating a new office within the Department of Education to oversee the new Civic Education Fund. But at this time of multi-trillion-dollar deficits, Congress (particularly conservatives) should be working to reduce the federal footprint in education, not expand it.

And perhaps it’s a basic civics lesson in and of itself to point out the education is simply not an enumerated power of the federal government. Those who have read their Constitutions know the word “education” is not to be found therein.

Alexis de Tocqueville, best known for his works Democracy in America and The Old Regime and the Revolution, observed America’s unique potential to solve problems and advance society through what he referred to as association. “When you allow [citizens] to associate freely in everything, they end up seeing in association the universal and, so to speak, unique means that men can use to attain the various ends that they propose,” Tocqueville wrote in Democracy in America “Each new need immediately awakens the idea of association. The art of association then becomes, as I said above, the mother science; everyone studies it and applies it, he observed.”

We should rely on this great strength: our ability to form associations called civil society.  Classroom learning is essential, but as a society, we cannot afford to depend on the government to remedy civic illiteracy. Civic learning takes place beyond the walls of the schoolhouse. It happens during Girl Scout and Boy Scout troop meetings, Rotary Club gatherings, youth and faith-based groups and summer camps.  And let us not forget that sacred place called home—where learning begins and a child’s first and foremost educators, his or her parents, reside.

Study after study suggests that the majority of Americans, from thought leaders to individual citizens, believe civic literacy is essential for a flourishing society and a strong Republic.  Federal dollars will not solve our deficiencies in civics. Yes, schools should return to the roots of civics, teaching American history, the structure and function of government, patriotic obligations, and political thought. But teachers and school systems are just some of the many partners— outposts of civil society as well as parents—with shared responsibility for giving the younger generation a solid grounding in civics. Doing so will not only help children learn to appreciate the blessings and liberties of a free society, it will help them preserve those blessings and liberties for the next generation.