Americans Are Strangely Oblivious to the Security Crisis in Mexico 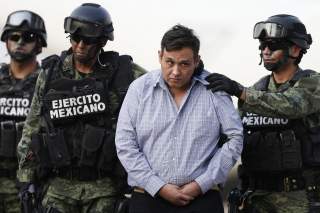 The capture of Joaquin “El Chapo” Guzman, leader of Mexico’s Sinaloa drug cartel, in 2016 and his extradition to the United States the following year, has caused that country’s already worrisome drug violence to become much worse. During the first six months of 2017, some 12,500 people have perished in the carnage—a rate of more than 2,000 victims per month. That level is especially significant, because it is nearly twice the pace of Mexico’s previous horrifying spasm of violence from 2006 to 2012 during the administration of President Felipe Calderon.

Guzman’s removal from the scene worsened the turmoil in two ways. First, it triggered leadership rivalries within the hugely profitable Sinaloa cartel. There is now a ferocious three-way struggle for control of that organization. That is hardly surprising, since criminal enterprises rarely have detailed (much less peaceful) succession plans for the departure of CEOs. The financial stakes also are exceptionally large. Under Guzman’s leadership, Sinaloa had gained control of a majority of the trafficking routes into the United States and nearly 50 percent of the total drug trade. It is, quite literally, a multi-billion-dollar enterprise that is now up for grabs.

In addition to Sinaloa’s bloody internal strife, longtime rivals, such as the Gulf cartel, the Juarez cartel, and Los Zetas, which Guzman had outmaneuvered and weakened, have reasserted themselves. They also have become more aggressive, both against competitors and government security forces. However, Sinaloa is not the only trafficking operation to be experiencing violent factionalism. Los Zetas are also engaged in an intense internal power struggle. As the fragmentation of the trade increases, so too does the fighting.

If all this were not enough, there are entirely new entrants into the fray. An especially worrisome one is Jalisco New Generation (JNG), a gang that emerged in the state of Jalisco a couple of years ago and is now branching out into neighboring states. JNG’s viciousness threatens to exceed that of the established cartels—even the notoriously brutal Zetas.

Mexico’s current agony continues a familiar pattern. Whenever governmental authorities eliminate a leading drug trafficker, or even an entire trafficking organization, the result is increased turmoil as rivals and potential successors maneuver to gain advantageous positions in the lucrative global commerce in illegal drugs. That pattern occurred several times previously in Mexico, and it has done so in other countries as well. When the United States and Colombia crushed the Medellin and Cali cartels in the 1990s, including killing Pablo Escobar, the most notorious trafficker of that era, the principal outcome was the fragmentation of the Colombian-dominated hemispheric drug trade. It also was the main catalyst for Mexico’s gradual eclipse of Colombia as the center of drug trafficking.

What such much-touted “victories” in the drug war did not do was dampen either the overall level of drug-related violence or the extent of drug exports to the United States and other retail markets. Exports continue at robust levels to this day to meet the voracious appetites of consumers.

The intensification of the drug violence in Mexico is not the only alarming development. The carnage is also spreading to areas of the country, including Mexico City itself, that previously were not major arenas. Worst of all for Mexico—and for foreign visitors—the violence is now afflicting some of the country’s most popular tourist meccas. Acapulco has achieved the dubious honor of being the country’s murder capital. The Cancun area is now quite violent, with Western tourists becoming some of the victims. Even Los Cabos and Cabo San Lucas, which had been nearly free of drug-related violence, are now experiencing bloody episodes.

In late August, the U.S. State Department issued updated travel warnings covering twenty-three of Mexico’s thirty-one states—including the major tourist areas. A Los Angeles Times article highlights just how bad the situation has become in some of the favorite destinations for U.S. and other foreign visitors.

“In Quintana Roo, the state where Cancun is located, 169 killings were reported from January to July, more than twice as many as during the same period last year.

In Baja California Sur, home to Los Cabos and Cabo San Lucas, 232 slayings have been reported this year, nearly four times as many as during the same period last year.”

U.S. policymakers seem strangely oblivious to the security crisis that is developing in our southern neighbor. While we obsess about who should lead Syria, whether Russia or Ukraine should rule Crimea, and how to achieve an elusive victory after sixteen years of unrelenting failure and frustration in Afghanistan, a dangerous fire is blazing next door.

Ted Galen Carpenter, a senior fellow in defense and foreign policy studies at the Cato Institute and a contributing editor at the National Interest, is the author of ten books on international affairs, including Bad Neighbor Policy: Washington’s Futile War on Drugs in Latin America (Palgrave Macmillan, 2003) and The Fire Next Door: Mexico’s Drug Violence and the Danger to America (Cato Institute, 2012).

Image: Omar Trevino Morales, known as "Z-42" and leader of the Zetas drug cartel, is escorted by soldiers during a media conference about his arrest in Mexico City March 4, 2015. REUTERS/Edgard Garrido