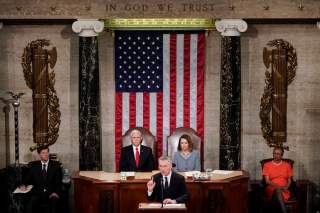 In their article, “Make America Safe Again,” Justin Logan and A. Trevor Thrall conflate the ideas of foreign policy engagement and military intervention. In doing so, they fall into the same trap as the DC foreign policy elite they themselves malign. “The American public does not reject any idea of retreat,” Logan and Thrall write. “Although they favor international engagement, in the abstract, the public has exhibited a decided lack of enthusiasm for many areas of recent foreign policy. Moreover, much of that displeasure concerns the most important elements of recent foreign policy: namely the endless and costly post-9/11 wars dotting the globe.”

International engagement is about so much more than just military intervention and the wars in Iraq and Afghanistan. Indeed, that was the point of our report, Rejecting Retreat, on the 2019 survey conducted by the Chicago Council on Global Affairs that is the target of Logan and Thrall’s critique. Not only is American support for “the United States taking an active role in world affairs” at near-record high (69 percent) today, but Americans understand that such active engagement involves much more than intervening militarily. We specifically asked respondents to select from a list of potential items that they would include or exclude in their own definition of “active U.S. engagement.” At the top of the list: international trade (87 percent included), providing humanitarian aid (83 percent), promoting democracy and human rights (82 percent) and using U.S. troops to defend allies (81 percent). Majorities also include participating in international organizations, providing economic aid, placing sanctions on other countries, stationing U.S. troops in allied countries, conducting drone strikes against suspected terrorists abroad, increasing spending on national defense and increasing spending on diplomatic programs.

Years of Chicago Council polling demonstrate that the U.S. public supports alliances, international trade and maintaining a strong military—though mainly for deterrence purposes. In fact, support for NATO, military alliances and trade has never been higher in decades of polling the American public. The largest majority yet (73 percent) says that NATO is still essential to U.S. security, with all-time highs recorded in the percentages among Democrats (86 percent), Independents (68 percent) and Republicans (62 percent). When asked which approaches make the United States more or less safe, U.S. military alliances (74 percent) and maintaining military superiority (69 percent) are the most frequently cited approaches that contribute to U.S. safety. In addition, Americans have never been as positive about international trade in Council surveys as they are today: 89 percent of Democrats, 87 percent of Republicans and 84 percent of Independents say international trade is good for the U.S. economy. These are unusual, bipartisan shifts towards more, not less, engagement. That is why we entitled our report Rejecting Retreat.

It is true that there are many cases when Americans are reluctant to support military action. We explicitly note in the report that “not all military-focused policies are seen as increasing the safety of the United States. While Americans appreciate the deterrence provided by a strong network of security alliances and military strength, a plurality of Americans (46%) say that intervening militarily in other countries to solve conflicts makes the United States less safe; only one in four say it makes the country safer (27%).” The data also show that Americans are less likely to include intervening militarily in other countries (51 percent included) and selling weapons to other countries (36 percent) in their definition of active engagement. Taken together, we characterize the U.S. public as subscribing to Teddy Roosevelt’s philosophy of “speaking softly and carrying a big stick”—it’s good to have a strong military but even better to not have to use it. None of these results are cited in the Logan and Thrall analysis.

Our report also acknowledges Pew surveys showing that Americans view our recent involvement in Iraq and Afghanistan as a mistake. Logan and Thrall offer up other examples in their piece. And our own results show that majorities are opposed to using force against China. But this reluctance coincides with a willingness to deploy U.S. troops to defend key allies like South Korea if it is attacked by North Korea (58 percent) and the Baltic NATO allies if attacked by Russia (54 percent) when just a few years ago majorities opposed such uses of U.S. troops. Six in ten also favor using U.S. troops to fight against violent Islamic extremist groups in Iraq and Syria (59 percent), aligning with a general tendency to support military action if it is perceived as a direct threat to American interests.

The authors move on to criticize our lack of appreciation for partisanship and for elite influences on public opinion (which was beyond the scope of our 2019 report). Yet, our point was the opposite: that despite deep divisions in our polity, much of the support for the traditional foundations of U.S. foreign policy like alliances and trade are expressed across party lines. Democrats may be reacting against Trump’s policies, Republicans perhaps in favor—but even so, these high levels of contemporary support for a traditional foreign policy based on alliances and trade are difficult to overlook.

All too often commentators on the American public and foreign policy conflate public weariness with foreign military intervention with a desire to disengage from global affairs. Our survey was designed to test that proposition, and it found a historically large majority of Americans who favor an active form of U.S. engagement around the world. And it detailed how Americans wanted to be engaged: through a strong alliance system, maintaining military strength, increased trade, and support for democracy and human rights. In other words, Americans reject retreat.

Ivo Daalder is president of the Chicago Council on Global Affairs and a former U.S. ambassador to NATO.

Dina Smeltz is a senior fellow of public opinion and foreign policy at the Chicago Council on Global Affairs.