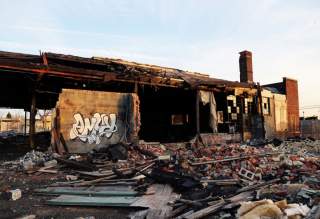 With the new year in full swing, those in Washington would serve the country well with serious reflection about the future of U.S. fiscal policy. Though total federal spending actually declined and the deficit ebbed from its $1.4 trillion high mark, federal debt has remained on its upward trajectory. This is an immensely worrying financial position for the nation.

Congress, not for the first time, neglected to pass spending bills required by the start of the fiscal year so agencies could both plan and operate. Hence the need to work well into December to pass an appropriations bill. This 1,600 plus page “CRomnibus” bill consists of just over $1 trillion in funding through the end of the fiscal year in September 2015. The bill stayed within the spending caps set in the 2013 Ryan-Murray budget deal. The Ryan-Murray budget agreement itself was rightly criticized for pushing off some of the spending cuts required by the Budget Control Act of 2011, most notably on defense, and in essence establishing a new—and regrettably higher—budget. Not meeting this higher spending limit would have been appalling. But the CRomnibus also included $86 billion in spending outside the caps for the Overseas Contingency Operations (OCO) and other so-called emergencies for such things as ISIS, Ukraine and the Ebola outbreak.

Budget limits are intended to restrain spending. The way to do that is to limit all spending, not just some spending. Emergencies happen every year and lawmakers could include contingency spending within these limits during the normal budget process. However, since OCO and other "emergency" spending are expressly outside the budget caps, they are unsurprisingly used to pass new spending without making any budgetary trade-offs. This is the kind of gimmick that irks budget watchers and limited government proponents because it is portrayed as utterly reasonable, but really provides an easy escape from the requirements of spending limits.

Most of the debate revolved around avoiding a government shutdown, or the president’s immigration plan, or relaxing a Dodd-Frank restriction. There was something for every perspective to dislike. And, as with many massive bills like this one, there was plenty of cronyism and corporate welfare. Like reauthorizing the Export-Import bank, which hands out unnecessary subsidies to U.S. businesses that sell internationally, giving them an edge over their competitors; or one of the very last provisions in the bill which relieves a requirement of the Affordable Care Act—for one specific health-insurance company.

But missing from the conversation was a tough examination of the country’s bigger financial picture. It was as if merely keeping within the spending caps was enough. However, the United States is on a tenuous fiscal path and a return to trillion-dollar deficits is less than a decade away.

Though much emphasis is rightly placed on the appropriations process, only about one third of federal spending is actually appropriated. This part of the budget is known as discretionary spending. The balance, often called “mandatory” spending, is not annually appropriated. Spending on such things as Social Security, Medicare and Medicaid is on a sort of budgetary autopilot and grows each year in accordance with the laws and formulas governing the programs. Same for interest on the debt. No true oversight or accountability is actually required for the majority of federal spending. And, nearly all of this spending is exempt from the spending caps. It is this mandatory spending which is putting growing, upward pressure on the budget.

Some say that the picture has improved significantly, so why worry? After all, the deficit in fiscal year 2014 was "only" $483 billion. This is a big improvement over 2009, when total federal spending topped $3.5 trillion, nearly 25 percent of GDP, driven by recession-related spending such as the stimulus package. Accompanied by a stiff decline in tax revenues, the deficit reached $1.4 trillion that year, nearly 10 percent of GDP. But this improvement is temporary. Though spending declined recently, in part due to the spending caps, it returned to $3.5 trillion in 2014. This spending is enormous not just in nominal dollar terms, but also in relative terms. By comparison, at nearly 21 percent of GDP, spending today is well over the 17.6 percent when Clinton left office. Additionally, 2014’s $483 billion deficit, is projected to return to $1 trillion levels in as little as seven years. The biggest budget problem is mandatory spending—fueled by entitlements and interest—which will drive annual spending up by $2 trillion to nearly $6 trillion in a decade.

Debt is another matter. Though the rapid increase in spending and deficits has experienced a short respite, debt has steadily marched up. While shoppers were running up their credit cards this black Friday, the federal government was busy borrowing; total federal debt breached $18 trillion mark—or 102 percent of GDP. Debt held by the public, the debt which is sold and traded in credit markets, reached 73 percent of GDP.

Debt at these levels has worrisome implications for the U.S. economy. High government debt, in and of itself, causes slower economic growth. Such high levels of debt also make it harder for policy makers to respond to unforeseen situations or make policy changes as a larger and larger share of the budget goes to servicing the debt. For example, interest payments are projected to more than triple over the next decade—rising from $230 billion to $800 billion—more than would be spent on Medicaid or defense—as a result of rising debt and modest interest-rate increases. However, if credit markets demand higher interest rates, that scenario could worsen significantly. For example, if interest rates increased to levels seen during the 1980’s, spending on interest would rise dramatically—by $6 trillion through 2023, and more than doubling total interest costs. More troublesome still is the debt trajectory—within a generation, debt held by the public could, under a likely scenario, exceed 100 percent of GDP. Higher interest rates would drive this figure up further.

As noted above, entitlement programs—Social Security, Medicare, Medicaid and the ACA subsidies—are the largest drivers of spending and debt. These programs provide retirement and health benefits for the nation’s seniors, while Medicaid and the ACA subsidies also provide health benefits for low- and medium-income recipients. In a generation, spending on these programs will grow from about 10 percent of GDP to nearly 15 percent. Adding in interest payments, which will triple from 1.3 percent of GDP to 4.7 percent of GDP, this spending alone will reach 19 percent of GDP by 2039. This is huge. Total federal spending averaged 20 percent of GDP from the post–World War II period until the great recession. In terms of growth or sheer size, retirement- and health-related federal spending plus interest on the debt will consume ever more of the federal budget, while the federal budget itself takes a bigger and bigger bite out of the economy.

This spending growth will put tremendous pressure on other parts of the budget and will rightly require a much smaller strategic policy vision than today on policies from education to anti-poverty to defense. This new budget paradigm should leave no room for pork barrel spending, cronyism or corporate welfare policies that reward the politically connected at the expense of everyone else. American taxpayers should not be forced to watch scandals about a bridge-to-nowhere or government handouts to failed companies like Solyndra. For defense, spending should be focused on clear needs, rather than desired wants. But, while these kinds of changes make sense, they still will not stem the rise in spending and debt. That will mean tackling entitlements.

In the early days of the great recession, many drew comparisons between large welfare- and entitlement-driven debt burdens of countries like Greece and future debt woes of the United States as a warning for policy makers. While there are lessons to be learned from the folly of such big-state government policies, the travails of exotic countries did little to inspire solutions from policy makers at home. But there are plenty of domestic lessons to inspire change. Take Detroit. The city’s litany of sad woes at the time of bankruptcy are now common knowledge: 40 percent of the city’s 88,000 streetlights didn’t work, there were 78,000 abandoned or blighted homes, unreliable trash collection, police response time of up to fifty-eight minutes, slow ambulance services, high arson rates and an appalling violent-crime rate. Plus the highest income and property tax rates in the state. The city was broke and in debt, but this sorry state of affairs didn’t develop overnight—it developed over decades. Even as the seriousness of Detroit’s problems became more clear, the city’s leaders—despite several attempts—never had an adequate plan of action. After a long and often-torturous path, the city of Detroit landed in bankruptcy court.

When it emerged late last year, the city’s businesses, public leaders, employees and retirees, art museums, private foundations and credit holders—along with state lawmakers—had been put through the ringer. The “grand bargain” settlement included pension and retiree health-care cuts, debt restructuring (e.g. write-downs by creditors), private donations, tax and revenues measures and more. Plus a pricey bailout from the state. The settlement is certainly a mixed bag and will require discipline from the city’s leaders to carry out. But it was the lack of a complete, realistic plan that led the city to the courthouse in the first place. It’s too early to know whether the settlement will succeed, but the city is starting to move forward and small improvements can already be seen in city services and in some communities. To learn relevant lessons from Detroit’s experience, however, requires asking what drove the city to this point.