America's Blind Ambition Could Make It a Victim of Global Competition 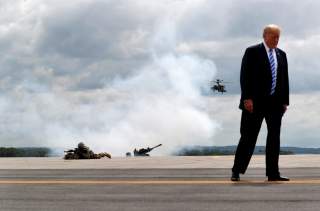 Nearly two decades after the attacks of September 11, 2001, the United States finds itself conducting an ever-expanding campaign against a resilient and adaptive terrorist threat, taking it further and further beyond the theaters of Afghanistan and Iraq where its efforts were initially concentrated. A recent assessment of America’s counterterrorism missions across Africa, the Middle East, and South Asia characterizes them as “sprawling, Whac-A-Mole conflicts . . . often hidden from public view by successive administrations wary of testing the public’s tolerance for unending war and surprising casualties in far-off lands.” The nature of permanent war is such that it cannot be won, only stopped or continued; in the latter case, when it is continued without a discernible objective to guide it, inertia comes to supplant strategy as its principal motor.

In view of that reality, as well as the growing strain under which the postwar order finds itself, members of the U.S. foreign-policy establishment widely agree that the Trump administration has been prudent to shift America’s focus from counterterrorism to what the Pentagon’s national defense strategy calls “the reemergence of long-term strategic competition.” The impetus for this recalibration would appear self-evident. A resurgent China has emerged into a formidable economic and technological competitor; continues to consolidate its control over the South China Sea, one of the world’s most vital maritime junctures; and is increasingly leveraging national-level political dysfunction in Washington to portray the United States as an unpredictable ally and an unreliable steward of globalization. Russia, meanwhile, has hived off territory in its near abroad, is abetting disintegrationist elements in the European Union, and continues to support Bashar al-Assad’s brutal rule in Syria.

Unfortunately, though, at least as presently conceptualized, great-power competition does not offer much prescriptive guidance. While one can understand the term as a condition (that is, today’s world order is increasingly defined by competition between the world’s preeminent power and a host of major powers, especially China and Russia) and/or an instrument (that is, Washington must participate in this competition to accomplish certain goals), it does not readily lend itself to a strategy. Noting that there is little understanding of its contours and what the construct “might imply for U.S. national security or U.S. defense policy,” a team of RAND analysts advised late last year that no “country should embark on such a broad-based global competition without a clear sense of the path ahead.” Forging that path will require Washington to answer some basic questions, among them the following four:

First, who is America’s principal competitor? The Trump administration’s national-security strategy and the aforementioned national-defense strategy often refer to China and Russia jointly. That two countries of such significantly different economic proportions can both be considered great powers—China’s gross domestic product in 2017 was nearly eight times as large as Russia’s ($12.2 trillion versus $1.6 trillion)—suggests that analysts should delineate more clearly the criteria for earning that designation. Many observers accordingly question the pairing, noting that Beijing is a resurgent, selective revisionist, while Moscow is a faltering, disruptive opportunist. Among this group, most agree that China will pose a greater long-term challenge to Washington. History reminds us, though, that declining powers can pose more acute short-term disturbances.

Second, over what specifically is the United States competing? Does it believe that great-power competition extends to every issue area and geographic theater? If so, do its vital national interests suggest a hierarchy of contestation? That is, does Washington deem certain issues and theaters to be more critical than others? While its sheer preponderance of power gives it a singular capacity to elide the necessity for painful strategic choices, a foreign policy that either cannot or refuses to prioritize will inevitably collapse under the weight of its ambition. Strategy, after all, is a necessity that entails the continual reallocation of finite equities, not a luxury that permits the ongoing creation of new ones. Thus, for example, the United States cannot credibly maintain that the Asia-Pacific’s evolution is of principal importance to its national interests while concurrently avowing that it must be as engaged in that region as it is in the Middle East and in Eastern Europe.

Third, and perhaps most importantly, what is America’s ultimate objective?

– Is it to preserve the country’s present level of preeminence? That outcome would be a near impossibility on account of the so-called “rise of the rest,” even if the United States were to commit no self-inflicted strategic errors.

– Is it to prevent China’s comprehensive national power from passing a certain threshold? If so, then what is that threshold, and what strategy would Washington need to employ? While many of the allies it would need to enlist in counterbalancing China’s resurgence share its apprehensions about Beijing’s human-rights record, technological progress, and geopolitical ambitions, few are likely to participate in an effort to contain it, especially not if and as it continues to play a more central role in global growth.

– Is it to forestall the emergence of a Sino-Russian condominium that matures from a partnership of convenience into an alliance of consequence? While historical suspicions and disparities in capability will continue to weigh on the progression of Beijing and Moscow’s relationship, the overlap in their grievances virtually assures that it will continue to move forward across multiple dimensions—and at an accelerating pace if the United States treats them as a joint strategic challenge. What respective end states does Washington seek in its relationships with China and Russia?

Fourth, if the United States is unable to identify a long-term objective and attendant metrics for gauging its progress towards that end, how will it prepare its economy and its society for infinite competition of an indefinite nature?

The aforementioned questions are a modest invitation to engage in a more rigorous discussion of the construct that now arguably animates the U.S. foreign-policy establishment more than any other. A doctor would not administer medication to a patient before diagnosing a condition; nor should a country pursue a course of action without clarifying the challenge(s) it is aiming to manage. If the United States allows competition to become an imperative in and of itself, then it will invariably conflate action with accomplishment, thereby compounding the extant gap between its domestic resources and external commitments. There are perhaps fewer surer guarantors of strategic insolvency than ambition that is perpetually unable to find a mission.