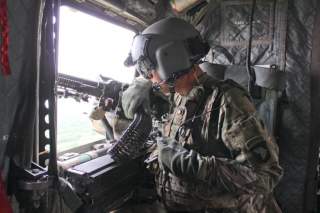 With the Islamic State almost completing its takeover of Iraq’s Anbar Province with the fall of Ramadi, the previous don’t worry line out of Washington is giving way to serious questions of strategy, particularly amongst U.S. allies. It may indeed be time to review the entire strategy President Obama announced in September of 2014.

That strategy, which Coalition unity hinges, was based on a number of premises, many of which may now be proving to be incorrect.

The most important consideration was that there would be “no boots on the ground,” U.S or Western and that the brunt of any ground offensive action would have to be borne by Iraqi’s and by some undefined proxy in Syria. It was also hoped that regional nations would step up to police their own neighborhood.

As a consequence, that single premise limited the spectrum of U.S. and coalition support to airpower and training assistance to the Iraqi’s.

But it has become increasingly evident that the Iraqi Army has been rotted from within and cannot even defend land it controls much less capture ISIS-controlled territory. That was expected to a degree and the promise was that airpower would be able to buy time by containing and degrading ISIS until the Iraqi Army could be trained and re-equipped.

Yet the air campaign is proving remarkably unable to wholly contain ISIS. It has had some modest successes, most notably in areas like Kobani and around Mosul, where it has degraded ISIS at the fringes. But in the main there is insufficient airpower available to gut the economic wherewithal of the ISIS state and the recent success in Ramadi demonstrates that ISIS can move where airpower isn’t. Indeed, key locations such as the oil fields on Baiji and its refineries are still in dispute.

As all this suggests, the Coalition’s undisputed technical superiority does not translate into military success.

On the ground, to recapture Mosul, some 60,000 troops need to be trained, and the Coalition is far from achieving that goal. As a consequence, the only successful recapture of land has either been by Kurdish Peshmerga fighters, or by Shia Militias—creating in essence a Catch 22 for both the United States and the Coalition.

The ultimate political aim has been that a resurgent Iraqi Army would be the flag bearer for a unified and non-sectarian state, but the need to use sectarian groups to stop ISIS ultimately undermines any effort at Sunni reconciliation. Laurent Fabius, France’s foreign minister recently acknowledged as much, stating, “We linked the coalition's support to political commitments by the new Iraqi government, what we call an inclusive policy…. This contract is what justified our military engagement and I say clearly here that it must be better respected."

Trial balloons being floated to increase U.S., and by extension, Coalition ground troops in wider roles have not been received well by key allies. For example, retired General Sir Richard Dannatt, the former UK chief of general staff, wrote that David Cameron should consider contributing up to 5,000 UK soldiers, only to be utterly rebutted by the prime minister. In Canada, which is nearing an election, any suggestion of an increased ground role would be met by cries of mission creep and inevitably become a key electoral issue. Other allies, such as France, Denmark, Australia, Belgium, Italy and the Netherlands, are unlikely to be receptive either given that—for example—only Canada even ventures into Syrian airspace.

So these are ultimately the challenges facing the president in his deliberations. His best hope lies in fully resourcing the air campaign and increasing the rate and tempo of Iraqi Army training as only this option would maintain the cohesion of the coalition. He may of course opt to greatly increase U.S. land forces, and that might indeed be the only way to defeat ISIS, but in doing so, the United States risks being very much in the lead with only a few nations following.

There is of course a more unthinkable option which is to accept what appears to be inevitable; namely, what is left of the Iraqi government to fall into Iran’s orbit and hope that the two may stop ISIS. But stopping ISIS is not the same as defeating it, and the real risk is that permitting it to exist will alter power dynamics in the region for years to come... with unpredictable consequences.

George Petrolekas is on the Board of Directors of the CDA Institute and co-author of the 2013 and 2014 Strategic Outlook for Canada. Mr. Petrolekas served with NATO, and in Bosnia, Afghanistan and Cyprus and as an advisor to senior NATO commanders.