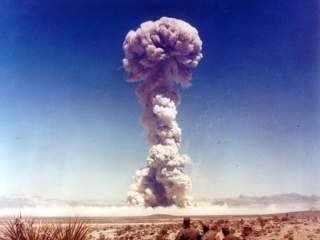 If the Cold War had turned thermonuclear, we know that the United States and Soviet Union would have been devastated.

But now for the first time, we know which Russian cities would have been destroyed, and why. The U.S. government has finally declassified the 1950s Strategic Air Command target list, which would have dispatched American bombers and missiles on nuclear strikes across the Communist world.

"SAC listed over 1200 cities in the Soviet bloc, from East Germany to China, also with priorities established," according to the National Security Archive, the non-governmental organization which requested the declassified information. "Moscow and Leningrad were priority one and two respectively. Moscow included 179 Designated Ground Zeros (DGZs) while Leningrad had 145, including 'population' targets."

But at least in theory, this would not have been wanton destruction or terror bombing. There was supposed to be method behind the nuclear madness. SAC's priority was to destroy Soviet airpower before Soviet bombers—this was before ICBMs were developed in the 1960s—could strike American and Western European targets. Some 1,100 airfields were targeted and prioritized, with the Soviet Tu-16 Badger bomber bases in Bykhov and Orsha in Byelorussia at the top of the list. Once Soviet airwar capability had been destroyed, and assuming both sides were in any state to continue the war, then Soviet industry would have been bombed next.

And so would a lot of innocents. The SAC target list, compiled in 1956 and published as part of a 1959 nuclear weapons planning study, deliberately included civilian populations.

The SAC plan specified "the 'systematic destruction' of Soviet bloc urban-industrial targets that specifically and explicitly targeted 'population' in all cities, including Beijing, Moscow, Leningrad, East Berlin, and Warsaw," noted National Security Archive researchers. "Purposefully targeting civilian populations as such directly conflicted with the international norms of the day, which prohibited attacks on people per se (as opposed to military installations with civilians nearby)."

Most of the 800 pages of documents consist of lists of targets and their associated alphanumeric target numbers. SAC planners assumed in 1959 they could strike with 2,130 B-52 and B-47 bombers, RB-47 reconnaissance aircraft, and F-101 fighter escorts. In addition, there would be 376 nuclear-tipped cruise and bomber-launched missiles, as well as early intermediate-range missiles. The 1959 study also states that missiles—this was before ICBMs were developed in the 1960s—had such a low chance of destroying their targets that manned bombers would be the primary weapons.

Because SAC was so fixed on quickly knocking out Soviet air power, H-bombs would have been dropped to explode on the ground rather than in mid-air. While airbursts would have produced more heat and radiation, the focus on was achieving maximum blast damage to destroy Soviet aircraft and bases, despite some unintended side effects. "While the objections to surface burst and the probability of radioactive fallout affecting friendly forces and people have been considered, the requirement to win the Air Power Battle is paramount to all other considerations," said the SAC study.

However, SAC defined the Soviet airpower infrastructure quite broadly, to include any command and industrial centers that could support a Russian air campaign. Thus Moscow was listed as having numerous military command centers, aircraft and missile factories, atomic weapons laboratories and oil refineries.

Despite being a Nuclear Age force, SAC's strategy more resembled the U.S. bomber offensive against Germany and Japan in World War II than twenty-first century warfare. Concentrating on the Soviet air force and its infrastructure would have been familiar goals to B-17 and B-29 commanders (which were indeed the people who ran SAC in the 1950s, including Curtis Lemay). Though it also seems a quaintly long-war strategy, as if the Soviets were really going to capable of mass-producing bombers and nuclear weapons after the initial nuclear exchange. The belief that missiles were too unreliable, and only manned bombers could be trusted, sounds much like the drone vs. manned aircraft debate today.

Did SAC's targeting strategy make sense? The better question is, who cares? Fortunately for the human race, we never had a chance to find out.