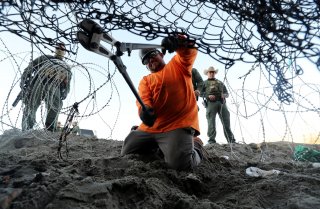 Who won the government shutdown showdown? Who lost? My answer: who cares?

With the media and political classes fixated on the essentially frivolous question of winners and losers, the true meaning of the shutdown drama gets lost. What that thirty-five-day governmental dysfunction tells us is that the country is locked in a crisis of definition, reflected most starkly in the high-tension immigration issue. Although immigration isn’t the whole story, it is a proxy for the broader question of what kind of country America will be in ten or twenty years. That’s a question of profound significance, and it has driven a wedge through the American republic like an ax through cordwood.

By way of illustration, consider the fate of the thirty-first Congress when it arrived in Washington in December 1849 to begin the process of governing. The first order of business was the election of a House speaker. Seemed simple enough, part of the regular order. But the House couldn’t elect a speaker because nobody could get a majority. Without a speaker, the House couldn’t organize and committees couldn’t meet. Without a functioning House, the Senate couldn’t do business. The president couldn’t send up his annual message and set the national agenda. Congress couldn’t appropriate money. The government froze.

By the thirteenth ballot, some argued for abandoning majority rule and allowing a plurality winner. But there was no majority for that either. The problem was that the country was hopelessly split over the definitional issue of slavery. For decades, Northerners, while abhorring that awful institution, had accepted it as part of the Southern way of life. But now, in the wake of James Polk’s big territorial expansion and fears of greater political clout for the slave empire, that was becoming less and less acceptable in the North. The South bristled at this turn of events.

As the issue took on more and more emotion, both Democrats and Whigs were split along sectional lines, giving the balance of power to the new antislavery Free Soilers. But the stiff-necked Free Soilers refused to put any conventional politician into the speakership.

The deadlock continued for three weeks and sixty-three ballots. It was broken only when weary lawmakers finally accepted a plurality solution. The rules were tossed aside so the republic could stay intact. “The long agony is over,” reported Washington’s Daily Union.

But it wasn’t over. The definitional slavery issue remained a festering sore upon the body politic for another dozen years. Ultimately, the issue broke the country’s governmental system, which was restored only after a civil war, some 750,000 wartime deaths, and mountains of lingering civic rancor.

Today America faces another definitional crisis. Roughly half of Americans want to remake the country through the force of diversity politics, large-scale immigration (both legal and illegal), and the ideology of ethnic, racial, and sexual identity. And roughly half of Americans oppose all that and want to stop the juggernaut of elite power that is pushing the American transformation.

Consider, first, immigration. It is often heard from commentators and politicians that both parties want to secure the border but differ only on how to do it. This is untrue. Many in the elites, of both parties, simply aren’t concerned about border security. If they were, how did they allow into the country the estimated thirteen million illegals now here. The laxity of the elites in addressing this growing crisis has driven a wedge through America, and now that wedge is widening.

Or consider this question: What is an appropriate level of immigration and is it reflected, say, in the percentage of foreign-born residents at any given time? In 1970, that number was 4.7 percent; in 1980, 6.2 percent. Now it approaches 14 percent—which is the highest in our history, with the exception of the period from around 1910 to around 1920, after a large wave of immigrants from Eastern and Southern Europe beginning in the 1890s. When it reached that 14 percent number, the country developed a strong concern about assimilation, and the result was legislation curtailing the influx, both in terms of numbers and of the origins of people allowed in.

Now we’re back at that level, and it shouldn’t be surprising that a similar civic concern has emerged in the polity. And yet if you ask pro-immigration liberals what they think that percentage number should be, you can’t get an answer. There doesn’t seem to be any number that raises concerns among these people regarding the challenge of a smooth absorption.

The conclusion is unmistakable: part of America wants to transform the country through diversity promulgated in part by mass immigration. And part of America opposes that transformation and hence wants a big immigration curtailment. When you strip away the maneuvering, the legislative clever-speak, and the efforts at finessing the issue, it becomes clear that this isn’t just a matter of tinkering with current law. This is definitional.

And that’s why we had the shutdown. Donald Trump, during his presidential campaign, gave voice, for the first time, to those concerned about the gathering national transformation fostered by the elites of both parties. In doing so, he rendered a border wall the dominant symbol of his more restrictionist immigration stance. Let’s leave aside, for purposes of this discussion, the merits of the nettlesome wall issue and get to the more significant underlying reality—namely, that the emotions surrounding the wall debate, in connection with the government shutdown, suggest that this is more than just a matter of degrees that can be adjudicated in a spirit of compromise. Speaker Nancy Pelosi called the wall “immoral,” which suggested there can be no compromise at all. And Pelosi’s adamant refusal to discuss the matter confirmed that sentiment.

Ultimately, of course, there will be some kind of compromise. But most likely it will be like the Compromises of 1850 on slavery, in the wake of that 1849 government shutdown. Ultimately it couldn’t hold because it didn’t address the underlying definitional issues. As Lincoln so provocatively said a few years later (quoting scripture), “A house divided against itself cannot stand.”

But before it falls a house divided against itself generates a tremendous amount of political emotion and anger—the kind that stifles measured civic discourse.

Consider now the remarkable spectacle of what happened to that group of teenage boys from the Covington Catholic High School in Kentucky while they were standing outside Washington’s Lincoln Memorial waiting for a bus. They were accosted by a group of black adults who berated them in highly disgusting racist language, and then they were put upon by a drum-thumping, chanting American Indian “elder” whose purpose couldn’t be easily discerned but who seemed to be mocking the boys.

As everyone now knows, a brief slice of videotape seemed to show the boys manifesting disrespect toward the so-called elder, and all hell broke loose. The savagery of the verbal attacks against the boys was something to behold. Even after reviews of the full videotape revealed that that interpretation was utterly false, many of the attackers refused to walk back their rancor. Some quietly deleted their hostile tweets, though, demonstrating that they lacked the character to acknowledge publicly that they had gotten it wrong.

And they had gotten it horrendously wrong. Here were ordinary teenage boys who were viciously attacked verbally by adults, and yet they were immediately cast as the villains.

Why? Because they were boys; they were white; they were in DC to join an anti-abortion rally; and they were wearing red MAGA caps, signifying support for the sitting president of the United States, who garnered the support of nearly sixty-three million Americans at the last presidential election.

If you want to transform America through an ideological push for diversity, you know your most consequential resistance will come from white men. And if this definitional issue is considered paramount for the health and sanctity of the American republic, then it isn’t enough merely to exclude white males, as Jesse Jackson did in 1984 when he created his famous “rainbow coalition” of blacks, browns, yellows, reds, gays, lesbians, and women—in other words, everybody except those pesky straight white males. No, now the aim has to be to traduce them, marginalize them, and destroy their civic standing so that they can’t influence the debates of the day.

This is seen in those venomous attacks on the poor Catholic boys of Kentucky. It is seen in the American Psychological Association’s new “guidelines” on how to eradicate “traditional masculinity.” It is seen in the way colleges have handled allegations of sexual abuse on campus—by destroying reputations on the basis of loaded and unfair juridical proceedings.

Where does all this lead? Wherever it leads, it can’t be good.

The writer Andrew Sullivan captured some of this in responding to an outlandish harangue by New York Times columnist Charles Blow, who suggested the MAGA caps had become “the new iconography of white supremacy . . . [i]n much the same way that the confederate flag became a white supremacy signalling device.” Equating the political symbol of a president who captured 46 percent of the popular vote to the Confederate flag and white supremacy, wrote Sullivan, was not the language of democratic politics. “It is the language of civil war.”