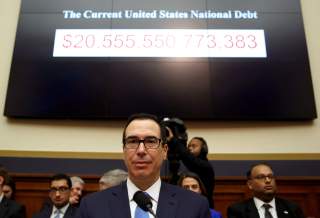 The U.S. economy is in the midst of a prolonged period of economic growth, relative peace and increasing prosperity. It has prompted lawmakers to spend recklessly, seemingly without consequences. But every wild party has to wind down sometime. And for Congress, the debt hangover is near.

Most everyone enjoys a good party, but as folks down more and more alcohol, they lose more and more restraint. They become even more likely to keep overindulging. But ultimately, the sun comes up; the party ends, and the hangover sets in.

Over the years, too many lawmakers have become drunk on spending. And in Washington, DC the party is going full-tilt.

So far, they’ve run up a tab of $20.6 trillion in debt. That’s more than our Gross Domestic Product. They’re now in the habit of burning through more than $4 trillion every year and are on track to start racking up trillion-dollar deficits every year forward.

And now they’ve agreed to supercharge the deficit.

One way to think about the budget deal just struck by Senate Majority Leader Mitch McConnell, a Kentucky Republican, and Senate Minority Leader Chuck Schumer, a New York Democrat, is to imagine two buddies driving to the liquor store in the middle of the night to get more booze for a raging party. And because they are already drunk, they buy way more booze than makes any sense to any sober person.

The massive budget deal just passed by Congress calls for way more spending than any reasonable person would even consider. It takes an already deficit-ridden balance sheet and piles on what amounts to an additional $420 billion in spending, when interest costs on debt are included. That’s more than a 10 percent increase over last year’s $4 trillion budget.

To make this happen, lawmakers had to blow through the spending caps it imposed on itself in the Budget Control Act of 2011. And they exceed those caps by nearly $300 billion. That’s three times more than any of the spending cap increases enacted under President Obama.

Lawmakers could have prioritized defense spending and paid for it with long overdue reductions in bloated domestic programs. That’s what President Trump had proposed in his budget submitted to Congress last year.

There was another way. So what if lawmakers, whose support was necessary to reach the Senate’s sixty-vote threshold for passing spending bills into law, would hold out unless they got everything they wanted for discretionary domestic programs? That would have allowed their fiscally sober colleagues to send a powerful message, identifying those lawmakers willing to provoke a partial government shutdown over excessive spending demands that will bankrupt the next generation even faster.

But leadership chose a different, tipsier strategy. They didn’t even announce the deal until fewer than forty-eight hours before the shutdown deadline. That gave few, if any, lawmakers sufficient time to review the deal. And it gave outside fiscal watchdog organizations virtually no time to organize grassroots opposition.

But that’s how indefensible legislation is usually presented nowadays: Dropped at the last minute to limit analysis, foreclose the organization of effective opposition, and provide no time for the consideration of better alternatives. It’s bipartisan brinksmanship, and it stinks.

But the worst is yet to come. Soon we’ll be witnessing a frantic spending spree as federal agencies will rush to spend the more than $140 billion in funds that will otherwise expire at the end of this fiscal year.

By the time the spending bill, which will appropriate those funds among the various agencies and programs, is enacted into law in late March, federal agencies will have approximately six months left to find willing takers for all those hard-earned taxpayer dollars.

Too many of these dollars will be wasted, padding the pockets of well-connected contractors and their friends or buying needless goods and services merely to avoid “losing” those funds.

There are no trophies for fiscally responsible bureaucrats.

Meanwhile deficits will skyrocket to levels not seen since the Great Recession and the next economic crisis is brewing.

This party, too, will end. The debt hangover is near.