America's Enemies Beware: The U.S. Air Force Is Set to Soar (and Become Even Deadlier) 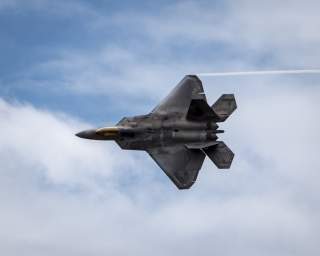 Between 2014 and 2035 the U.S. Air Force is set to become a new force that looks very different than it does at present. As the military service defined by its platforms—fighters, bombers, airlifters, refuelers, surveillance and reconnaissance and command and control—the new Air Force will begin to look more and more like the service from whence it came: the Army. In contrast to the present Air Force, the Army is defined by its personnel, not weapon systems. The soldier is the weapon with a mantra of “boots on the ground.” As the Air Force transforms away from a weapon system-centric force, dramatic change will occur. Airmen will be the focus, and the mantra may well be reminiscent of the Terminator series, “Skynet is watching.”

The Air Force has, since its inception, been defined not by Airmen, but by airplanes. Thus, Eddie Rickenbacker, a famous race-car driver and fighter pilot, came to epitomize the daring of the new age of flight. Charles Lindbergh was also heralded for his amazing feat of stamina and courage for being the first to cross the Atlantic Ocean in an airplane. Apart from these icons, however, Americans and the early Air Force focused on technology. There was a desire for airplanes that were bigger, faster and more powerful. Chuck Yeager, perhaps the Air Force and the nation’s most famous test pilot, was idolized for his efforts to push aircraft to their limits in speed and altitude.

For the Air Force, the onset of the Cold War and the existential threat posed by the Soviet Union served as the impetus to heavily invest in the development of a technologically superior air force. President Eisenhower used the service as an inexpensive hedge against the Soviet Union with the nuclear force representing the guarantor of American sovereignty. This led to the rise of the bomber barons and the focus on the long-range bomber as the single most important platform in the nation’s defense. During the Cold War, bomber generals ruled the Air Force. The culmination of a focus on long-range strike was the B-2 stealth bomber. However, as the Cold War ended, the bomber barons were cast aside and a new platform rose to prominence.

The “fighter mafia,” led by Col John Boyd and General Wilbur “Bill” Creech, focused on more-capable fighter aircraft, and focused training on preparation for aerial combat. Boyd eschewed bigger and faster for smaller and more maneuverable. The F-16 and F-15, both incredibly capable fourth-generation aircraft, and associated smart weapons, made the fighter the weapon of choice from operation Desert Storm to Enduring Freedom. The ability to send a single smart bomb through a specified window was a fundamental breakthrough in the advancement of technology in warfare. Since precision required far smaller bomb loads to accomplish a single mission, fighter pilots were able to rise within the Air Force to a level of dominance they had never previously achieved. The development of the F-22 Raptor represents this focus on the fighter. No other fighter on earth can touch it, even as Russia and China are attempting to develop their own fifth-generation fighters.

While Operation Desert Storm (January-April 1991) was ostensibly the first post–Cold War conflict, the U.S. Air Force never left the Middle East. Rather, Airmen and their fighters stayed behind to enforce no-fly zones over Iraq (1991-2003). When the United States responded to the attacks of September 11, 2001 (Operation Enduring Freedom), fighters again played a visible role in the opening attacks on the Taliban and Al Qaeda in Afghanistan. In more than a decade of operations in Afghanistan, air support to troops on the ground played a critical role in American success. When Operation Iraqi Freedom began in March 2003, precision-guided munitions delivered by fighter aircraft again played an important role in combat, as they would throughout the conflict (2003-2010). This period of heavy fighter use also set the stage for change.

The larger “Global War on Terror” led to the rise of the remotely piloted aircraft (RPA), leading many to believe the future of the Air Force would be pilotless. While RPAs play a prominent role in contemporary operations, they represent only a small part of the future Air Force. Other concepts like big data, cloud computing, ubiquitous sensors, quantum computing and improvements in theater command and control are less visible, but more important. The difficult nature of sifting and cataloging terabytes of surveillance and reconnaissance data and delivering actionable intelligence to the warfighter is driving the development of bigger data pipes and bringing more computing power to the problem.

As the United States pivots toward the Asia-Pacific, even as it strikes ISIS targets, strategic planners are forced to consider the enormous challenge presented by the tyranny of distance in the Pacific. The Air Force will have to adapt to re-create the capabilities warfighters have come to expect in Iraq and Afghanistan—only on a much larger scale. This will transform the Air Force into a truly global force. Coupled with new weapons that can range for hundreds, perhaps thousands, of miles, the ability to not just see everywhere, but actually find, fix, track, target, engage and assess anywhere on earth at the speed of light will usher in what the Chinese military refers to as “informationized warfare.”

To be globally aware is what makes Skynet of Terminator seem so menacing. The idea that the United States can deny an adversary a place to hide should give allies and adversaries alike cause for concern. Yet at the same time, such a capability also has the potential to improve the effectiveness of American conventional deterrence—increasing the prospects for peace. No longer will terrorists or rogue nations be allowed safe havens from which they can train, equip, launch attacks or develop massively destructive weapons. Instead, they will be subject to the same effect that streetlights have on petty crime. As the Air Force’s gaze becomes more pervasive, those that would do evil will come under scrutiny and, if necessary, attack. The net effect should be improved deterrence against attacks on American interests as would-be foes come to realize the inherent danger of their activities.

American Airmen will also be transformed. The new Air Force will identify much less with platforms as virtually any computer, network, aircraft or spacecraft becomes a platform not only to acquire, move and process knowledge, but also to deliver long-range weapons. Tankers, airlifters and computers will be just as likely to deliver a killing blow as fighters and bombers have been in the past. As opposed to the vision of Skynet as a dispassionate, computerized, sentient being, the new Airman will be a cyber-aided warrior with tremendous reach. Aided by a global network that ties them into the “hive-mind,” Airmen will operate freely in the cognitive domain from anywhere on Earth as they securely share information across vast distances—giving Airmen prominence over the weapon systems they operate.

This new Airman will require much more training and sophistication. To realize the full potential of an Air Force with super-empowered Airmen, they will need to understand how to incorporate, analyze and employ data from a globally connected and globally aware sensor and strike network. Thus, while survival training in the past consisted of learning to live off the land in a hostile environment, future Airmen will learn not only to survive, but thrive in a hostile information environment. Ubiquitous global cyber on-ramps will ensure that Airmen can become a useful part of “Skynet” no matter where on Earth they roam.

Simultaneously, American Airmen will interface and engage their peers from allied and partner nations. They will help to educate and train them, enabling them to take on the burdens of keeping the peace in their own regions. American Airmen will harness the power of computing to become increasingly better communicators. They will establish relationships that form the bonds of friendship and trust needed when a crisis arises. These bonds will strengthen and help preserve the relations formed with like-minded nations.

As this new U.S. Air Force takes shape and Airmen gain the training and experience needed to operate in this new world, they will innovate and develop the tactics, techniques and procedures to ensure success on a future informationized battlefield. And while America may occasionally require “boots on the ground,” the nation will have “eyes in the sky” that are constantly watching, ever aware and fiercely defensive of American interests. Driven by the ability of Airmen to think critically in a strategic environment dominated by information, the Air Force of 2035 will certainly look different than the Air Force of the present as it becomes increasingly important to employ Air Force systems in new and innovative ways.

Dr. Robert S Spalding III is a B-2 pilot and former military fellow at the Council on Foreign Relations.

Dr. Adam Lowther is a Research Professor at the Air Force Research Institute.