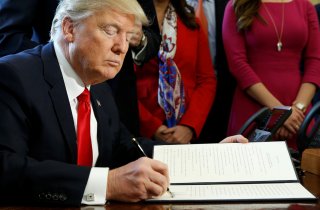 President Donald Trump has given up his “hope” that the nation can return to work by Easter following a bout with a deadly pandemic. The official Washington recommendation of social distancing, lockdowns, and quarantines designed to prevent people from spreading the coronavirus, also known as COVID-19, now extends to April 30. Nothing says that Washington will not have to extend the directive again. Everything says that the longer this shutdown lasts the deeper into recession the U.S. economy will fall and the more trouble it will face recovering quickly.

Beyond this, forecasting in this environment is a fool’s game. After all, economic projections involve insight into the course of this virus and its lethality, both of which remain largely a mystery even after weeks of intensive study. But at least now, the economy has the help of huge fiscal and monetary policy responses. If these actions cannot ensure a recession-free future, both—in their scope and nature—do promise to mitigate the economic damage and promote a faster recovery than would otherwise have been possible. As Washington began to develop its responses, there was a risk that policy might miss the unique nature of the economy’s economic predicament and adopt measures out of the standard anti-recessionary playbook. To the credit of both the government and the Federal Reserve, that has not happened. Some policies are of the standard sort, but most do focus on the situation’s special needs.

Part of the risk, as Washington began this process, centered on the size of both the monetary and fiscal programs. There is in Washington always an element that tempers the size of any action out of budgetary concerns. And indeed, some have expressed reservations over the debt implicit in the government’s $2.0 trillion bill and comparable concerns about what the Fed is doing. While attention to budget balance always has a place in policy debates, in this particular case it was helpful that such concerns had little influence. A budgetary focus is most appropriate when large deficits emerge from the ongoing business of government. It is much less of a concern when dealing with a national emergency. As in the case of aid in a natural disaster or a war, success in meeting the emergency implicitly signals an end to the special policies and the cash flows they demand. There is every reason to expect that when this emergency lifts, today’s special policies can reverse and, even if some debt lingers, relieve the nation of any ongoing budget concerns.

The nature of these recent policy responses also shows a welcome recognition of the unique character of this situation. Today’s economic pressures, though they are driving down every measure of economic activity and well being, are far from those of a typical recession. Typically, recessions reflect a shortfall in demand. One sector of the economy becomes unbalanced, and the resulting cutbacks multiply throughout the entire economy. Standard policy remedies reasonably aim to substitute for that shortage of spending, either through direct government outlays or by inducing businesses and individuals to spend more. Today’s problems, in contrast, stem from supply shortages. People cannot get to productive work, while interruptions in trade have left even operations that otherwise might function short of parts and supplies. Retail facilities have simply shut down under government orders.

The object today, then, beyond giving the medical establishment needed funding, is not, as in a typical recession, to substitute for lost demand, but rather to keep the present interruptions from morphing into a classic recessionary demand shortfall. That would involve supporting both large and small businesses so that they can sustain payrolls and avoid bankruptcies while the shutdowns and quarantines curtail or entirely interrupt their revenue flows. That would also mean channeling financial help to individuals otherwise put out of work temporarily by today’s emergency so that they do not have to alter their lifestyles inordinately, much less permanently. Though not all the measures coming out of the Fed and the government focus on these essentials, most do.

Some of what the Fed has done is pretty standard stuff. Interest rate cuts are a prime example. They might otherwise induce spending, but the uncertainties of the current situation raise questions about who would borrow for expansion now even at zero cost. Also fitting into the standard playbook are the billions earmarked for purchases of Treasury bonds and mortgage-backed bonds in the open market—what the Fed typically refers to as “quantitative easing.” These add liquidity to financial markets, an important step in a classic recession, but these specific purchases are not especially useful in helping pressured businesses and individuals through their immediate predicament.

Other actions, however, show a welcome focus on this matter’s particulars. The Fed’s decision to reconstitute the Term Asset-Backed Securities Lending Facility from the 2008–2009 financial crisis, for instance, would put funds into credit card and consumer loans that might help sustain lifestyles for individuals suffering from immediate income interruptions. Also helping in this way is the money the Fed is making available for four-year bridge financing for companies under immediate pressure. Such loans might enable these firms to keep more employees on payroll for longer than otherwise. Also, slowing the slide from an emergency to a recession are plans to support commercial paper markets where many corporations go for immediate financing needs and a plan to extend credit to lower-quality borrowers, including small businesses through the so-called Main Street Business Lending Program.

Most of what recently came out of Congress also qualifies as tailored to the specific needs of this unusual situation. There are, of course, provisions to make $150 billion available to the health-care system and a like amount to state and local governments strained by the containment measures taken against the spread of the coronavirus. For individuals already deprived of income by the emergency, the legislation expands those who qualify for unemployment insurance, raises its maximum payout, and extends the term it pays beyond the typical twenty-six weeks. The bill would also give lower-income Americans a check for $1,200 and $500 for each child. Though this might address immediate economic needs, it offers little if the troubles linger.

Perhaps most impressive are the measures directed at businesses to help them stave off bankruptcy and keep their employees on the payroll. The bill provides $350 billion to the Small Business Administration (SBA) for lending to what is effectively the nation’s largest group of employers. In some cases, it even offers debt forgiveness when firms use the loan to maintain payrolls. The legislation also provides $500 billion as a backstop for credit losses to Fed lending. These funds will allow the central bank to lend directly to troubled industries and corporations, even those with less impressive credit ratings than the Fed typically allows. Here, too, the object is to help these employers sustain payrolls for longer than they otherwise could and avoid bankruptcy.

Even these well-targeted measures cannot ensure that the economy will avoid a recessionary push. Reports in March already see significant negatives. These will reappear in most, if not all, economic measures. Additional reports will reflect similar negative results in the following months if the quarantines and lockdowns remain in place. After the emergency lifts, the economy could suffer some lingering stains. But the monetary and fiscal measures coming out of Washington should significantly shorten any lingering recessionary effects and make any downturn shallower than it otherwise would have been.