America's Future Is with India and Israel 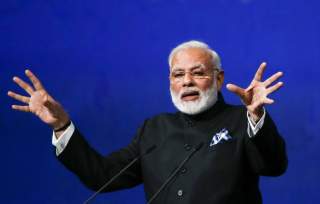 From the Indo-Pacific to the Mediterranean, a diplomatic transformation is underway. The winds of change are blowing not from Beijing, but from Delhi. President Donald Trump has an opportunity to harness some of that power to help fill the sails of America's global leadership.

The White House is expected to unveil its national security strategy some time later this year. There is no question that it will differ from George W. Bush and Barack Obama’s strategies. Bush leaned well into the headwind with a muscular strategy that tried to fix big problems. Obama tried the opposite, disengaging from global conflicts and competition. Trump looks to land somewhere in the middle—disinterested in regime change and nation building, but willing to push U.S. influence forward to safeguard vital national interests.

The main thrust of Trump’s strategy will be to reduce the potential for large-scale destabilizing conflicts in parts of the world where those interests are greatest. This will require reducing friction among big powers in Asia, Europe and the Middle East. The new strategy will also pay more attention to Central America, where pressure from transnational criminal networks and unregulated migration stress the U.S. southern border.

The new strategy will pair well with the administration’s intention of refurbishing America’s military and diplomatic instruments. Secretary of Defense Jim Mattis has taken the lead in pursuing a policy of peace through strength, rebuilding the U.S. military deteriorated badly under the last president. Meanwhile, Secretary of State Rex Tillerson is looking to shake up the department having gone soft on soft power. Tillerson is looking not just for more efficiency and effectiveness in how the statecraft gets done, but for better policies as well.

A hallmark of American forward presence under the new West Wing team will be deepening and growing the concept of shared responsibility. More than just sharing the load or outsourcing the burden, shared responsibility recognizes that there are like-minded nations interested in regional peace and prosperity and protecting a way of life that allows freedom to flourish (much in the manner Trump described in his Warsaw speech).

Hysterical criticism and Trump’s tweets aside, administration policies ought to reassure friends and allies from NATO to the Middle East, Afghanistan and Northeast Asia, that the United States will honor its ongoing obligations.

That said, there is a lot of white space to be filled in. How will this White House build momentum behind its commitments to shared responsibility? In particular, what replaces Obama’s empty pivot to Asia? How will the United States compete with Beijing’s One Belt One Road initiative?

America needs a forum to coordinate with India, Japan and Australia—key allies in Southeast Asia—on how to respond to China’s effort to rewrite the rules of the commons.

The Trump team needs new ideas on how to deepen ties with longstanding allies and move bilateral dialogues beyond mutual security and trade deficits. It’s time to start looking at truly global issues. An initiative from India offers the U.S. another opportunity to help reset the global stage in a more American-friendly manner.

Prime Minister Narendra Modi has unmoored his country from its stagnant, non-aligned foreign policies. Moreover, India is an emerging economic power. Combined, these developments leave India poised to become a net-exporter of regional security, particularly in the Indian Ocean.

Additionally, the prime minister’s historic trip to Israel this month augurs an important shift of the Modi government on Middle East policy. For decades, India has had warm relations with Iran, if for no other reason than the country was major importer of oil. India is also principal investor in the Chabahar Port project in Iran.

Delhi has not walked away from Tehran. Still, once the Iran Deal lifted many sanctions against the regime, Delhi noticeably did not race to ramp up ties. Modi’s visit to Iran last spring was restrained and very carefully orchestrated.

Even before the trip to Israel there were signs that Modi was broadening and rebalancing India’s relationships in the region, stepping-up dialogue with Gulf Cooperation Council countries as well as Israel. Previously, the government downplayed engagement with Israeli government. Now, Modi’s team was less inclined to hide the fact that they were picking up the pace of defense cooperation, economic ties and diplomatic talks with the Israelis.

India’s shift dovetails well with the view from Washington toward both South Asia and the Middle East. The Trump administration shows every sign of continuing the momentum toward a closer relationship with India. The recent meeting between Modi and Trump could not have gone better, and there is plenty of room to grow that relationship.

Trump has also clearly signaled that he wants to be a better friend to Israel than the last administration. Leaders of the two countries exuded nothing but positive vibes at the conclusion of Trump’s visit earlier this year. Additionally, it is increasingly clear that the Trump administration’s strategy to limit Iran’s destabilizing influence and crush the likes of al Qaeda and ISIS calls for the United States to align more closely with Israel and the Arab states.

Time for a Trilateral

The growing strategic convergence between Washington and Delhi suggests another initiative that could help advance the administration’s notion of shared responsibility. Few steps signal shifting strategic intentions more than multilateral dialogues. They presage evolving networks of relationships—particularly when the talks span multiple strategic regions. In that respect, a trilateral dialogue among India, the United States and Israel would draw the attention from friends and competitors alike.

U.S. participation in this dialogue would demonstrate that the White House is thinking of the long bridge that spans vital U.S. interests and protection of the commons across the expanse of the Indian Ocean. It would also reassure the other participants Washington sees them as valued global strategic partners—not just regional allies.

Here are five natural issues where high-level consultation among these like-minded nations could prove highly productive.

Getting Serious About Cyber.

Cyber will unquestionably be a cornerstone of the U.S.-India strategic relationship. There are exciting opportunities for both countries. Already a small-cyber power punching above its weight, Israel fits in nicely between the interests and capabilities of the other two countries.

Pondering One Belt One Road.

Hard thinking about the opportunities and challenges posed by China’s initiative ought to be paired with a discussion of what role the United States should play in making its economic presence felt across the expanse of the Indian Ocean. China’s biggest tool these days is the checkbook. What is Washington going to bring to the table, where and why? Learning the perspectives of nations from different parts of the commons linking East and West can help the United States develop the right answers to these questions.

From terrorist attacks to Islamist ideology, the United States, Israel and India have the same problem—stopping terrorist murderers, dangerous ideologues and building common cause with the breath of the Islamic world that rejects the violence and extremism that affects them worst of all. Few topics merit joint discussions and action more.

Situational awareness in the maritime domain is a priority for all the three countries. These are topics where sharing ideas make sense.

U.S.-Indian defense cooperation is the face of the future. F-16 production in India is one big idea on the table. There are many more. With global supply chains for major defense equipment that might well include suppliers and manufactures across multi-tiers in all three countries, discussing the possibilities together at one table might spark some innovations.

Start at the Start

A trilateral dialogue might profitably address a long list of topics, from energy to artificial intelligence. The five ideas presented above are a logical place to start. All that’s needed is the will to get a high-level dialogue going—a dialogue that can move the United States to the next level of global diplomacy.