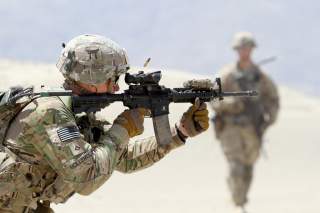 Are the Russia hawks like Senators John McCain and Lindsey Graham prepared to level with Americans and “honestly tell them that Americans should die for Kiev and Tbilisi, and not even for Kiev and Tbilisi but to provide them with the privilege to be in NATO on their schedule?” This was the pointed question that Dimitri K. Simes posed at an event at the Newseum yesterday hosted by Harvard University’s Belfer Center for Science and International Affairs. Moderated by Kevin Ryan, the panel featured Fiona Hill from the Brookings Institution, Simon Saradzhyan from the Belfer Center’s “Russia Matters Project” and the president and CEO of the Center for the National Interest, Dimitri K. Simes.

Simes’s question about Kiev and Tbilisi was meant to indicate that America often takes on commitments that it is not necessarily willing to fulfill. Is there a better path forward? Simes started off the discussion by observing that President Bill Clinton was also befuddled by the lingering question of how to improve relations with Moscow. He also expressed optimism that relations between Russia and the United States would improve, due to the fact that “Trump is a dealmaker” and “is not easily intimidated” and would not be hamstrung by stigmas in Washington for wanting to work with Russia. Simes expressed three reasons that Trump may have better luck in deals with Putin than his predecessors.

The first reason was that “democracy promotion is not going to be a priority” in his administration. He explained that this did not mean that Trump would not defend democracies around the world and encourage democratization, but that it would not focus on regime change. Second, he observed that Trump would not press humanitarian interventions. Third, he pointed to NATO expansion.

Simes mentioned that Trump focused a great deal of attention to the issue of NATO burden sharing and the mission of the organization, including the open door policy toward joining the alliance. Simes summed up that if these aspects were addressed, “the most fundamental disagreements would be removed automatically” between the two powers. Simes ended by saying that if Trump sees himself as a dealmaker he must understand the issues facing Russia and what their national interests are, as well as those that are critical to the United States. “If we have a president willing to challenge conventional wisdom, his Russia policy will have a real chance.”

Fiona Hill mentioned that skepticism is healthy and that Trump as president should see all the information about Russian interference in the U.S. election to make a level headed assessment of what happened. She stressed that while it is important to look at Russia’s national interest, we must also think if it works to America’s national interest. Hill brought up that “it is less clear what we want.” She pointed out that it is neither in America’s or Russia’s interest to continue the risk of military escalation in the relationship. She likened the approach to the relationship between Gorbachev and Reagan, in which they hoped to de-escalate international tensions. Hill said, “From a very pragmatic perspective … we need to look at this relationship and ask, where is it leading us?” The United States and Russia have and had very clear differences over what should happen in Georgia, Ukraine and especially Syria. She also stated that we need to find a way to resolve our differences, short of military conflict. Hill also mentioned that American allies, like Israel and Germany, have expressed concerns over Russian interference in politics, in the same way that she says the Kremlin is trying to influence U.S. politics. To do this, Hill thinks that Putin and Trump need to sit down; Trump should not be intimidated and figure out asking how to get out of the path to confrontation. Trump’s advantage is that he is “master of uncertainty.”

Simon Saradzhyan stressed that Russia during the Clinton years looked to the West and viewed it as a model. However, Russia is now stronger, militarily and economically than it was during the 1990s. He mentioned that Trump has the ability to improve U.S.-Russia relations, simply because they are currently “at rock bottom.” He thought that the two nations should seek to deconflict tensions in Syria and the Baltics to avoid potential confrontation. Saradzhyan did bring up the issue of NATO, and that despite Trump’s skepticism, Montenegro would likely still be admitted to the alliance under his watch. More importantly, the relationship between Washington and Moscow is precarious due to the “lack of solid economic foundation” between the two. Saradzhyan pointed out that there is no one in Congress worried about hurting trade ties with Russia, in the same way they are with China, and that Russia was not even on the top-thirty list of trade partners with the United States.

The next panel switched from focus on Russia, to the issue of Trump, China and North Korea. Moderated by the Belfer Center’s Graham T. Allison, the question was whether China and the United States were destined for war in a Thucydidean trap. Harvard’s Joseph Nye, James “Sandy” Winnefeld and Goldman Sachs’ chair of international advisors Robert Zoellick participated in the conversation. The question that Allison posed to the group was what their elevator pitch was if they only had four minutes to discuss China priorities with President-elect Trump.

Nye started the conversation by saying that managing the relationship with China is going to be “one of the most important question of [Trump’s] presidency and the century.” If the interaction goes bad, things could become very bloody as the established power becomes too fearful and overreacts. He pointed out that ISIS and Russia are important, but that China is extremely important in the long run. Nye also posited that during the 1990s, the conversation was that maybe China should be held down or contained. The problem with this is that China would immediately become an enemy. Instead, America sought to integrate China into the world economy, but to also hedge the bet and keep the Japan-U.S. alliance tight and resolute. The next point he made was that integrating China has been successful, but that Beijing has been taking advantage of the situation; the problem is how to be tough on China, but not torpedo the overall relationship. Challenging core interests, such as Beijing's belief that Taiwan is a Chinese province, the relationship could be destroyed in the long run. Be tough, but be careful on the basics established by Nixon and Kissinger.

Winnefeld’s pitch for Trump was that Thucydides stated that “all conflict arises from fear, honor and interest.” He expressed the dilemma that all three are intermixed in the U.S.-China relationship. Trump should be careful when fear, honor and interest are juxtaposed on top of each other, “which is where the real danger occurs.” The relationship can be carefully managed, one must apply pressure at the right place at the right time. Additionally, Trump should use his power wisely. If he wants to make a point about Taiwan, remember that the consequences are not like a business deal, in which the worst case is bankruptcy, but that “the consequences could go on a slippery slope that leads to disaster.” To counteract this, Winnefeld believes that Trump should consult a hierarchy of American national interests. He believes that Trump should not defend a lower interest at the risk of a more critical interest. Trump should employ nonmilitary means of national power in order to achieve goals: where will the United State be, where is it, and where America’s risk will be with China in the future? Lastly, Winnefeld mentioned that while Trump may believe Beijing has complete control over Pyongyang, it does not.

Zoellick thought that it is important in how one presents arguments to Trump, which is quite important. He focused on the American drumbeat against China and to be careful of the “groupthink that takes hold of itself.” The second point he made was on applied history. Zoellick underlined how important it was to consider how China views its own history, especially the idea of the century of humiliation, the loss of territory and foreign influence. The third point is how China sees Trump. There are stabilizers, who are worried about anything that would undermine Chinese growth. There are optimists in China, who see Trump undermining American influence through killing the TPP and his own actions, which come at the expense of Washington, to the gain of Beijing. He said that there are also pessimists, who think Trump would court Russia to counterbalance China. This school of thought is worried about Trump pulling a “reverse Kissinger” in working out something special with Russia, seeing China as the enemy and countering it with other powers. The last point is that China must be thought about in the regional and global context. One needs to think of Japan, India, Korea and all the players. Whatever policy Trump makes, he must consider how all the other nations would see it.

Nye also brought up the issue for Trump to consider, that as Russia is in decline, it is actually more dangerous to America, since it will see the world more pessimistically than China. He thought it would be dangerous to mix the roles of Russia and China and to avoid isolating or vilifying China. Zoellick also brought up the critical question: what are China’s aims? Is it to dominate the Western Pacific? The world? He believes that we need to differentiate between what a country wants and what it could actually or will actually do, and what costs the country would need to pay. If America focuses on what Beijing “dreams of,” Washington quickly moves into the danger of them “as the new enemy.” In regards to Taiwan, Allison pressed the panel on what should be done about it. Winnefeld expressed skepticism of whether the United States would defend Taiwan, saying that because Beijing sees it as so important to its national interest, that if China started hostilities, America would likely defend Taipei, but if Taiwan were to initiate hostilities by declaring independence, the United States could be more sympathetic to the Chinese and be less likely to go to war with Beijing. Zoellick mentioned the precarious history of Taiwan, especially the fact of how China lost Taiwan to Japan in wars in the mid-nineteenth century, making territorial integrity critical in the minds of Chinese leaders. He thought that the issue came down to that if Taipei declares independence, Beijing could not back down politically. It would mean war. So what is the game? Would Trump trade Taiwan? Unconventional steps are not bad; the focus needs to be how it adds to larger strategy.