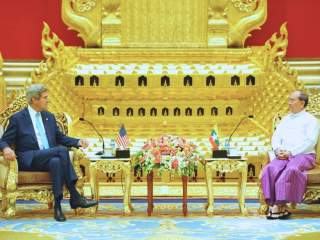 On Monday, a sea of orange-clad parliamentarians from Aung San Suu Kyi’s National League for Democracy (NLD) party swept into Myanmar’s Lower House, many taking their seats for the first time. After six decades of military rule, this was a momentous achievement for the democracy icon and a cause for much celebration around the world. Yet, Myanmar remains a long way from its transition to liberal democracy.

Just two months prior, Chaw Sandi Tun, an activist in Myanmar, was arrested and sentenced to six months in prison. Her crime? A Facebook post which observed that the color scheme of the Myanmar military’s new uniforms matched those of Suu Kyi’s traditional longyi skirt. Tun’s arrest, and those of other activists and journalists, are sobering reminders that when the NLD establishes its new government in March, Myanmar’s military, known as the Tatmadaw, will retain considerable power.

Myanmar’s democratization will ultimately require the Tatmadaw to relinquish its role in politics and “return to the barracks.” Both will be extraordinarily difficult to accomplish given the military’s decades of political entrenchment and the current constitution. In the near term, this means that the military must decide that the benefits of surrendering political control outweigh the costs of retaining the status quo. U.S. policy makers can help alter this calculation through a combination of gradual sanctions relief and other economic incentives. In the long run, however, the Tatmadaw’s permanent depoliticization—critical to any lasting democratic transition in Myanmar—requires a fundamental shift in its identity and culture. It must view itself strictly as a professional military subservient to Myanmar’s civilian leadership, a role in which launching a coup is unthinkable. On this front, there is much the United States can do to transform the Tatmadaw, beginning with the resumption of limited and targeted military-to-military relations.

Only a Partial Transition

The NLD’s performance in Myanmar’s parliamentary elections stunned the incumbent Union Solidarity and Development Party (USDP) and international observers alike. It won just shy of 80 percent of the contested seats, performing strongly in both urban and rural areas. With majority control in both houses of parliament, the NLD will be able to form the next government and select its president and one of two vice presidents. After six decades of brutal military rule, such progress is remarkable. Yet, in important ways, Myanmar’s democratic transition remains short of a “Myanmar miracle.”

The new NLD government’s reach will be constrained, largely limited to matters of economic and social policy. Under the current military-drafted constitution, the armed forces are guaranteed 25 percent of all parliamentary seats, allowing it to veto any constitutional changes, which require approval by more than three-quarters of Parliament. This means that Article 59F, which prevents Suu Kyi from becoming president because her two sons hold foreign citizenship, will almost certainly remain. On national security policy, the military will also retain near-absolute control. In addition to appointing the heads of the three key security ministries—defense, home affairs and border affairs—it will occupy five of the eleven seats on the National Defense and Security Council.

Given the opacity of the Tatmadaw and its historical repression of democracy activists, it remains unclear how the military will respond to the new government. Following the election, the military’s commander-in-chief, Senior General Min Aung Hlaing, met with Suu Kyi, and his comments since then have been ambiguous. In a subsequent Facebook post, he stated that “whichever government is in office and whichever political system is adopted, the main duty of the Tatmadaw is national defense.” Similarly, in a rare interview with the Washington Post, he remained non-committal about the possibility of cooperating with the NLD and transitioning greater authority to a civilian government.

Nonetheless, Myanmar’s current generation of military leaders may be the next best thing in comparison to reform-minded idealists: ruthless pragmatists principally concerned with national stability and institutional preservation. Their decision to transition from junta to quasi-civilian government in 2011, as well as acquiesce to November’s elections, reflects a recognition that its past practices were no longer sustainable. Decades of disastrous socialist experimentation and isolation from the West led to an uncomfortable dependence on China, and one of the most impoverished countries in Southeast Asia. By acceding to the West’s demands for representative government and greater respect for human rights, the military is betting that Western governments will respond by lifting sanctions and encouraging international donor assistance.

Such a pragmatic streak means that the right incentives could yet entice the military to further withdraw from politics. The most obvious of these are the temporary lifting of select U.S. sanctions against Myanmar, which restrict a wide variety of activities including trade, financial services and foreign assistance. The same reasoning motivated the U.S. government’s decision in December to temporarily lift certain trade-related sanctions for six months in order to give a boost to the new NLD government. Extending such sanctions relief to enable greater levels of foreign direct investment, for instance, could convince the military that the fruits of democratic transition are well worth the surrender of additional political power.

Such carrots must not be unconditional. It is far too soon to permanently remove the existing sanctions regime against Myanmar, which was first implemented following the junta’s violent suppression of democracy activists in 1988. Keeping such a legal framework in place allows the U.S. government to condition sanctions relief on demonstrated progress toward democratization and to respond quickly to any regressive, anti-democratic actions by the military.

Sanctions relief alone, however, is insufficient for fostering a democracy safe from the threat of future coups and resolving the so-called “civil-military problematique.” The complex task of professionalizing the Tatmadaw will take years to achieve, requiring a transformation of the military’s institutional identity and culture. After decades of seeing itself as the guardian of the nation, it must learn to trust Myanmar’s civilian leaders to act in the national interest, in spite of the messiness of democratic politics.

Such transformations are not impossible, as evidenced by the former dictatorships-turned-democracies throughout the world. To assist this process, the United States should reengage with the Tatmadaw in a judicious and targeted manner, a move welcomed by many of Myanmar’s neighbors. Speaking shortly after the November elections, Gen. Vincent Brooks, commander of the U.S. Army Pacific, noted that “the region really wants the United States to engage Burma and help them move forward.”

A key element of this engagement will require the United States to partially waive current legal sanctions on military assistance and restart its International Military Education and Training (IMET) program, which it canceled following the 1988 crackdown. Jointly run by the U.S. Departments of State and Defense, IMET programs provide training to foreign military officers in order to promote greater professionalization and closer defense ties with the United States. At institutions such as the Naval Postgraduate School, students learn how militaries can function effectively under civilian control as well as the importance of respecting human rights and international laws of war during military operations. Such training can pay strategic dividends in the long run.

Critics will argue that such assistance rewards an organization notorious for committing human rights abuses as part of its decades-long counterinsurgency against dozens of ethnic militias. Yet, the persistence of these violations is precisely why targeted engagement by the U.S. military through IMET is so critical. Significant changes in the Tatmadaw’s operational conduct are unlikely to come about organically without training on human rights, humanitarian assistance, and military justice. As Priscilla Clapp, a former U.S. charge d’affaires in Yangon, has argued, “We need to reach into the organization of the military and help educate people and expose them to new ideas.”

In addition to training on human rights, democratic values and civil-military relations, U.S. military engagement could also help bring about practical reforms to the Tatmadaw that could help resolve its many ethnic conflicts. Stanley Weiss, a long-time Myanmar observer, has identified several such opportunities, including incorporating ethnic minorities into the predominantly Burman military and eliminating counterproductive tactics that unintentionally lead to increased civilian conflict.

As part of this reengagement, the United States should also consider expanding its defense attaché office in its Yangon embassy, which at the moment has just a handful of staff. Unlike other Western countries, the United States never withdrew its defense attachés, so there exists a strong institutional foundation on which it can build. Military-to-military relations are an important component of building trust between the Tatmadaw and the U.S. military as well as a way to gain a better understanding of the attitudes of the Myanmar military toward political reform.

For the first time in decades, there is now a distinct possibility that Myanmar may become a stable and mature democracy. For this to succeed, however, the Tatmadaw must be willing to surrender its remaining role in politics and “return to the barracks,” an extraordinarily difficult task given the country’s history of military rule. In the near term, the military must decide that the costs of retaining the status quo outweigh the benefits of relinquishing political control. In the long run, this requires a fundamental shift in the Tatmadaw’s identity and culture, such that they view themselves strictly as a professional military subservient to Myanmar’s civilian leadership. On both fronts, there is much that U.S. policy makers can do through gradual sanctions relief and select military engagement to support Myanmar’s path to democracy.