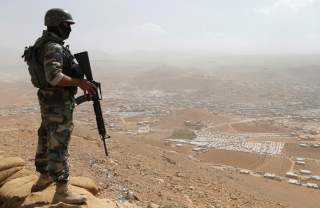 When assessing the implications of President Donald Trump’s decision to withdraw some one thousand U.S. servicemen and women from Northern Syria, history should be our guide. In the past, when great powers exited a geopolitically critical region, a strategic vacuum ensued. Trump’s hasty withdrawal of troops in Syria, just like his predecessor’s pullout from Iraq, is no exception.

The U.S.-led global architecture we live in today is a product of four generations, paid for by thousands of American lives and trillions of dollars of investment. The international framework's undeniable success has kept America safe and prosperous since 1945. This includes alliances, trade pacts, military bases, democratic values, and is supported by education, technology, business, the arts, and cultural icons. But as some of those become too costly or obsolete, readjustments may become necessary.

After emerging victorious after World War II, the United States inherited the mantle of the British Empire as the global, last resort security provider.  NATO, Bretton Woods agreements, the Marshall Plan to rebuild Germany and Japan, painstakingly developed by U.S. policymakers, helped the West to topple the Soviet Union in 1991. Those same institutions continue to keep the world safe and provide an undeniable leg up for U.S. businesses.

But this was not always the case. Great Britain, a titan of the early twentieth century was once the global power. After the two World Wars, lacking the financial resources and exhausted, Great Britain has made a strategic decision to withdraw from the Indian subcontinent, the Middle East and Africa. London let its imperial crumble. History has not looked favorably on the British for the consequences of this decision.

The hasty British departure generated a geopolitical vacuum, setting the stage for a series of conflicts that occurred from the 1940s to 1960s. These include the partition of India (and many subsequent conflicts with Pakistan), a number of wars between Israel and coalitions of Arab states, а Communist/Chinese insurrection in Malaysia, the failed Enosis (unification with Greece) in Cyprus, and a slew of nasty ethnic conflicts in Africa, from Kenya to Nigeria. Millions perished, and millions more became refugees. The USSR tried to elbow in, supporting Arab socialist regimes in Algeria, Libya, Egypt, Syria, Iraq, and South Yemen

History is replete with similar examples. After the collapse of the Ottoman, Russian, Austro-Hungarian, and German empires, a number of conflicts erupted, including the Russian Civil War, the Polish-Soviet War of 1920, the Greco-Turkish War of 1919–1922, and wars leading to the independence of the Baltic states and Finland. Again, millions were killed or became refugees.

On Sunday, October 27, President Donald Trump announced that ISIS leader Abu Bakr al-Baghdadi was killed during a daring U.S. Special Operations forces raid in Syria’s Idlib province. The operation ran against the president’s narrative that America’s counter-terror engagement in Syria is “mission accomplished,” which was used to justify the pullout of U.S. troops from the region.

The retreat of the U.S. military contingent from northern Syria carries with it major implications for the Middle East and U.S. foreign policy interests at large. The perceived abandonment of America's Kurdish allies, who spilled blood-fighting ISIS and provided critical intelligence to the Baghdadi raid, will not be forgotten by current or future U.S. partners.

Without American support, the YPG-led Syrian Defense Forces (SDF) are now doomed to be crushed by the Turkish military. They already cut a deal with Moscow to save their lives. The pullout will create a power vacuum benefitting the Syrian government and its key allies Russia and Iran. Turkey, meanwhile, has learned the lesson that it can browbeat and push Washington around.

Although Russia and Turkey were on opposite sides of the war in Syria, the two have been working closely in recent months. Turkey and Russia announced that they would carry out joint patrols of the Turkey-Syria border area, highlighting Moscow’s new role as a power broker in the Middle East. It is now Russia, with its low-cost, high-value militarily intervention in Syria since 2015, that may be seen as the region’s most reliable outside power.

Iran also stands to benefit. With the United States scaling down its presence, Tehran is boosting its naval power in the Gulf of Aden and near Bab-el-Mandeb, the entrance to the strategic Red Sea and the southern gateway to the Suez Canal. This will represent a threat to the Horn of Africa, and to shipping from the Gulf, especially of oil and gas.

But on the grand geopolitical chessboard, this strategic vacuum will reverberate beyond the Middle East. After a decades-long absence, Russia is once again preparing for a major push into Africa. This is, by extension, another show of force, and a direct challenge to U.S. involvement in the region. China, too, is making aggressive inroads on the resource-rich continent.

In September of 2018, Chinese president Xi Jinping offered to extend $60 billion in financial support to Africa as well as to write off the “debt for the continent’s poorer nations.” According to the Chinese Investment Tracker, from 2005 to 2018, China has invested $299 billion in the country. America’s recent pledge to contribute $60 billion worldwide under the auspices of The United States International Development Finance Corporation (DFC) simply is not sufficient to compete with the other power players in the region.

America is at historic crossroads: No nation should maintain a global-power posture for its glory, but pulling out troops may extract a higher price in blood and treasure than executing a strategic cost-benefit analysis and adjusting America’s global presence for the twenty-first-century interests. Let’s hope that President Trump recognizes this.

Ariel Cohen, Ph.D., is a senior fellow at the Atlantic Council’s Eurasia Center and Director, Energy, Growth and Security, at the International Tax and Investment Center. He is the author of Russian Imperialism: Development and Crisis (Greenwood Praeger 1996).