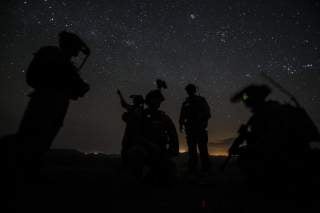 No one knows how much the U.S. military is spending on its secretive operations in Africa, a new report by the Lead Inspector General revealed.

U.S. forces have been engaged in missions to “degrade” violent extremist organizations—including the Islamic State and Al Qaeda—across East Africa and North and West Africa for years. But the public has rarely gotten a glimpse of the secretive U.S. military interventions on the continent, and the Lead Inspector General’s quarterly reports to Congress on the topic have been classified since the government watchdog began investigating these operations in 2018.

On Tuesday, the Lead Inspector General released its first-ever declassified report on U.S. counterterrorism operations in Africa. The report revealed that these operations are failing to stem the tide of terrorism—and even the government’s own investigators don’t know how much they cost.

U.S. Africa Command (USAFRICOM) forces are involved in training missions across the continent. They also accompany the Somali National Army on counterterrorism missions, strike at Islamic State forces involved in the Libyan Civil War, and “conduct engagements, exercises, and limited operations” in the Sahel and Lake Chad.

Public scrutiny towards these missions has been growing over the past month. Three Americans were killed in an attack on a Kenyan air base on January 5, and the Senate called on AFRICOM commander Gen. Stephen J. Townsend to testify on January 20.

The Department of Defense is reportedly considering drawing down the U.S. presence in Africa, although Secretary of Defense Mark Esper told reporters on January 30 that “our combatant command reviews are still ongoing and no decision has been made.”

Overall, about six thousand U.S. military personnel are deployed in Africa, Townsend told the Senate, which represents “a bargain for the American taxpayer and low-cost insurance for America in that region.”

But it’s impossible to tell how much these forces actually cost.

The Department of Defense Comptroller told the Inspector General that “that it does not have a mechanism to track expenditures for smaller counterterrorism operations.” AFRICOM reported to the watchdog agency that its operations are funded by “multiple lines of accounting, some of which are outside of the” Department of Defense.

U.S. military budgets are organized around the structure of U.S. forces rather than the locations they are deployed to, explained Defense Priorities policy director Benjamin Friedman, who speculated that “they may want it to be inconvenient for us to know those things so that they don’t get more oversight.”

“On top of that, we have undue secrecy,” he added. “We know, for example, that we have troops in Niger. Why can’t we know what that costs? I don’t think that’s giving anything away to the enemy to know what we’re spending on operations in Niger, but because it’s done by special operations forces, it’s secret.”

“It’s not any sort of smoking gun that there’s dramatic misuse of funds. It could mean that, but I don’t think it is proof that it does mean that,” said Joshua Meservey, a senior policy analyst at the Heritage Foundation. “We really should look for more opportunities to quantify what we’re doing and demand real results.”

The Lead Inspector General report, however, was not very rosy about the effectiveness of the U.S. presence in Africa.

USAFRICOM told the Inspector General that it had to withdraw forces from Libya due to an “unpredictable security environment” in April 2019 and that violent extremist organizations are “not degraded nor contained to the Sahel and Lake Chad region.”

The increase in extremism in the Sahel is a result of “the increasing capacity and sophistication and capabilities of these groups . . . coupled with obsequious, incompetent, corrupt, governance that gives the average person in this region no reason to resist or not acquiesce to these terrorist organizations,” according to Meservey.

U.S. presence in the region may be nurturing “a dependency on [foreign] arms and training, which is not sustainable, and will leave these countries in a worse situation,” added Adotei Akwei, Deputy Director for Advocacy and Government Relations for Amnesty International USA.

The Defense Intelligence Agency did tell investigators that Al Shabaab, the Somali affiliate of Al Qaeda, decreased its cross-border attacks into Kenya by 71 percent from 2018 to 2019. But the Inspector General also found that the Somali National Army “has not demonstrated the capacity to hold seized terrain without international support.”

And cross-border attacks remain a deadly threat, even if their numbers have decreased. Al Shabaab killed two American contractors and a U.S. soldier at Manda Bay Airfield in Kenya on January 5.

Amnesty International has also documented dozens of civilian casualties from U.S. airstrikes in Somalia, and a July 2019 investigation by The Intercept revealed that USAFRICOM could be intentionally concealing these casualties from the public.

The strikes have also reportedly destroyed Somali farmers’ livelihoods and allowed Al Shabaab to recruit from the local population.

“We don’t know what they’re doing in Cameroon and Niger,” Akwei told the National Interest. “Similar types of investigation and transparency would be needed in these other theaters.”

“There’s no way to verify the statements from the [U.S.] government,” he added, claiming that the U.S.-backed militaries in Africa “spend as much time cracking down on investigative journalists and groups expressing concern about their policies as they do on actual counterinsurgency efforts.”