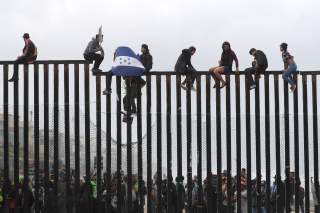 The good side of the government shutdown is that I have had time to write. In some ways I write for a living due to my work as a political and economic officer with the Department of State. After fifteen years of mainly overseas service mostly in the ‘stans and Europe, I returned home last summer to teach new officers how to do political and economic work in embassies abroad. As training is not considered an essential task, I was told to stay home, though I was assured via email that this in no way reflects on the importance of my work.

This shutdown hinges on about six billion dollars for a barrier of some sort along the U.S.-Mexico border. This barrier will ostensibly decrease illegal immigration. While there is certainly an element of power politics at play, with both sides wanting the other to “lose,” immigration, both legal and illegal, is the fundamental issue. Few politicians like to discuss immigration, especially those aspiring to the presidency. Candidate Donald Trump, however, decided to take it head on. Combined with many other factors, his willingness to discuss this issue, albeit not always with grace, contributed to his unexpected victory.

People of all political stripes agree our immigration system is broken. Having spent one year implementing U.S. immigration law as the manager of an Immigrant Visa and Diversity Visa Section at a U.S. Embassy overseas, I agree. I was often appalled by what “the law” required. I had joined the Foreign Service to serve the United States. Instead, I felt like a concierge serving the foreign national visa applicants. Early on, I was told “it’s not over till the immigrant wins,” since there were few grounds for denying immigrant visas, regardless of fraud, prior criminal activity, or weak family ties.

Immigration is a fundamental part of U.S. history. It is important. It brings new ideas and new people. Most Americans support a level of legal immigration. Many people care deeply about immigration. Immigrants certainly do. Many citizens do as well. For these reasons and others, immigration can be difficult to discuss. Immigration is also complicated, involving the economy, jobs, wages, the social contract, the environment, schools, and yes, culture. The debate is often fraught with emotion. It can also be very personal. Many people know both illegal and legal immigrants. People can simultaneously hold contradictory views on immigration; someone may oppose giving amnesty to illegal immigrants writ large, yet support a path to citizenship for an illegal alien whom they know personally.

Perhaps the greatest impediment to debate is a tendency among some to label anyone who professes the most modest concern about immigration a racist or a xenophobe. Contrary to the views of some, it is possible to question a policy from 1965 and its outcomes without being a xenophobe or a racist. I was in Germany during the refugee crisis. As people continued to come, a prominent reporter for a major German media outlet whispered to me at a reception that “we can’t find the right words to express our concerns” about migration and refugees. This was no neo-Nazi. This reporter with impeccable liberal credentials found that not even he could voice his concerns.

Germany’s history is different from the United States. However, many of the same speech codes apply here. Many of these speech codes come from the political left. As it relates to immigration, the immediate name calling from the left stifles all debate. This seems intentional. Many on the left seem to not want a debate. The left’s view of immigration reform seems to be legalization with no changes to the current system that created an estimated eleven million people living illegally in our borders. Sometimes I wonder, based on comments by some left-leaning politicians and academics, if they support the status quo simply because they believe, or hope, the current broken system will eventually give the left an edge over conservatives at the polls. This would seem to suggest that some on the left think they must import new voters to take and hold power. I do not know if this is true. But it is difficult for me to understand why anyone would want to make nearly no changes to a system that encourages illegality in our nation of laws, has resulted in eleven million illegal immigrants, and allows the overwhelming majority of American people little to no say over who may immigrate.

Since 1965, U.S. immigration law has favored reuniting families. That is, a U.S. citizen may “reunite” with his family in the United States by bringing over a spouse, parents, minor and adult children, and siblings, with the latter two being subject to annual limits. Family-based immigrants comprise two-thirds of legal immigration. Once these individuals are naturalized, they may bring over any spouses, parents, children, brothers and sisters.

There are other ways to immigrate, such as employment visas, which account for about 15 percent of legal immigrants. Another method is the Diversity Visa. This allows citizens from countries deemed underrepresented in the United States to enter a lottery for a chance to win a visa. The United States also annually grants visas to a certain number of refugees.

These are the primary ways to legally immigrate. Another method to immigrate is what I would call illegitimate immigration. People in this category often fibbed about their intentions when applying for a temporary tourist, work, or educational visa. This group makes up a sizeable, though often uncountable number of immigrants each year. This group entered the United States legally, but then violated the terms of their initial visa, either legally or illegally. Illegally might see someone never leave and work in the shadows. Legally, someone may marry, find a new job, or enroll in university. The American public and Congress generally have no say over illegitimate immigrants. They themselves decide if they want to stay; DHS has wide latitude in deciding who may adjust status or who faces deportation. Courts sometimes get involved. Once naturalized, this group may bring over other family members.

Finally, there is illegal immigration. This generally involves people surreptitiously crossing the southern or northern border, though there are other means, such as fake marriages.

This is the United States immigration system in 2019. The outcomes of this system are approximately one million legal immigrants each year and an estimated eleven million people illegally living and working in the United States, a nation founded on the notion that no one, rich or poor, is above the law. Are these the outcomes we want from our immigration policies? Do these outcomes serve the national interest? Are we choosing our immigrants according to our needs?

I would argue that we are not. Rather, blood, luck, and motivation coupled with breaking the law largely determine future U.S. immigrants. On the legal side, with the basis of the 1965 Act being family reunification, blood or family relations are the determinative factors for immigration, accounting for two thirds of all legal immigration. It seems antiquated that, in 2019, our immigration policy is largely based on blood and family relations with merit playing almost no role. In almost no other segment of society are family relations or blood an acceptable basis for decisionmaking. This policy also seems undemocratic. According to Pew, in 2015, nearly 14 percent of the U.S. population was foreign born. It would seem to follow that this 14 percent would be the most likely to have parents, spouses, children, or siblings overseas. It would also seem that this 14 percent of Americans generally determines who may immigrate since family relations cover most of our legal immigration. This would mean that 86 percent of Americans have little to no say over who may immigrate. Relatives of this 14 percent may be exactly what the United States needs. Then again, they may not be. On the illegal side, if someone is motivated and lucky enough to make it across the border, she may generally stay in America, often forever, and eventually with family.

People will always want to immigrate to the United States. Immigrants, illegal and legal, come for a variety of reasons. To find work. To make a better life. To give their children better opportunities. Some are fleeing poverty, war, crime, or danger. Others want to be a part of our great nation and love what it stands for. Others want to start over. Immigration is good for America. However, the current flawed, fifty-year-old framework is broken. It is time for a new immigration policy. Such a policy would be based on three premises: removing some of the incentives for illegal immigration, increasing security, and giving more Americans more say over future fellow citizens.