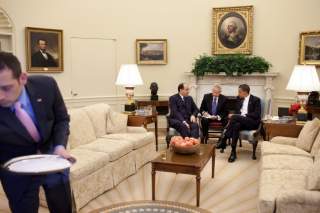 The explosive ascendance of the Islamic State in Iraq and Syria (ISIS) underscores the thoroughgoing failure of America’s political class to devise an effective and sustainable strategy for the United States after 9/11.  The failure cuts across Democratic and Republican administrations, with the most self-damaging aspects of each administration’s policies roundly endorsed by the opposing party in Congress.

America’s turn to jihadi proxies did not start with Bush’s strategic malpractice in Iraq.  It was born on July 3, 1979, when President Carter signed the first directive to arm jihadists in Afghanistan, before Soviet forces invaded the country.  For U.S. policymakers, collaborating with Riyadh to launch transnational jihad in Afghanistan seemed a clever way to undermine the Soviet Union—by goading it into a draining occupation of Afghanistan, which Carter’s national security adviser, Zbigniew Brzezinski, hoped to make Moscow’s Vietnam.  Ultimately, Red Army garrisoning of Afghanistan contributed only marginally (if at all) to the Soviet Union’s dissolution.  But U.S. support for the mujahideen and cooperation with Riyadh contributed critically to al-Qa’ida, the Taliban, and 9/11—which opened the door for Republican neoconservatives and Democratic fellow travelers to unite behind attacking Iraq.

America’s invasion-cum-occupation of Iraq was not just badly implemented, as many of its non-Republican champions self-servingly lament; it was an irredeemably bad idea from the start.  Certainly, U.S. action destroyed the Iraqi state.  But, just as fatefully, the political displacement of Iraqi Sunnis by decisively larger Shi’a and Kurdish communities attracted powerful patrons—e.g., Saudi Arabia and other Gulf Arab states—determined to help Iraqi Sunnis, including segments of Saddam’s disbanded army, fight to regain a disproportionate share of political power.  Such were the roots of the insurgency that erupted within months of the U.S. invasion in 2003—stoked by an externally-facilitated influx of non-Iraqi Sunni fighters (including a substantial number from neighboring Syria), many coalescing into the Jordanian Abu Musab az-Zarqawi’s nascent Al-Qa’ida in Iraq.

Increasingly desperate to coopt a critical mass of these fighters, Bush disregarded 9/11’s lessons and chose to gamble on arming and training 80,000 Iraqi Sunni “tribesmen” as part of General David Petraeus’ 2007-2008 “surge.”  Bush turned to Sunni proxies in the vain hope of eliciting Sunni acquiescence to a post-Saddam order inevitably dominated by Shi’a Islamist and Kurdish parties representing the overwhelming bulk of Iraqis.  Washington also wanted to check what it considered the unacceptable growth of Iranian influence in Iraq (Tehran had supported Iraq’s leading Shi’a Islamist and Kurdish parties in exile for twenty years) and regionally.  The surge temporarily paid off enough Sunni fighters to let American commanders and politicians claim that violence was coming down.  But it also gave Iraqi Sunnis greater material and organizational wherewithal with which—once U.S. forces were gone—to attack what were bound to be non-Sunni-dominated central governments.

Lieutenant General Mark Hertling, who led U.S. forces in northern Iraq during the surge, says he “never anticipated” that Sunnis his troops trained would join with—and give U.S.-provided weapons to—radical jihadis.  But at least some of Hertling’s troops recognized, in the words of a former Marine, that they were paying and training “hired thugs.”  While they may have seemed a “lesser evil at the time,” many were ostensible “ex”-jihadis and others who have since proven eager to make common cause with extremists.

U.S.-armed Sunnis needed a catalyst for resurgence, however.  In the first two years of Obama’s presidency, they grudgingly co-existed with central governments grounded in coalitions of Shi’a Islamist and Kurdish parties.  The Islamic State of Iraq—formed in 2006 from Zarqawi’s Al-Qai’da in Iraq—seemed on the wane.  Then, in spring 2011, Obama decided to support largely Sunni militias and forces willing to collaborate with them in trying to overthrow incumbent leaders in Libya and Syria.  This was motivated partly by dysfunctional aspects of Washington’s strategic co-dependency with Riyadh, and partly by a longstanding delusion that America could orchestrate a de facto axis of Saudi Arabia and other “moderate” Sunni states with Israel to check Iran’s rise and bolster a pro-U.S. regional order under threat from the Arab Awakening.  But, by reigniting the flames of Sunni militancy, the decision proved profoundly inimical to American interests.

Like Sunni militias in post-Saddam Iraq, Saudi-backed cadres fighting Muammar al-Qadhafi and Bashar al-Assad were attracting growing numbers of radicalized foreign fighters—including, in Syria, thousands of veterans of the Iraqi insurgency.  U.S. and Gulf Arab support for anti-Qadhafi and anti-Assad insurgencies gave a huge boost to participating forces, enhancing their access to arms (including caches of U.S.-provided weapons), equipment, and money.  Moreover, U.S. endorsement of these crusades effectively protected their jihadi participants; Washington was unlikely to attack militants fighting leaders whose overthrow Obama himself had enjoined.  Obama’s ill-considered interventions in Libya and Syria generated predictable blowback—e.g., a dead U.S. ambassador and three other murdered official Americans in Libya—and produced new cadres of battle-hardened militants with easy access to U.S. arms, provided either directly or indirectly through American “allies.”  This, in turn, fueled a precipitous deterioration in Iraqi security.

ISIS’s current offensive across Iraq’s Sunni heartland is an apotheosis of the trifecta that Bush’s ill-begotten Iraqi campaign and Obama’s catastrophic decisions to overthrow Qadhafi and make Assad’s removal the goal of America’s Syria policy have collectively wrought.  It integrates local and foreign jihadi extremists so bloody-minded that Ayman az-Zawahiri (Osama bin Laden’s successor) has disowned them with U.S.-trained Sunni “tribal” forces and leadership cadres from Saddam’s military (including General Izzat Ibrahim ad-Douri, the King of Clubs in the now-iconic deck of cards distributed to U.S. occupation troops).

This transnational complex represents a major upgrading of the worldwide jihadi terrorist threat.  Even more significantly, ISIS is territorially expansionist and genocidal, with a political program—including proclamation of an Islamic state “cleansed” of Shi’a and obliterating existing boundaries in the heart of the Middle East—beyond anything al-Qa’ida ever articulated.

Looking forward, American policymakers should start observing the Hippocratic injunction, “first, do no harm.”  Calls for Washington to engineer Maliki’s replacement by some allegedly preferable alternative are wrong-headed:  Maliki’s list clearly won this year’s parliamentary elections, and there is no alternative figure around whom a (mythical) new “consensus” could form.  (Question for those charging that Maliki should have been more “inclusive”:  how can any Iraqi prime minister be “inclusive” toward an insurgency with literally thousands of externally supported foreign fighters?)  America will further damage its position by returning to the business of trying to micromanage Iraqi politics.  Likewise, Washington should avoid again playing into al-Qa’ida’s “grand strategy”:  to draw “crusaders” (the West) and “infidels” (Shi’a) into battle against Sunni holy warriors, thereby rallying support for them across the Sunni world.

It is also imperative that U.S. policymakers rethink—and rebalance—their Middle East diplomatic strategy, in at least three critical respects.  First, Washington needs to acknowledge the mistaken premises of its Syria policy—that Assad has lost the support of most Syrians and can be overthrown by externally-supported oppositionists—and recognize that ending the anti-Assad insurgency is essential to cutting off ISIS’s base in northeastern Syria.

Second, Washington needs to accept Tehran as an essential player in containing and rolling back ISIS’s multifaceted challenge and—as we have been advocating inside and outside government for over a decade—embed that acceptance in a broader realignment of U.S.-Iranian relations.  It is crucial, though, that America engage Iran over ISIS politically—not, as some suggest, by U.S. warplanes covering Iranian foot soldiers in Iraq.  (Most responsible officials and politicians in Tehran appear too smart to fall for such a “trap,” which would also play into al-Qa’ida’s grand strategy.)

Third, Washington must finally confront Saudi Arabia over its longstanding support for jihadi militants as a policy tool.  Riyadh’s resort to this tool has proven serially damaging for U.S. interests; time has come for U.S. leaders to make clear to Saudi counterparts that their tolerance for it is at an end.

Flynt Leverett is professor of international affairs and law at Penn State.  Hillary Mann Leverett is senior professorial lecturer at American University’s School of International Service.  Their book, Going to Tehran:  Why America Must Accept the Islamic Republic of Iran, is now in paperback.