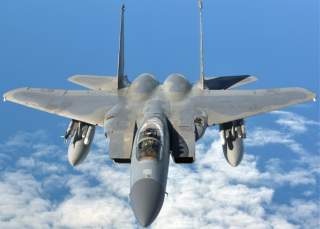 In a speech on February 18 to the Chicago Council on Global Affairs, likely presidential candidate Jeb Bush declared “the next president should launch a strategic review of our military strategy so that we meet 21st century needs with a 21st century defense capability. Then we should fund that strategy.”

We should expect virtually all of the forthcoming U.S. presidential candidates to make a similar declaration. Come January 2017 there will almost certainly be a new leadership team at the Pentagon that will want to implement its views on defense strategy.

A new start after the election will also raise hopes for a resolution to Washington’s budget war, which Bush also called for in his speech.

Bush’s call for “a 21st century defense capability” implies he doesn’t believe the United States currently has such a force. Supporting Bush’s assertion is a force structure that, in spite of dramatic changes in technology and the geostrategic situation, has been largely frozen for nearly two decades.

The 2014 Quadrennial Defense Review’s lists the “objective force,” the planned combat force for 2019. It is remarkable how similar this force is to the force structure from 2001 (found in the 2001 QDR). Active duty ground combat forces are virtually identical: ten U.S. Army combat divisions, plus three Marine Corps divisions and aircraft wings in 2001 and 2019. There are also few changes for the Navy over this long interval: one less aircraft carrier in 2019; 51 attack submarines in 2019, down from 56 in 2001; and 92 cruisers and destroyers, an increase from 81 in 2001. The most notable change for the Navy is the steep reduction in amphibious ships, from 41 in 2001 to 31 in 2019. Active duty Air Force fighter squadrons were also cut from 46 in 2001 to 26 in 2019, while combat-coded bombers were trimmed from 112 to 96.

During this 18-year span the Pentagon will increase missile defense and special operations capacity and stand up a significant number of cyber warfare units. These are important adaptations but constitute only a small fraction of the Pentagon’s total budget. Beyond these adjustments and the notable drawdown in the Air Force’s tactical fighter squadrons and the Navy’s amphibious shipping for the Marine Corps, it is remarkable how little else will change between 2019 and the post-Cold War, pre-9/11 force from eighteen years earlier.

One could scan the history of the U.S. military over the past century and struggle to find other cases of virtually matching force structures over two-decade spans. And for good reasons. New military technologies, along with rising and vanquished challengers, alter the strategic landscape, creating the need for innovation, adaptation, and a reallocation of defense resources.

The span between 2001 and 2019 will not lack for profound strategic changes. The most important challenge to the design of U.S. military forces and their long-standing operational concepts is the rapid proliferation of long range precision anti-ship and land-attack missiles and the sensors and command networks directing them.

This development, most notably exploited by China but also by other potential adversaries, is undermining the central assumptions behind the fundamental design of U.S. expeditionary forces and their plans for employment. For decades, U.S. policymakers and commanders have assumed that they would have access to bases on the periphery of Eurasia and that those bases and naval task forces would be largely free to project power at will. The curtain is falling on that era, a watershed development that has yet to register with the Pentagon’s force structure or plans.

The period has also witnessed the rapid rise of well-armed and organized non-state actors, both those with political objectives (such as al Qaeda and ISIS) and those strictly commercial yet violent transnational criminal organizations whose capacity for subversion can in many ways be even more threatening to state authority. We have learned from recent experience that U.S. conventional military forces struggle to be suitable and sustainable matchups against these aggressors.

Russia’s employment of hybrid warfare in Eastern Europe is similarly flummoxing policymakers and military planners, another example of a smart adversary exploiting the design problems and operational limitations of legacy conventional forces and concepts.

It is increasingly difficult to argue that the unchanging U.S. force structure over this two-decade period of rapid change is a smart “all-weather” portfolio of capabilities, well-suited for the challenges of both 2001 and 2019. Instead, adversary adaptations have undercut the value of significant portions of the U.S. force structure.

The unchanging force structure has resulted in expensive overstocking in many assets that potential adversaries, using tools such as irregular warfare or precision missiles, will be able to counter, reducing or negating their battlefield utility and deterrence value. Meanwhile, the quantities of other force structure elements, such as submarines, long-range airpower, special operations forces, and Marine Corps crisis response units, will fall well short of the demands made by regional commanders, especially if multiple contingencies break out. The Pentagon’s unchanging force structure is simultaneously wasteful and miserly, undercutting deterrence and increasing strategic risk.

The Office of the Secretary of Defense and the Joint Staff at the Pentagon have elaborate force structure planning processes. But in spite of this army of smart and experienced strategists, numerous institutional barriers to reform have frozen resource adaptation.

Some defense analysts have hoped that the Pentagon’s budget crunch would force creativity and innovation as it did during the two decades before World War II. That austere period saw the U.S. Army divert substantial resources from its traditional ground troops to airpower and especially strategic bombers, then a controversial concept. The Navy took funds that could have gone to the battleship “gun club” and spent it instead on aircraft carriers and aviation, submarines, and Marine Corps amphibious experimentation. When the U.S. entered World War II it had the doctrine, training, and operational concepts in place to dominate each of these recently emerging fields.

The lack of a vigorous adaptive response today was enough to cause recent Defense Secretary Chuck Hagel and his deputy Robert Work to launch the Defense Innovation Initiative, with an aim of energizing the Pentagon’s adaptive technology, wargaming, and personnel policies.

Still, we have yet to see the major adaptive reforms and resource reallocations that were more common in the past. Breaking through institutional barriers to reform will require the next president to personally attend to the problem and to work with Congressional leaders and senior Pentagon officials to achieve reform. The president will also need to find military leaders who are committed to providing the most well-adapted forces to joint force commanders, regardless of which service, platform, or concept supplies the forces and needed capabilities. Effective adaptation will require a rigorous defense strategy process that questions previously unexamined assumptions and insists on operational concepts suited for the future, not the past. Only then will policymakers truly understand the 21st century defense capability they need to acquire. The Pentagon has adapted before and can do so again.

Robert Haddick is a former U.S. Marine Corps officer and an independent contractor at U.S. Special Operations Command. He writes here in a personal capacity. He wrote “Fire on the Water: China, America, and the Future of the Pacific,” published by Naval Institute Press.