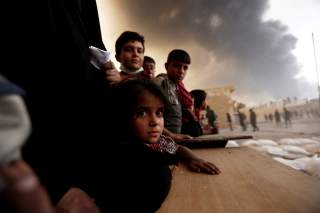 I first passed through Mosul in October 2008 in a mounted combat patrol as the leader of a U.S. military training team, my third of four combat deployments. I just returned from my third trip as a reporter to the Mosul environs to witness the carnage and human suffering left behind by the Islamic State. If there’s one thing my combat experience and journalistic investigations in the region have confirmed, it’s that a continued reliance on the military instrument to solve Iraq’s substantial political problems will almost certainly see the conflict continue.

During this visit, I was able to interview many in relief camps filled with Sunni Muslims, Shia Muslims, Christians and other religious and ethnic people who had been driven from Mosul by the Islamic State. I also traveled to Bashiqa, just outside of Mosul, to see the results of the initial battles to retake the city that began last fall. The unmistakable conclusion of all sources—unified in their outlook, regardless of religious or ethnic background—is that it is a virtual certainty the fighting will continue.

Senior U.S. officials have admitted as much, as Lt. Gen. Stephen Townsend, commander of U.S. forces in Iraq, sought to dampen expectations Americans may have about the defeat of the Islamic State in Mosul. “Make no mistake,” he cautioned, “this victory alone does not eliminate ISIS and there is still a tough fight ahead.”

The implication of this and the statements of other officials is that the American military must remain in the region to continue the fight. If the administration’s objective is the security of U.S. vital national interests, then the United States must resist the temptation to believe that the application of yet more American military power will resolve an Iraqi political situation that is not, at its core, an American security interest. As should be painfully clear by now, Iraq will not fit America’s priority criteria.

The schism between Sunnis and Shias that has been at the heart of Iraqi violence since 2003 has not been diminished by the defeat of the Islamic State. It was temporarily suppressed while dealing with the common threat that the Islamic State represented to all Iraqi citizens, but now the terrorist group has been driven from Mosul, that friction will likely resurface. Sunni angst was on display in the Baharka relief camp I visited on July 18.

Nabil Ghazi, an eighteen-year-old Sunni Muslim who looked closer to thirty, gave vent to his frustration at the government. On July 9, Prime Minister Haider al-Abadi had publicly declared Mosul liberated and held a military parade in Baghdad one week later to celebrate. Ghazi, however, was not in a celebratory mood and had questions for the Prime Minister.

“Why doesn’t he come here and see us? Who are we, are we too poor? Is that why he doesn’t come here?” In response to Abadi’s call for displaced residents to return home, Ghazi angrily asked, “How can I go back when I have no clothes but the shirt on my back, no money, and my home is completely destroyed? Where should we go? Let him come here and bring us a solution!”

Another Sunni Muslim, Hend Jasim, a local journalist from Mosul up to the time that the Islamic State came to power, said with animation that without major changes in how post–ISIS Mosul is governed, there is little hope for stability. “We have to eliminate any religious political parties from participating in the government,” she explained. Gen. Bahram Arif Yassin, commanding the Peshmerga forces that cleared many of the towns on the western approaches to Mosul, said he agreed with Jasim, but offered a pessimistic outlook for that probability.

“Certainly that’s a good idea,” he said from his headquarters in Bashiqa, “but where will these parties come from? There is no ‘talent pool’ from which to draw. Almost all the political parties are religious-based.” The Trump administration must resist the temptation to believe that now, after the Islamic State has been driven from Mosul, U.S. combat power can bring about an enduring stability.

In 2004, owing to anger at how the newly installed Shia government was running affairs in Mosul, Sunni “rebels” rose up and attacked parts of the city, but instead of confronting the fighters, there were reports “of policemen changing into civilian clothes and joining the insurgents.” In 2008, the Washington Post reported that “A year after its police force melted away and the streets descended into anarchy . . . (Mosul), a key battleground in the Iraq war, still teeters on the edge of chaos.”

And four years after that, according to USA Today, “Sunni insurgent groups have battled Kurdish militias for control over the city, Iraq's third largest . . . Hundreds of Christians, Yazeedis and members of other minority groups have been driven out Mosul in recent years as militants used violence and intimidation to tip the ethnic and religious balance into their group’s favor.”

From 2004 through ISIS’ capture of Mosul in 2014, there have been numerous iterations of violent eruptions followed by U.S.-supported government efforts to restore order. Yet in no case were the root causes of the instability resolved—namely religious and governing differences between Shia and Sunnis. Those differences remain unresolved.

Without major changes in how Baghdad chooses to govern Mosul (and indeed all the other cities liberated from ISIS), as has been the case since 2004, the end of this battle will most likely mark the beginning of the next. I saw no evidence in my travels to suggest any such fundamental changes are forthcoming. By now it should be painfully clear that American military power is excellent at destroying identified targets, but a wholly inappropriate instrument for solving political and religious problems.