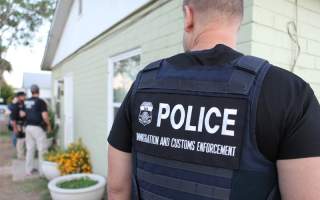 Months before the media printed the names Henry Sanchez-Milian and Jose Montano, the federal government already knew their identities. In August 2016 they were detained while crossing the border and released into the custody of their parents. Then they joined their families in Maryland where the two youths would go on to allegedly brutally rape a fourteen-year-old girl in Rockville.

During the past few presidents’ administrations, enforcing our immigration law was like the movie Groundhog Day. Federal, state or local law agents would come into contact with an illegal alien committing various crimes, slap them on the wrist, then release them into the general public—only to be horrified when months or years later they go on to kill an innocent American.

Jamiel Shaw Jr., Kate Steinle and Marilyn Pharis all had two things in common: they were all murdered by an illegal alien and law enforcement agents knew that the suspect was dangerous and in the country without papers.

The men that killed Shaw, Steinle and Pharis had all been living in America illegally for long periods of time and had lengthy arrest records. Despite the series of arrests for both petty and serious crimes, sanctuary cities protected these criminals from being turned over to Immigration and Customs Enforcement (ICE).

A January 2017 report by the Center for Immigration Studies found that three hundred sanctuary cities blocked federal agents from deporting more than seventeen thousand criminal aliens from January 1, 2014, to September 30, 2015. Of that population, 68 percent had a prior criminal history.

Sanctuary city laws, like those enacted in New York City by Mayor Bill de Blasio, not only make it vastly more difficult for ICE to deport an illegal alien, but the laws are specifically designed to protect accused criminal aliens from ending up in ICE custody.

Action against criminal aliens was even worse before the Trump administration’s more aggressive stance against illegal immigration. During the Obama administration, the federal government was even denying requests from local police because they considered a criminal alien not dangerous enough to deport, granting them de-facto amnesty.

Juan Razo, the Mexican national who killed Margaret Kostelnik, attempted to rape a fourteen-year-old girl and shot a third another woman had been arrested more than three weeks prior to his crime spree, but Immigration and Customs Enforcement declined to detain and deport him, reported Cleveland.com.

Grant Ronnebeck was another victim of an illegal immigrant who had a hefty record as a proud member of the Sinaloa drug cartel and had also been arrested for sexually assaulting a woman, a charge that was later reduced to a felony burglary charge. Luckily for Apolinar Altamirano, he came to the U.S. as a child and was protected from deportation under President Obama’s lax immigration policy, reported Arizona Central.

Now that Trump and Attorney General Jeff Sessions are in charge, the federal government has become a better partner in enforcing immigration laws, but sanctuary cities and the criminal aliens they protect are still endangering a countless number of Americans.

Yet Democratic mayors nationwide insist it is their job to protect criminal aliens from a federal government whose primary role is to protect American citizens. Under the guise of tolerance, multiculturalism and the defense of hard-working illegal aliens, many of these mayors have turned what was once a bipartisan issue—deporting criminal aliens—into a platform for the open borders lobby. In reality they have turned their own community into a nightmare for millions of innocent Americans who need sanctuary from foreign criminals.