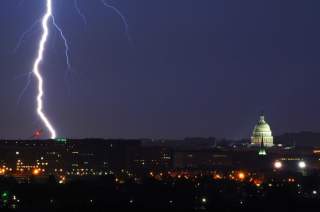 There was a great deal of selling on ABC’s “Good Morning America” on Friday. Segueing neatly from a report on raids against terrorists in Belgium, host George Stephanopoulos noted that “fears in Europe are matched by growing anxiety here about homegrown terror.” He then stoked those anxieties as he introduced a segment on an apparently current “sting operation to stop a radicalized young man planning a deadly attack on our nation’s Capitol.”

Only at the end of the “exclusive” report, and in passing, was it noted that the plot actually took place three years ago. And nowhere was it pointed out that the man had overstayed his visitor’s visa by 12 years (and therefore could have been deported at any time), that he had been evicted from his apartment in Virginia, or that FBI operatives had paid him $5,700 for living expenses and provided him with every scrap of weaponry he possessed. Also unmentioned: FBI informants had promised to pay the man’s destitute parents in Morocco up to $1,000 a month after he killed himself in the process of detonating a small (FBI-provided) bomb in a ludicrous mission to bring down the Capitol dome. The average monthly household income in Morocco is less than $600.

It is often assumed that, even without the FBI’s aid, a determined homegrown terrorist would eventually find someone else to supply him with his required weaponry. However, as Trevor Aaronson observes in his book, The Terror Factory, there has never “been a single

would-be terrorist in the United States who has become operational through a chance meeting with someone able to provide the means for a terrorist attack.” Only the police and FBI have been able to supply that service.

In his book, Risen skewers what he calls the “homeland security-industrial complex.” American leaders, he notes, “have learned that keeping the terrorist threat alive provides enormous political benefits” by allowing “incumbents to look tough,” lending them “the national attention and political glamor that comes with dealing with national security issues.” Thus “a decade of fear-mongering has brought power and wealth to those who have been the most skillful at hyping the terrorism threat” and “is central to the financial well-being of countless federal bureaucrats, contractors, subcontractors, consultant, analysis and pundits.”

In her review of Risen’s book in the New York Times, Louise Richardson lauds his criticism of “the profligacy of government agencies and the ‘over-sight free zone’ they operated” as well as of “self-appointed terrorism experts” who promote fear “while drawing lucrative consulting contracts for themselves.” She is troubled, however, that Risen “makes no mention of the press,” which she considers a key member of the terrorism industry and “at least as guilty as others in his book of stirring up public anxiety for public gain.”

We have, it appears, a case in point.

When a major political figure makes some sort of fear-inducing pronouncement or prediction about terrorism—and we’re getting a lot of that now—it tends to get top play in the media. But with rare exceptions such as Dan Gardner’s brilliant (and very funny) Future Babble, there have been almost no efforts, systematic or otherwise, to go back to people who have prominently made dire predictions about terrorism that proved to have been faulty—and, indeed, almost all of them have been—to query the exaggerators and predictors about how they managed to be so wrong. One journalist working on a daily newspaper said it was difficult to do stories that don't have a hard news component.

Fear-mongering by officials and by the media is politically (and economically) understandable, but it is also decidedly irresponsible. Especially when public safety is the concern, it is vital to get the threats right and to evaluate counterterrorism measures in a systematic and coherent manner. Money and effort spent to deal with lesser threats is money unavailable for dealing with greater ones.

The Capitol bomber was arrested before he could consummate his hare-brained, impossible scheme. Accordingly, the FBI is presumably released from its pledge to enrich his parents. In the meantime, he is scheduled to overstay his visa by another 27 years, this time at public expense. At that point he will be deported and will be able to see them once again.

John Mueller is a political scientist at Ohio State University and a senior fellow at the Cato Institute. He is the editor of the webbook, Terrorism Since 9/11: The American Cases, and, with Mark Stewart, the author of the forthcoming Chasing Ghosts: The Costly Quest to Counter Terrorists in the United States.