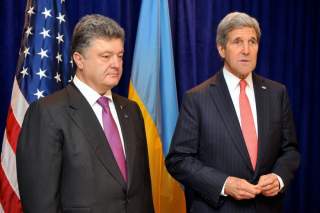 In the face of Russian opposition and the likelihood of exacerbating the burgeoning civil war in the eastern half of his country, newly elected Ukrainian President Petro Poroshenko signed the EU-Ukrainian Association Agreement in Brussels last Friday. At the signing, Poroshenko, giving the lie to the claim that the agreement is simply a free-trade agreement, noted that “…the external aggression faced by Ukraine is another strong reason for this crucial step.”

Indeed, Russia’s primary objection to the agreement from the onset of the Ukraine crisis in November 2013, was that it was far more than a simple free-trade agreement and that because it required Ukraine to adopt a large number of the EU’s acquis communautaire, the agreement was not only economically exclusionary towards Russia, the agreement’s Foreign Policy and Security Protocols amounted to a security challenge within Russia’s traditional sphere of influence. It is appropriate to note here that unlike the EU Agreement, the much derided Eurasian Union, which the Yale-historian-turned-pro-Maidan mouthpiece Timothy Snyder has likened to some sinister ideological plot hatched by Vladimir Putin and a virulent Russian nationalist by the name of Alexander Dugin, has no protocols requiring either a coordinated foreign policy, or a common passport.

American policy makers should (though, of course, they will not) take both the signing of the Agreement, as well as the gathering this weekend of thousands of pro-Western protesters on the Maidan, calling for an end to the ceasefire in the east as their cue to step aside and tell Ukraine (with which they have no cultural, historical, demographic, economic, religious, or national-security interests) and Europe (with which they have many similarities) that they can go ahead with their merger—but they’ll have to do so without our help, rhetorical or otherwise. As should be clear by now, our resolutely pro-Maidan posture has culminated in two interconnected strategic setbacks for the United States.

The first has to do with the future of the European Union. The EU is a project we Americans should welcome. The integration of the European superstate, with China on the rise and the possibility of the emergence of an unstable Russia, is in the long-term interest of the United States. An economically vital, common European space, whose half a billion people currently comprise the world’s largest market for goods and services, which has close ties to the United States is surely something we should welcome. Bringing in Ukraine (or, for that matter, any of the other five states—Georgia, Belarus, Moldova, Armenia, Azerbaijan—which make up the EU’s Eastern Partnership project), right on the heels of the Euro Crisis, portrays a Union intent on expanding at the expense of their economic dynamism and cultural cohesion.

I have no doubt that Polish Foreign Minister Radek Sikorski’s recent lament that the alliance with the United States is “worthless” is driven by his despondency that the United States is not sending greater quantities of men and materiel to further his pet project, the aforementioned Eastern Partnership. Sikorski has many admirable qualities, not least his willingness to act as the EU’s principal booster, as he did in his Blenheim Palace Speech in September 2012. But his perhaps entirely understandable Russophobia has caused him to act in ways that are contrary to the Union’s well-being, to say nothing of its longevity.

According to the Washington Post’s Michael Birnbaum, European and Ukrainian “leaders hope to follow the model of Poland and the Baltic nations, former Eastern bloc states that are now EU members and whose economies have grown significantly in the 23 years since the breakup of the Soviet Union.” Perhaps these leaders might have done well to heed AE Housman’s immortal warning that “hope lies to mortals and most believe her, but man’s deceiver was never mine,” for their hopes are utterly unrealistic.

To begin with, Poland’s rather impressive economic performance over the last several years has much more to do with the fact that they kept sovereign control over their monetary policy by keeping the Zloty than it had to do with membership in the EU. They were able to weather the financial and unemployment crises of the Great Recession, because they were able to allow their currency to depreciate, thereby supporting the country’s exporters. Second, the idea that ‘if Poland can do it, so can Ukraine’ strikes me as somewhat delusional. Is there really any reason to believe that there is an actual market for Ukrainian goods in Europe? Is the “Chocolate King” President under the illusion that Roshen will be in any sense competitive with the likes of Nestle, Unilever or Cadbury? Up until mid-2013, Russia was the market for 40 percent of Roshen’s products. Yet at a time of severe economic crisis in Ukraine, Poroshenko is basically choosing to cut off trading ties with Russia in favor of joining a bloc that has no appetite for his country’s products. That, in addition to the usually disastrous effects IMF austerity measures have on underwater economies, is a recipe for capital flight, stagnation and long-term unemployment.

Another problem the proposed Ukrainian accession poses for the EU is that it will only help to further strengthen the hand of anti-European parties like the UK Independence Party (UKIP) or Marine Le Pen’s National Front. A common market means the free movement of goods and workers, meaning Europe should expect hundreds of thousands of mainly Western Ukrainians to head for the relatively more prosperous West, which will, in turn, continue to fuel the anti-immigration backlash already taking place in France, Britain, Denmark and other countries.

The final problem as concerns the EU Association Agreement is that its underlying premise is flawed— that in the twenty-first century, economics trumps politics. This line of thinking—call it a version of the Democratic Domino Theory—posits that as Ukraine and the other former Soviet states integrate their economies into the larger European market they will adapt Europe’s political and cultural norms. This transformation will, in turn, influence Russia’s internal political development and it too (somehow) will Westernize through the power of example. This, it should go without saying, is a remarkably foolish way to see the world. Yet the longer American policy makers adhere to this premise, the more they will end up endangering the long-term viability of the EU.

The second strategic setback the United States is now faced with, courtesy of the Ukraine crisis, involves Russia. In 1978, Columbia University political scientist Robert Jervis introduced the concept of the ‘Security Dilemma’ in international relations. The theory posits that when a state undertakes measures to increase its security, those measures will inevitably be seen as offensive rather than defensive by other states, who will then take measures to increase their own security, and these measures will also be seen as offensive rather than defensive, and so on. Because of the specific foreign-policy and security protocols embedded within the EU-Ukraine Association Agreement, and because NATO membership usually follows on the heels of EU membership, the agreement will further exacerbate the “security dilemma” vis-a-vis Russia, Ukraine and NATO. And so we can expect Russia to respond in a number of ways, some of which we have already seen in its anticipation of the coming of the Agreement: Russia will align more closely with China; Russia will move to destabilize parts of eastern and southern Ukraine; Russia will increase military and defense spending; Russia will likely move to strengthen the Collective Security Treaty Organization (CSTO), Russia will likely attempt to add a political and security dimension to the Eurasian Union.

A second unintended consequence of our involvement with Ukraine is the emergence of Russian hypernationalism. Little attention seems to be given to the effects that our facilitating an anti-Russian regime in Kiev has had on the political landscape in Russia; Russians now, more so than at any other point in the last quarter century, are under the spell of one man. According to the widely respected Levada Center, Vladimir Putin’s approval ratings stand at 80 percent. While respected analysts like the Carnegie Endowment’s Lilia Shevtsova seem to believe that this level of support is unsustainable, the numbers may point to a new and troubling phenomenon: that a rather prosaic Russian nationalism is in the process of transmogrifying into Russian hypernationalism. If this is so, a war in East-Central Europe becomes all the more likely, because as the University of Chicago’s John J. Mearsheimer has noted, “hypernationalism …is the belief that other nations are not just inferior, but dangerous as well, and must be dealt with harshly, if not brutally…[it] creates powerful incentives to use violence to eliminate the threat.”

And so, President Obama’s Ukraine policy, which unfortunately seems aimed at a) intentionally provoking or diminishing Russia and b) unintentionally weakening the long-term viability of the European Union, has ultimately resulted in strengthening our main geopolitical rival’s hand—that of China. We should reverse course. Critics will no doubt cry, “We cannot abandon Ukraine!” What they miss is that Ukraine was never—and will never be—ours to win or lose. We are the keepers and guardians of our own national security and, yes, our own sphere of influence—but Ukraine never was, and never will be, a part of that.