America's War in Afghanistan Is Now About Only One Thing: Pride 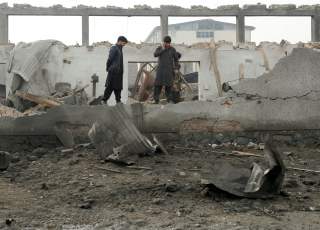 In an interview with the Washington Post on November 27, President Trump reiterated his personal skepticism of the continuing American military presence in Afghanistan. He said the only reason for this status quo policy was because “virtually every expert” told him the United States needed to keep fighting there, otherwise they will be fighting here.

This deference to the Pentagon and military experts didn’t begin with Trump, as presidential candidates since 9/11 have always defended their foreign policy prescriptions by insisting they would listen to the counsel of the military brass. Trump alarmed many Washington insiders during his campaign for his seeming willingness to reject the advice of experts on most topics, but the foreign policy establishment has been successful thus far in containing his more unconventional instincts.

Trump’s statement on the Afghanistan expert consensus, though, highlights the fatal conceit of American foreign policy and the habitual interventionist mindset of those who represent establishment thinking. America does not need to be fighting in Afghanistan, and exiting that conflict would not bring it home to the United States.

The irony of Trump supposedly deferring to “virtually every expert” on Afghanistan is that no expert consensus actually exists on maintaining the U.S. presence there. In fact, as the Cato Institute’s John Glaser tweeted, “for Afghanistan, you’d be safer saying the expert consensus goes in the other direction.” Three successive administrations have insisted Afghanistan is about protecting against terrorism, despite very little evidence that leaving would necessarily lead to more terrorism.

Moreover, terrorism is a fact of life, and no amount of military adventurism abroad is going to eliminate it entirely. As MIT’s Barry Posen, an expert of some renown himself, has written: “It is plain that we have no actual strategic policy in Afghanistan—no plausible purpose other than...to protect U.S. leaders against the possibility of future blame. America’s longest war should stop.” Furthermore, monitoring and preventing terrorist threats do not require an indefinite occupation.

Despite the abject failure of U.S. efforts in Afghanistan—building a barely functioning central state with weak security forces that has consistently lost control of territory in the last several years—the D.C. establishment insists, as Trump’s words show, that the United States needs to see this fight through to the end. But Afghanistan must be able to provide for its own security.

No one ever really stops to ask the question of whether or not the United States can make that happen. America’s unipolar foreign policy establishment is dominated by individuals (the “Blob” as made famous by former Obama advisor Ben Rhodes) who suffer from what Nobel prize-winning economist and social theorist Friedrich Hayek called the “fatal conceit.” They are the foreign policy analog to central economic planners who assume they can shape the world to America’s wishes.

As political economists Christopher Coyne and Rachel Mathers have written, these experts believe they can “design a plan that, if implemented properly, will yield an outcome preferable to the status quo” and that “success is mainly a technological matter, directly dependent on the amount of effort and resources invested...as well as on the execution of the plan.” Under this conceit, there is never a good time to leave Afghanistan—more time and money are always necessary so America can get things right. It is never asked if the United States is able to get it right in the first place.

Yet, more than seventeen years in corruption and violence are rampant. In addition, Afghan security forces and Afghan civilians are suffering record casualties, while also wondering if the U.S. intentionally sowed chaos to establish a never-ending conflict. American soldiers are also losing their lives: three were killed in a bombing in Ghazni on November 27, the worst loss of life for U.S. forces this year.

Intervention begets more intervention. Washington cannot rely on the very people who gave America the war in the first place to provide an honest appraisal of their own efforts. Foreign policy is an expert-dominated field and for a good reason. The world is incredibly complex.

But expertise can often lead to hubris. Washington’s obstinance on Afghanistan (as well as other conflicts, such as Syria) demonstrates that American foreign policy has too much of the latter.

What are U.S. Soldiers Dying for in Afghanistan?