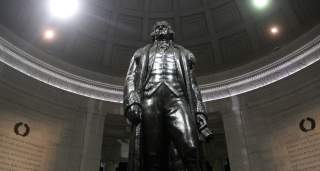 Thomas Jefferson insisted prior to his death that his gravestone contain the following inscription:

Author of the Declaration of American Independence

Of the Statute of Virginia for religious freedom

& Father of the University of Virginia

It was these accomplishments, and these only, that the Sage of Monticello “wish[ed] most to be remembered.”

Jefferson had good reason to be proud of those accomplishments, and equally good reason, beyond any sense of humility, to exclude the political offices he held during his lifetime. His omission of his role as the nation’s first secretary of state was particularly appropriate. Perhaps some flicker of conscience led him to skip that chapter in his life, for in his capacity as the nation’s chief diplomat, Jefferson repeatedly lied to his boss, George Washington, all the while organizing the opposition to the president he served.

Jefferson used his position as secretary of state to advance French interests, both covertly and overtly, whenever possible. He had a passionate attachment to France, particularly its murderous revolutionary government. His infamous “Adam and Eve” letter of 1793 defended the excesses of the French Revolution and endorsed the idea of seeing “half the earth desolated” as an incidental cost of revolution. Beyond his rhetorical support for the French, Jefferson covertly assisted the clandestine operation of French agent André Michaux, who traveled into the western reaches of the United States under the guise of a botanical expedition, but whose real intent was to organize opposition to British and Spanish outposts from Louisiana to Canada. Jefferson, violating Washington’s nonintervention policy, wrote letters of introduction for Michaux and offered tactical advice to assist Michaux in his mission.

His love affair with all things French was coupled with a hatred of all things British, particular those British banks to whom he was perpetually in debt. (Jefferson’s hatred of banks ran so deep that he once proposed that any Virginia banker who cooperated with Alexander Hamilton’s Bank of the United States be tried for treason and executed). But beyond his irritation at his financial obligations to British banks, Jefferson found Great Britain to be a morally repulsive regime; it was, in fact, an evil empire. The United States, he would later write after the War of 1812, was locked in an “eternal war” with the British that would end up with the “extermination of the one or the other party.” His contempt for the British escalated when the king’s soldiers had the audacity to burn Washington, DC to the ground during the War of 1812. Jefferson proposed that the United States covertly hire arsonists in London to burn down St. Paul’s Cathedral in retaliation.

Jefferson’s unscrupulousness knew no bounds. He placed a political operative on his State Department payroll whose primary function was to write anti-administration editorials. Jefferson provided this factotum, Philip Freneau, with information from the highest levels of the nascent American government. His minions engaged in a concerted effort to destroy Alexander Hamilton by leaking revelations of the latter’s extramarital affair, convinced, mistakenly, that they had discovered an instance of financial misconduct on the part of the treasury secretary. As justice would have it, James Callender, the Jeffersonian hatchet man who published the first account of Hamilton’s affair, would later turn on his mentor and reveal Jefferson’s alleged relationship with his slave Sally Hemings.

Jefferson questioned George Washington’s patriotism, accusing the president of surrendering to the seductive allure of the “harlot England.” Jefferson believed President Washington had committed treason in negotiating the Jay Treaty, which was “an alliance between England and the Anglomen of this country against the legislature and people of the United States.” Jefferson’s animus toward Britain was so great he that he was opposed in principle to any treaty with the evil empire. Part of his party’s opposition to the Jay Treaty was due to the absence of reparations for the slaves the British had liberated. Some Jeffersonians went so far as to demand that the freed slaves be returned to bondage.

Toward the end of his life, George Washington would have nothing to do with Thomas Jefferson, who had repeatedly lied about his efforts to undermine Washington’s presidency. Having put his life on the line during the American Revolution, Washington had little patience for armchair revolutionaries who questioned his patriotism. When Washington died, Vice President Jefferson did not attend the memorial service held in December 1799. Jefferson welcomed Washington’s death, for this allowed for a reemergence of the “republican spirit” now that the Federalists could no longer rely on Washington’s protection. Martha Washington would later observe that the two worst days of her life were the day her husband died, and the day in 1801 when President-elect Jefferson paid her a courtesy call at Mount Vernon.

Thomas Jefferson deserves many accolades, particularly for his role as the primary author of the soaring rhetoric of the Declaration of Independence. But his character was deeply flawed, and his tenure as the nation’s first secretary of state was marked by a toxic mix of deceit and zealotry, while his treatment of the president who trusted him was beyond reprehensible.

Stephen F. Knott is coauthor of Washington and Hamilton: The Alliance That Forged America and a professor at the United States Naval War College.