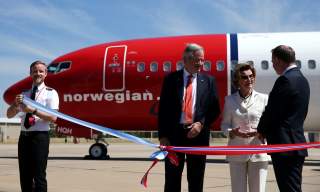 The Scandinavian peninsula is often used as a common trope by the American left as ideal models of “socialist” countries. But as the appeal of Bernie Sanders’ brand of politics maintains a steady momentum on the campaign trail stateside, the upcoming elections in Norway suggest that a new tide may be turning for laissez-faire capitalism in a part of the world arguably mistakenly seen as a socialist stronghold. These elections will likely see the first ever electoral gains by the country’s young Capitalist Party, Liberalistene. The Capitalists have candidates running in all of Norway’s eleven counties (fylker) that are up for election this cycle, as well as in thirty-nine municipalities and seven city districts across Oslo. Polling higher than traditional parties in several locations, the Capitalists are set to change the political landscape thanks to their appeal to young Norwegians.

Norway figures higher in the economic freedom index than Japan, Austria, South Korea and Israel. It draws 16 percent of its GDP from oil and gas drilled offshore in the Northern Sea, has a corporate tax of 23 percent and has rejected joining the European Union in two separate referenda held in 1972 and 1994. Despite having one of the highest per capita GDPs in the world, though, there is discontent amongst its populace and especially its youth. A similar discontent seen across Europe, which, in recent parliamentary elections, lead to gains by political parties that espouse populist anti-immigrant and nationalist ideologies.

Enter the Capitalist Party of Norway, which seems to be well aware that Norwegian oil isn’t going to last forever and that diversifying the country’s economy can only come about via increased liberalization of the labor market and greater economic freedom. Unlike other center-right parties, the Capitalists are alone in calling for cuts in public spending, getting rid of road tolls, and doing away with all taxes related to housing in what is already an expensive real estate market.

I met the party’s leader, Arnt Rune Flekstad,and its deputy leader Roald Ribe last year in Oslo, just as the party was gearing up its campaign. Their efforts have paid off: Liberastine’s social media following has grown by 20 percent over the past year, and membership in the youth wing of their party (Liberalistisk Ungdom) has grown 33 percent. Flekstad first became enchanted with free markets and individual freedoms through broadcasts of Milton Friedman’s breakthrough TV program, Free to Choose, which ironically first appeared on Norway’s state-run TV. A veteran of Norway’s armed forces and an avid hunter, Flekstad, supports economic liberalization, significant reductions Oslo’s bloated welfare spending, expanded gun ownership by civilians with no previous criminal record, freedom for parents to choose their children’s schooling and fewer restrictions on immigration into Norway.

The current ruling coalition in the Storting, Norway’s parliament, is comprised of the conservative Høyre party, the Christian Democrats and the libertarian-leaning Progress Party. While Oslo has made a show of cutting income and car taxes, Flekstad points out that it has merely raised taxes elsewhere bringing individual taxes to a thirty-five year all-time high. According to Flekstad, the current government has also embraced the new anti-immigration sentiment that is spreading in Europe—a sentiment that the Capitalists reject. When it comes to the threat of climate change, Flekstad argues that solutions should ultimately be based in innovation and technology rather than government regulation. As an example of public spending run amuck, Flekstad pointed out to me the Oslo Opera House (Operahuset), which costs taxpayers hundreds of dollars per seat per day whether it is sold out or not, sits a total of 1,364 people.

“I would point out that it is the innovation and work of Norwegian individuals that have produced tremendous wealth in Norway,” argues Flekstad. “While the government and the mixed economy have exploited this fact massively, wealth has been created in spite of government taxes and interference.” He also pointed to the fact that the largest strides in economic growth came between 1850 and 1910, when the Norwegian national budget was below 4 percent compared to more than 50 percent today.

Economic liberalization is often hard to sell during elections, especially if you are not a small business owner or are trying to get your startup off the ground then it might be hard to see how this can be an emotional issue for voters. The Capitalists of Norway though are hoping that their platform—freedom of choice, greater individual autonomy, and the potential for a more prosperous future for Norway—will set them apart and resonate with young voters. What is left to see is if an increase in social media following and growth in registered numbers actually translates into votes.