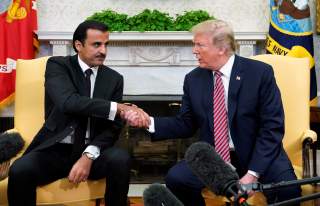 President Donald Trump, seated next to Qatari Emir Sheikh Tamim bin Hamad Al Thani at the White House on Tuesday, said their two countries are “working very well together” and “have been great friends in so many ways.”

For the emir, it was a radical improvement in standing with the U.S. president.

Just ten months ago, the president tweeted “During my recent trip to the Middle East I stated that there can no longer be funding of Radical Ideology. … Leaders pointed to Qatar — look!”

Though Syria is stealing the headlines this week, the Gulf diplomatic crisis is entering its eleventh month, and moves are being made in the corridors of powers in Washington, Doha, Dubai and Riyadh.

The two advanced “new commercial deals that would create tens of thousands of American jobs.” The emir “reiterated his commitment to counter terrorist financing and violent extremism,” she said.

Sanders noted: “As you may recall, just a few weeks ago, Qatar publicly designated 20 terrorist financiers and 6 entities. This is the latest in a series of important steps, but the President and Emir agreed that there is more progress to be made. We are committed to partnering in that effort.”

Both leaders on Tuesday condemned Syrian chemicals use by President Bashar al-Assad.

The relationship with Foggy Bottom will be one of the most watched going forward: ousted Secretary of State Rex Tillerson was among the most senior in the administration who wanted to resolve the Gulf dispute, with concessions less generous than the Saudis and the Emirates might find amenable.

“[Mike] Pompeo Pick Pleases Abu Dhabi” ran a headline in Al-Monitor last month, suggesting the CIA director could be trouble for Doha. So far, however, existing evidence is scant to suggest there will be an acrimonious relationship. Meanwhile, Pompeo is facing hiccups in his own confirmation, as the National Interest has reported.

“The Acting Secretary and the Emir discussed … the urgent need to resolve the Gulf dispute to enable the U.S. to work together with a united [Gulf Cooperation Council] to promote regional security and stability, and stand against Iran’s dangerous activities,” State spokeswoman Heather Nauert said in a statement. “On counterterrorism, the Acting Secretary commended Qatar’s recent public announcement of terrorist designations.”

State has also approved a possible $300 million weapons sale to the country. Facilitated by main contractor BAE Systems, 5,000 Advanced Precision Kill Weapon Systems II Guidance Sections, and related equipments, could be sold to the country. On Monday, the emir was greeted by Secretary of Defense James Mattis. In addition to addressing the Gulf dispute, the two discussed mutual security interests, including ensuring the annihilation ISIS, Pentagon spokeswoman Dana W. White said in a statement.

Indeed, the mood for Qatar in the nation’s capital has improved even from November, when Qatari Foreign Minister Mohammed bin Abdulrahman bin Jassim Al Thani visited Tillerson and addressed the Center for the National Interest, complaining of being “sandwiched” between Saudi Arabia and Iran geopolitically and that this was unacceptable. “We cannot have a system within the Arab world where power is consolidated in one or two countries,” he said at the Center. Meanwhile, Saudi Arabia continues to make moves against the country, however—reportedly building a canal in an attempt to cut off Qatar. "The project is to be funded entirely by Saudi and Emirati private sector investment - under full Saudi authority,” Sabq Online Newspaper said Monday. But the marked improvement in relations with the Trump administration suggest that the future bodes well for Qatar.