The Anarchy That Came 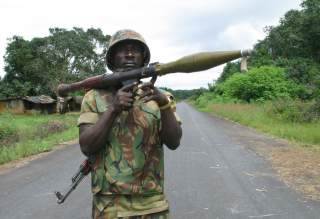 Twenty-five years ago, in the February, 1994 issue of The Atlantic, I published a decidedly unAmerican cover story: unAmerican in that it was pessimistic, deterministic, and, most importantly, declared that the victory of the United States in the recently concluded Cold War would be not so much short-lived as irrelevant, because of various natural, demographic and cultural forces underway in the world that would overwhelm America’s classically liberal vision. It eschewed the debate over ideals that have traditionally been the fare of intellectual journals and newspaper opinion pages. Moreover, because of the unrestrained optimism of the era—globalization in the 1990s was being employed as a freshly conceived buzzword—the pessimism of my essay was deeply alienating, if not abhorrent, to many. The title that the editors chose said it all: “The Coming Anarchy: How Scarcity, Crime, Overpopulation, Tribalism, and Disease Are Destroying the Social Fabric of the Planet.” They turned “The Coming Anarchy” into “the most xeroxed article of the decade,” in the words of Lester Brown, president of the Worldwatch Institute.

My aim was to expose the illusion of knowledge where none actually existed among elites. At fancy conferences and in the major media of the era people spoke breezily about how democracy would soon be overtaking the world, without knowing firsthand what the world they were talking about was really like, especially in developing countries beyond the luxury hotels, government ministries and protected residential enclaves. To counter this trend, I visited the slums of cities in West Africa and Turkey, comparing the culture of poverty in the two regions, and drawing conclusions. What I said was provocative, or at least deemed to be by complacent champions of globalization.

I claimed that in an increasingly claustrophobic world made smaller by technology and the spread of disease, the most obscure places in Africa could eventually become central to the future of the West; that Africa, rather than be placed on a protective pedestal and treated exclusively on its own terms, should be legitimately compared in vivid cultural and developmental detail to other parts of the world.

Finally, I emphasized how political and social interactions, including war, would be increasingly subject to the natural environment, which I labeled “the national-security issue” of the twenty-first century. Whereas the opinion pages of the time, both liberal and conservative, were obsessed with the clashing ideas shaping the post–Cold War world, I zoomed in on how the increasing lack of underground water and the increasing lack of nutrients in overused soils would, in indirect ways, inflame already existent ethnic, religious and tribal divides. And this factor, merged with an ever-growing number of young males in the most economically and politically fragile societies, would amplify the chances of extremism and violent conflict. Natural forces were at work that would intensify political instability: if not necessarily everywhere, then certainly in the world’s least governable parts. The most benighted parts of West Africa were a microcosm, albeit in exaggerated form, of turmoil to come around the globe.

This all ran counter to the paradigm celebrated at the time by Stanford University’s Francis Fukuyama in The End of History and the Last Man. Fukuyama suggested—in profound and riveting form—that the triumph of liberal democracy in the Cold War indicated a thematic conclusion to the story of civilization, since no other system would ever make human beings as personally fulfilled. Democracy’s triumph, while certainly not assured, was nevertheless likely to succeed. This was agreeable to global elites whose own lives fixated on personal achievement and fulfillment. But it was an extremely American- and Euro-centric vision, taking insufficient account of what was going on beyond the West. And it did not comport with what I was witnessing in Africa, the Middle East and Asia.

Critics said that my dark vision was demoralizing. But I was merely following the dictum of the late Harvard professor Samuel P. Huntington, who said that the job of a scholar or observer is not necessarily to improve the world, but to say bluntly what he or she thought was actually going on in it. To do that meant focusing on matters that would be inappropriate to raise at a polite dinner party—that would elicit an embarrassed silence among the guests. For I have always believed that the future often lies inside the silences, inside the things few want to discuss.

And I would say something further.

When it comes to making predictions, a journalist like myself cannot know the specific, short-term future: whether a country will have a coup or not within the next week. That depends on the Shakespearian dynamics between vital political actors and key intelligence that even the best spy agencies have difficulty uncovering; nor can a journalist or analyst know the situation of a country several decades hence, since so many factors, especially the advance of technology, make such a prediction mere speculation. But what a journalist or analyst can do is make the reader measurably less surprised by what happens in a given place over the middle-term future: five-years, ten-years, or fifteen-years forward, say. And that is not an original idea. Ten-year forecasts or thereabouts are the time frame utilized by many corporations in their planning exercises, as I know from my own work as a geopolitical consultant.

SO JUDGED by the standard of a middle-term future assessment, how does “The Coming Anarchy” hold up?

It begins with a detailed description of Sierra Leone and Cote d’Ivoire (the Ivory Coast) in mid-1993, with references to the general situation in West Africa during this period. This constitutes roughly the first part of my lengthy essay, and it essentially paints the bleakest of possibilities for those places, which I basically describe as countries that are so weakly governed that they are not really countries at all, but merely places with fictitious, meaningless borders on the map. Sierra Leone was in an extremely fragile political state when I visited there, and Cote d’Ivoire, though imperceptibly deteriorating, was then still seen in the West—according to the cliché—as an African success story. Articles in major world newspapers through the second half of the 1990s painted an optimistic picture for the prospects of these places as fledgling democracies. In particular, the 1996 elections in Sierra Leone drew favorable press notices, declaring that West Africa was showing the way for the future of the continent.

But my point in “The Coming Anarchy” and a related Atlantic cover story titled “Was Democracy Just a Moment?” in the December 1997 issue, was that elections by themselves didn’t matter nearly as much as the building of modern bureaucratic institutions. And West African countries had developed virtually none. That made me pessimistic. In 1999, half a decade after my essay was published, Sierra Leone had descended into utter anarchy, with drug-crazed teenagers hacking the limbs off more than a thousand civilians in the capital of Freetown alone and killing an additional several thousand, as armed groups—mobs of young men more than disciplined soldiers—terrorized the city. The number of refugees and displaced persons was well over a million, almost a quarter of the total population. (UN peacekeeping troops would be forced to remain in Sierra Leone until 2005.) During the same time-frame, a coup rocked Cote d’Ivoire, and the country descended into a period of civil war and chaotic, geographically based political fractures lasting a full decade until 2011. War in Liberia continued through 2003, and Nigeria never arrested its decline as a coherent, centrally governed state. Over the past few years, Sierra Leone and Cote d’Ivoire have gradually gained a modicum of stability, even as political violence, tribalism and crime continue to rear their heads. In 2013–2016, Sierra Leone, Liberia and Guinea experienced a major Ebola outbreak. Of course, further afield in the Middle East, the chaotic meltdowns of Iraq, Syria, Libya and Yemen following either American-led interventions or the rigors of the Arab Spring indicated that beneath the carapaces of tyranny in those places lay complete institutional voids, comparable to what I had found in West Africa.

In Turkey in mid-1993 I also found slums, but of a completely different sort. There was poverty, but no crime or social dissolution. As I wrote in another lengthy part of “The Coming Anarchy:”

Slums are litmus tests for innate cultural strengths and weaknesses. Those peoples whose cultures can harbor extensive slum life without decomposing will be, relatively speaking, the future’s winners. Those whose cultures cannot will be the future’s victims. Slums—in the sociological sense—do not exist in Turkish cities. The mortar between people and family groups is stronger here than in Africa. Resurgent Islam and Turkic cultural identity have produced a civilization with natural muscle tone. Turks, history’s perennial nomads, take disruption in stride.

My take was that Turkish geopolitical power would grow in coordination with a rising Islamic identity. At the time, Turkey had been a secular republic for sixty years already. The idea that Turkey would emerge as an Islamic power—with a religious, authoritarian firebrand in control—was not on the horizon in 1994. As I wrote then: