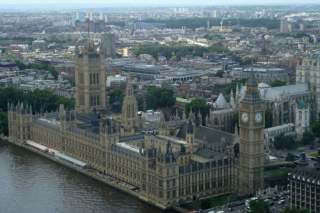 In three months, voters across the United Kingdom will head to the ballot box to choose their next government. Most commentators and pollsters seem to agree that a hung parliament will ensue—that is, an electoral aftermath whereby no single party controls an overall majority of the House of Commons.

Such was the result in 2010 (only the second hung parliament since 1929), after which election David Cameron’s Conservative Party opted to form a coalition government with the centrist Liberal Democrats. This first coalition government since World War II was a big change for Britain, portending a new—or, at least, an unpracticed—style of government and politics. Yet the post-2015 political landscape looks almost certain to be even more dramatic.

Perhaps the most extraordinary development on the UK’s political horizon is the impending collapse of the Labour Party in Scotland. For years, the once hegemonic Scottish Labour has hemorrhaged votes as a result of the Iraq War (deeply unpopular in Scotland) and the perception of having drifted to the right on social and economic issues. Since around 2007, the left-of-center and pro-independence Scottish National Party (SNP) has been making steady gains at Labour’s expense. By far the largest party in Scotland in terms of membership and also the dominant force in the devolved Scottish Parliament, the SNP are also predicted to become the largest party representing Scotland at Westminster come May, with several polls suggesting that the SNP could take as many as 55 of Scotland’s 59 parliamentary seats.

The implications of the SNP’s victory will be huge—not just for Scotland but for the rest of the United Kingdom as well. In 1918, the Irish nationalist party Sinn Féin used a similarly sweeping victory as a pretext to form a rival Irish parliament—Dáil Éireann—and declare independence from London. The SNP will do no such thing, of course, but the psychological impact should not be doubted: Scotland will have returned an overwhelming majority of MPs to Westminster committed to the breakup of the Union. None of the national, unionist parties would have parliamentary representation in the country. This is a remarkable turnaround given that the SNP and its allies lost the referendum on Scottish independence only six months ago.

In the event of a hung parliament, five dozen SNP MPs would have a significant role to play in brokering the next government. Leader Nicola Sturgeon has suggested that her party would consider propping up a minority Labour government, but has ruled out supporting a Conservative-led administration (the Tory party is still toxic in Scotland). While this boosts Labour’s chances of entering government later this year, a coalition with the SNP would be torrid news for Labour north of the border, where the SNP is the party’s main rival. How could Scottish Labour launch a counterattack against the nationalists in Scotland while forming a coalition with the SNP in London?

In the event of a hung parliament, what are the Conservatives’ chances of returning to power? With their coalition partners the Liberal Democrats facing a wipeout, the Conservatives will likely need to look elsewhere for support. Depending on the number of MPs required to push the Conservatives over the line, the UK Independence Party might just fit the bill: a paleo-conservative, Eurosceptic grouping that is looking to break into Parliament in style this year (they currently hold two seats, both Tory defectors). The Northern Irish unionist parties could also be relied upon to support a Tory government, but the price of such a coalition would be high and could upset the fragile balance in the province.

Other minor parties will have a role to play in the next parliament. The Liberal Democrats seem certain to be reduced to a rump, but even a handful of seats might be enough to allow them back into government with either Labour or the Conservatives. The Welsh nationalist party Plaid Cymru will win its usual handful of seats. The Green Party, too, has witnessed a surge in membership and could expand its tally of MPs beyond its current haul of just one: Caroline Lucas. Even Sinn Féin, which has a policy of abstaining from the UK Parliament, is reportedly considering taking its seats in Westminster as a way to influence the character of the next government. Coalitional mathematics could be messy.

Profound difficulties will face whatever government takes power in May. Constitutional questions dog the country: Scottish independence is going nowhere, and if the Conservatives win the election and/or if the UK Independence Party makes sizable gains, a referendum on EU membership will be much more likely to happen. A hung parliament might rekindle demands for electoral reform. Meanwhile, Britain’s economy is certainly not out of the danger zone and demands for a Syriza-like end to austerity are likely to lead to confrontation with whatever government takes power in May.

Britain’s two-party parliamentary system always has been argued to offer the stability and predictability to allow governments the freedom to implement bold responses to challenging times. The current era of multi-party politics and coalition governments is an assault on that supposed solidity. The country is in for some interesting times

Editor's Note: This piece has been revised since its original publication.