Angola Has an Opportunity to Lead 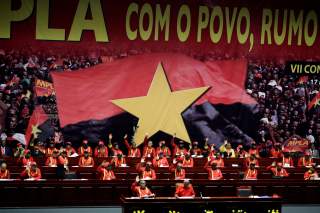 The first peaceful transition of power in Angola took place in August, with the election of João Lourenço as the new president, replacing long-serving José Eduardo dos Santos, who led the country for thirty-eight years.

International observers called the election process fair, with the ruling MPLA party taking 61 percent of the votes. In mid-September, the Constitutional Court of Angola rejected the complaint filed by three opposition parties, including the main challenger, UNITA, which came in second with 27 percent.

Political change is a necessary part of the democratic process anywhere in the world. The election of the new Angolan president is a strong sign of increasing stability in Angola, and hopefully portends the same for the rest of the continent.

This peaceful transition is quite an accomplishment for Angola. After its independence from Portugal in 1975, the nation plunged into a twenty-seven-year civil war. Peace was finally achieved in 2002, and the August election is the nation’s most recent step forward. This should be good news—not only for Angolan citizens, but also for Angolan businesses and the media, as well as foreign investors.

Lourenço had served as defense minister under dos Santos, the previous president, and will likely maintain many of the former government’s main policies. At the same time, a change in leadership often signals a natural time for transformation and, of course, challenges.

One main hurdle is the economy. With Angola’s fortunes linked to fossil fuels, the country’s 2016 GDP growth slowed to 1.1 percent due to falling crude oil prices worldwide. Lourenço’s new administration will have to work to diversify Angola’s economy away from petroleum and to encourage the creation of new jobs in other sectors.

The new president will also have to shepherd inflation-taming policies. Inflation hit its recent peak of more than 40 percent at the end of 2016, though it has since been cut in half. Finance Minister Archer Mangueira has targeted an aggressive inflation reduction to 15.8 percent.

Despite these and other social and political challenges, Angola has shown progress on several fronts.

The nation continues to upgrade its infrastructure, which is vital not just for Angolans’ daily lives, but also to attract much needed foreign investment. Under construction is a new deep-water port in the mineral-rich northern province of Cabinda. Not only does it have the potential to turn Angola into an international trade hub, but it also provides jobs for Angolans.

Angola is the largest investor in Southern Africa, with a 2016 investment outflow of $10.7 billion, up 35 percent from the previous year, according to the United Nations Conference on Trade and Development’s World Investment Report for 2017. In addition, Angola’s per capita  GDP has more than doubled since 2005.

According to the World Bank, “Angola is becoming more assertive and demonstrating steadfast commitment to peace and stability in Africa, in particular the Great Lakes region.” It added, “After Angola took over the presidency of the International Conference of the Great Lakes Region . . . the situation in the region has improved significantly, most likely a result of Angola’s leadership.”

Despite challenges, the new president has a good starting point for his term in office. To govern effectively and bring about positive change, he would need to garner broad-based support from all segments of society.

The main opposition party, UNITA, has at times been a destructive, partisan voice. It will soon elect a new leadership, and many local experts hope that the new leaders can work with the president’s ruling party for Angola’s advancement.

Angola’s new president must be able to communicate his vision to the people of Angola working with the country’s burgeoning media. But the Angolan media is a mixed bag, to say the least. It is young, lacks resources and expertise, and sometimes spreads fake news motivated by partisan political activism.

A particularly controversial example is Maka Angola. The site’s editor, Rafael Marques, was convicted of libel in 2015, and is currently facing fresh charges under Angola’s criminal code for publishing false articles. Marques and his defenders maintain these are heavy-handed attempts to silence him and deflect attention from governance flaws and corruption allegations. At the same time, as a backer of the opposition UNITA party, Marques is a political activist, a fact confirmed by a Portuguese court earlier this year when Marques brought, and lost, a libel case. “While begging to be an international journalist,” the Lisbon court ruled, Marques is “a political activist.”

Democratic governments should expect robust opposition parties and fair criticism from an independent media. At this crucial time in its history, Angola’s developing democracy, emerging from years of strife and civil war, needs a national unity consensus on the crucial next steps. It is high time for all parties to bury old grudges and contribute to the nation’s advancement.