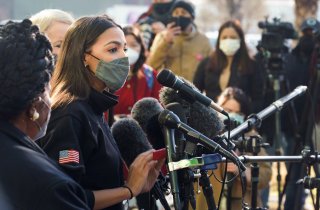 Rep. Alexandria Ocasio-Cortez (D-N.Y.) criticized fellow congressional colleagues for not supporting the progressive push of a $15 federal minimum wage amid efforts to get President Joe Biden’s coronavirus relief package passed in the Senate.

At one point, she added, “when you take the minimum wage from several decades ago and you actually account for inflation and productivity gains to today, it should really be $24 an hour.”

Although Ocasio-Cortez’s suggestion for a $24 wage is based on if the minimum wage had grown with labor productivity, economists sounded the alarm at such a wage hike.

“Since we have no experience with an increase that large in the minimum wage, it's impossible to base a prediction on empirical evidence,” Patricia M. Anderson, an economics professor at Dartmouth College, said. “However, I do not think it would help the state of the economy. The most recent Employment Situation report from the [Bureau of Labor Statistics] notes that average hourly earnings of private-sector production and nonsupervisory employees is about $25, so a minimum of $24 would mean a raise for a lot of workers. My guess is that a change this big would end up being inflationary in the shorter run and that it would accelerate firms' investments in automation in the longer run.”

Scott B. MacDonald, a chief economist at Smith’s Research & Gradings and contributor to the National Interest, also noted that a massive wage jump would “put a heavy burden” on small businesses that are already battling with the economic turmoil from the pandemic.

But as Ocasio-Cortez poses a $24 per hour wage, Senate Democrats have had a difficult time lining up behind a $15 wage, which was an early campaign promise for Biden’s candidacy and a big reason for why millions of people voted for him.

Her comments come as progressive lawmakers, including Sen. Bernie Sanders (I-Vt.), are pushing for Democrats to “ignore” the Senate parliamentarian’s decision that deemed raising the federal minimum wage from $7.25 per hour as part of the massive stimulus proposal not compliant with budget reconciliation rules, a legislative process that allows Democrats to jam through federal relief with just a simple majority. The procedure wouldn’t require a single Republican vote.

“My personal view is that the idea that we have a Senate staffer, a high-ranking staffer, deciding whether 30 million Americans get a pay raise or not is nonsensical.” Sanders told reporters on Monday. “We have got to make that decision, not a staffer who’s unelected, so my own view is that we should ignore the rulings, the decision of the parliamentarian.”

But beyond the far-Left push, the larger issue is that progressives do not have enough Democratic support to even pass the $15 minimum wage, as two moderate Senate Democrats, Joe Manchin (W.Va.) and Kyrsten Sinema (Ariz.) have both voiced opposition to the figure.

“Given the political resistance we're seeing to the idea of a phased-in $15 minimum wage, $24 would clearly be a complete non-starter in any case,” Anderson said.