Are America and China on a Collision Course? 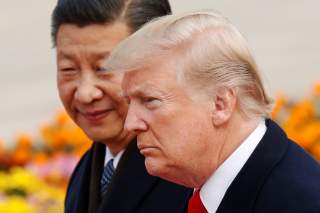 One of the most significant foreign policy shifts that President Trump has ushered in is a more confrontational approach towards China. After decades of a bipartisan consensus that closer ties with Beijing were in America’s interests, a backlash has developed in Washington to China’s rise. On Thursday, the Center for the National Interest hosted a panel discussion called “Where Does America’s Relationship with China Go from Here?” The discussion focused on the mounting disagreements between Beijing and Washington. The panelists agreed that the United States and People’s Republic of China are at a turning point.

Lieutenant Gen. Wallace “Chip” Gregson, Jr., (Ret. USMC), who is senior director of the China and the Pacific at the Center for the National Interest, moderated the session. Gregson served as the commander of U.S. Marine Forces and U.S. Marine Bases in the Pacific, as well as the commanding general of the Fleet Marine Force, Pacific, before rising to the position of Assistant Secretary of Defense, Asian and Pacific Security Affairs.

He opened it by dividing the central question of the event into two parts: Where does our China relationship go from here, and where is “here?”

The second part of the question proved contentious. Kurt Campbell, Chairman and Chief Executive Office at the Asia Group and a former Assistant Secretary of State for East Asian and Pacific Affairs, was unequivocal. He argued that the U.S. position in Asia “has been substantially eroded.” His counterpart, Michael Robert Auslin, disagreed. Auslin, the Payson J. Streat Fellow in Contemporary Asia at the Hoover Institution, depicted China, not the United States, as the primary driver of events.

In Campbell’s view, U.S. leadership has had the “worst possible preparation” for a pivot to Asia from a “fifty-year Cold War and then twenty years of hot fighting in the Middle East.” He stated that the Cold War paradigm of two opposing blocs cannot anticipate how smaller states will “maneuver” between the United States and China, and that Asian states are now worried about U.S. “unreliability.” Auslin, countered that “the more fundamental substratum of what [U.S.] policy means hasn’t changed,” pointing towards increased U.S. freedom of navigation missions and trade negotiations between the United States and Japan. He agreed with Campbell that Asian countries no longer see alliances with the United States as a bedrock but preferred the term “uncertainty” to “unreliability.” He said that U.S. policymakers should move “away from the solipsistic view we have, and back towards understanding what the Chinese view is,” which Auslin claimed is rooted in Marxist predictions of the inevitable collapse of capitalism under the weight of its own contradictions.

Gregson added that the “Soviet Union made it easy for us in the Cold War,” but that interdependence with China makes the competition less straightforward. The new competition with China “seems to call for a level of sophistication in our strategies that we’re not used to.” Quoting the Center for the National Interest’s founder, President Richard Nixon, he mentioned the “persistent American belief” that “our aim, to the extent that we can influence events, should be to induce change.”

Reshaping the relationship was the subject of a variety of questions. John Hudson of the Washington Post opened audience questions with a query about tariffs. “Everybody thinks that China plays dirty when it comes to being a hospitable business environment. Does it make sense to play dirty back?” he asked. Campbell called President Donald Trump’s tariffs on China “essentially a form of sanctions,” dismissing them as less relevant. He concurred that the President’s hard line on trade has gotten China to engage, saying that future administrations will be more likely to “play hardball.” However, Campbell said that he was worried about the extent to which U.S. trade policy was based on “narrow” statistics like the trade balance rather than broader strategic considerations.

“What I’m more concerned about is that we do not have a collective government strategy that involves all aspects of our diplomacy, our aid in dealing with the Asia-Pacific region,” Campbell said. “We have one institution of our government that is on steroids, our military. The rest of our government is on life support.” Asian countries “view us, in some respects, militarily as unpredictable. What they want is a stabilizing presence,” he said, saying that Trump’s public questioning of the value of alliances has upset the “delicate” issues allowing for the U.S. presence in the region. “It is incredibly hard for one democracy to station the forces of its military on the land of another democracy”

Auslin disagreed. He suggested that the decades after World War II and the Cold War may have been the outlier, not the norm. “The alliance structures we’ve had, whether we’re talking Europe or Asia, are historically anomalous. There’s never been seventy-five-plus years of essentially open-ended, multigenerational alliances,” Auslin countered. “In some ways, I think we were victims of our success in the Cold War . . . We really took it to heart, this idea of the End of History.”

Auslin also poured cold water on the notion that America’s alliances have been an exercise in foreign policy benevolence. “Our alliances have always been transactional,” he said, referring to American threats against Great Britain immediately after World War II during negotiations for Bretton-Woods. He also pointed to U.S. trade disputes with Japan during the 1980s. But he also suggested that alarms about the Trump administration’s readiness to tear up alliances may be exaggerated. “Two and a half years into the Trump administration, there’s more a sense of assurance that the U.S. isn’t walking away tomorrow,” he said.

Former Ambassador J. Stapleton Roy, who is currently a distinguished scholar at the Woodrow Wilson Institute’s Kissinger Institute on China and the United States, focused on a related area of concern. He pointed to the issue of American reliability. Could allies in Asia count on America? “When I arrived in Indonesia in 1996, I couldn’t find a single member of the Indonesian foreign-policy elite that did serious thinking about what would happen after [President] Suharto,” the former Ambassador to China and Assistant Secretary of State for Intelligence and Research, said. Nowadays, “the Asians, for the first time in the post–Cold War period, have to think about an unreliable United States.”

Campbell was unsparing in his analysis of American sway in East Asia. “The period in which the United States was the undisputed dominant power in Asia, that period is likely over. I’m not sure we fundamentally understand or recognize that,” Campbell warned. “The best we can hope for is that the United States has a leading position, and that our best options for good outcomes is going to be working with close partners.” “Competition will be the watchword in the Asia-Pacific region,” he said. “But competition for what? What are we competing towards?” Cautioning that both the American and Chinese militaries have “deep confidence in their abilities,” Campbell predicted that any armed confrontation “would be a disaster, and it would spread and escalate rapidly.”

Jacob Heilbrunn, editor of the National Interest, questioned the premise that the United States and China are inevitably headed towards a Cold War-type confrontation. “There were actual things that Stalin did to upend the World War II alliance,” he said. “Today, I don’t see that China has actually done all that much proportionate to its power. It’s definitely flexing its muscles, but why has the belief that we must engage in a cold war congealed into the conventional wisdom?” We’ve had this relentless search since 1989 for the new Cold War.

Auslin said that it was reflex in America, alluding to George Friedman’s 1991 book, The Coming War with Japan. But ultimately, he said, Chinese leader Xi Jinping’s worldview matter most in determining geopolitics in Asia. He concluded by pointing to a dearth of knowledge in America itself about Asia, observing that the foreign-policy elite could benefit from the organization of area studies during the Cold War. “I’m not saying that the guiding focus should be that we’re in a Cold War. There’s no question that our greatest challenge is China, but how well do we really fully understand it?” he asked. “How well are we training people? How holistic are we in our understanding to try to answer these very difficult questions? Because it’s ultimately what they do that determines in many ways what we do.”

Perhaps the most dramatic part of the session focused on whether China might deploy its troops to suppress demonstrations and unrest against its rule in Hong Kong. If a situation similar to 1956 in Hungary developed, what would America do? Auslin’s reply was succinct: “nothing.” But he did suggest that it would have deleterious consequences for China’s reputation in Asia, putting other powers on notice about its readiness to use force. Auslin suggested that just as the suppression of Hungarians in 1956 stripped away any remaining legitimacy about Soviet rule in the West, so a Chinese military action might have similar contemporary consequences for Beijing’s rule and reputation. One thing was abundantly clear from the meeting: the volatility of the region is reaching a new high-point.