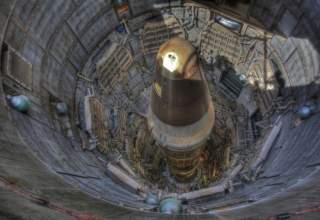 For all their speed and destructive power, the first intercontinental ballistic missiles (ICBMs) of the late 1950s and early 1960s were more terror weapons than precision munitions. The limited accuracy of the first ICBMs meant that neither U.S. nor Soviet missile forces could kill the other's missile forces or command centers.

That left American war planners in a bad bind. By 1964, ICBMs made up the bulk of the U.S. strategic force. The USSR had only a few big missiles, but they packed enough megatons to cripple the U.S. ICBM fleet. The United States could launch its missiles early to prevent their loss, but at the risk of killing half the Soviet population before American warfighters identified the Soviet missiles' targets.

If a ballistic missile's value lay in its "countervalue" targeting of civilians, then the U.S. Navy's invulnerable missile subs could assume the strategic role the USAF saw as its own. But if the Air Force had a missile big and accurate enough to threaten Soviet missile forces themselves—a "counterforce" weapon—the flying branch could cement its dominance of the strategic mission.

However, a first-strike weapon able to wipe out Soviet missile silos and command bunkers would receive the full brunt of a Soviet nuclear strike.

To be credible, a first-strike weapon had to be invulnerable, otherwise the “use-it-or-lose-it” dilemma resurfaced. So began a decades-long quest for an invulnerable basing mode that ended with the fall of the enemy it was designed to defend against.

Between 1964 and 1979, study groups and defense contractors looked at over thirty different ICBM basing concepts, ranging from the doubtfully probable to the nearly incredible. One could be forgiven for invoking Dr. Seuss: "Could they put it in a boat? Could they even make it float? Or maybe put it on a train, underground, away from rain."

The United States might launch ICBMs into orbit during a crisis, their warheads on standby as they circled the globe overhead. If things went south, they would drop towards their targets; if conditions cooled off, they could be splashed into the ocean for possible recovery. Apart from violating the 1967 Outer Space Treaty prohibiting nuclear weapons in space, such a plan would look like an attack whether or not the warheads came down.

ICBMs could be mounted in capsules attached to small diesel submarines that patrolled American coastal waters. When called upon, these capsules would bob to the surface and launch their cargoes. However, the U.S. Navy already had missile subs and the new subs wouldn't be cheap. Small subs in shallow waters were also vulnerable to nuclear explosions.

Two ideas dispensed with the subs and stuck the missiles right in the water by themselves. The “Hydra” plan envisioned floating waterproof missiles bobbing in the brine just below the surface, deployed by ships and subs either in peacetime or upon warning. An unattained missile buoy is vulnerable to everything from naval units to fishermen to sea life. And as the report states, "The Hydra concept also presents safety problems of an unprecedented kind. The idea of missiles with nuclear warheads floating unattended in ocean waters introduces an unacceptable hazard to navigation for the world's shipping."

The “Orca” concept actually proved itself during quarter-scale tests conducted by General Dynamics. A direct predecessor of DARPA's Upward Falling Payloads program, Orca envisioned encapsulated ICBMs resting dormant on the ocean floor until commanded to blow their ballast, surface and launch their contents. As with orbital basing, treaties prevent deployment of nukes on the ocean floor, and inspection would be detectable.

If floating missiles entered Navy turf, perhaps missiles could fly instead. Several basing ideas envisioned large carrier aircraft disgorging their ICBMs in flight. Launching an ICBM in mid-air sounds crazy, but it worked in tests; in fact, in the early 1960s, the USAF and Britain's Ministry of Defense collaborated on such a missile, called Skybolt. (Its cancellation left the United Kingdom without an ICBM force.)

Even giant seaplanes and zeppelins were considered for the carrier role. Seaplanes face corrosion and rough seas, and the thought of a nuclear-armed dirigible crashing in a cornfield gives one pause. Air-basing options all depended upon sufficient warning to get the aircraft airborne before combat, and it all looked very costly.

For the nuclear triad to have three independent legs, land basing was essential. ICBMs, big or small, might be buried deep or driven around to keep them safe. Missile silos in themselves would only become more vulnerable as Soviet missiles increased in accuracy. The "Sandy Silo" concept put the encapsulated missile in a 2000-foot-deep hole filled with sand. Upon launch, water fluidized the sand and the buoyant missile would shoot to the surface and fly away. That is, if the sand hadn't been turned to glass first and the water didn't boil away.

One idea was to bury the whole missile complex 3000 feet under a solid-rock mountain. The "Citadel" concept offered great survivability, and using abandoned mines could reduce the high costs involved. However, the Soviets could target the missile launch portals and seal them up.

Citadels faced three big problems: command and control, dig-out and testing. Antennas or other communications gear connecting the citadel would likely be wiped out in the first assault. Tunnel-boring machines and pre-dug tunnels could open exits for weapons and personnel but would take a long time to do so—time not available during Armageddon. One would like to know this all worked before committing time and money, so nuclear testing of a citadel would be required. Once again, treaties foreclosed that possibility.

Instead of digging up an entire mountain, perhaps it could be used as a shield. ICBMs flying from the USSR would have come from the north over the Pole; placing silos on the south faces on mesas and mountains would offer protection from the incoming warheads. But sub-launched missiles can come from any direction, and suitable south-facing sites are pretty scarce—some sit in national parks.

The wackiest concepts involved moving ICBMs around a lot. Mobile missiles are hard to target and dispersing them reduces their vulnerability to attack. Several transporter-erector-launcher (TEL) designs looked to trundle ICBMs along highways and across open terrain.

If the thought of MIRVed nuclear missiles passing you on the interstate unnerves you, consider the off-road alternative: "Studies revealed a requirement for over 400,000 square miles of operating area, which exceeds the total land area controlled by the Department of Defense and the Bureau of Land Management of the Department of Interior . . . and certainly more than the combined area of military bases in the southwestern U.S."

Those huge vehicles would scar the Western landscape something fierce. How about a hovercraft? It sounds like something a fiction writer came up with, but large hovercraft would cause less environmental damage. They would generate huge amounts of blowing dust and even minor obstacles like fences could impede movement. And like other dash-on-warning systems, hovercraft require advance notice to deploy safely.

Another idea was to have amphibious gas-turbine-powered TELs randomly hiding in giant pools of opaquely-dyed water placed across the landscape. The pools offered some blast protection as well as concealment. Just where all this water was to come from was left unexplained.

However goofy, the pool shelter concept shared its multiple-shelters-for-one-missile with other shell-game designs. Soviet satellites and spies might count the shelters, but wouldn't know which shelters held ICBMs. Noting that most of a missile's cost and complexity lies in its upper sections, one study even suggested leaving the rockets in the silos and shuttling their noses around.

If burying the missiles in shelters was good, why not bury the whole shell game? A vast tunnel network could be excavated not far below the surface and special trains carrying the missiles could then move the weapons around out of sight. When called upon, the trains would stop and the missile launchers would ram their way through the earth to the surface.

Analysts looked into a number of rail-mobile concepts besides subways. The Air Force later developed the Peacekeeper Rail Garrison just before the MX program was cancelled. The Soviets successfully deployed a few RT-23 ICBMs on their rail network, although not without difficulty.

In the end, the Air Force selected a vast plan to build thousands of shelters and miles of track across Nevada and Utah for the MX Peacekeeper missile. Its $37 billion cost and the 4000 square miles of desert needed shocked even Republican senators. Congress vetoed the "racetrack" basing and settled on sticking the fifty MXs purchased in existing Minuteman silos. Neither the MX's numbers nor survivability matched the original weapons concept, and a decade after the START II treaty was signed, the big missiles stood down.

As debate swirls around upgrading the nuclear triad, ICBMs struggle to keep their place in America's arsenal. Russian and Chinese ICBMs have become ever more accurate. Huge zany basing schemes are even less affordable now than when the MX was developed. Sub-launched missiles are accurate enough for counterforce targeting. If the USAF wants to keep its ICBM force, it must find a basing mode that works.