Are China and America Already in a Second Cold War? 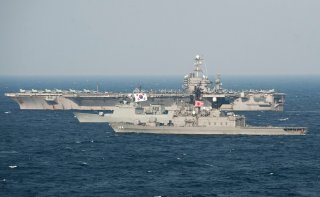 During Donald Trump’s presidency, the term “Cold War 2.0” was popularized in the context of U.S.-China rivalry, which has been spurned by China’s economic rise. By becoming the fastest growing economy around the globe, China is challenging the U.S.-led economic system and laying the foundation to become a military superpower. As the second-largest military spender after the United States with a speculated military expenditure of nearly $250 billion, China is using its military might to assert its territorial claims in the South China Sea (SCS). China is constructing artificial islands across the SCS while also establishing its first-ever foreign military base in Djibouti at the strategic chokepoint of Bab el-Mandeb. These actions are influencing U.S. perceptions that China’s rise is a threat and, hence, a new global competition between the United States and China for hegemonic status has begun.

Parallels Between Past and Present

The Cold War 2.0 shares similarities with the original Cold War (1945-1991) in many aspects. First, during the Cold War, the United States and Union of Soviet Socialist Republics (USSR) were the prime contenders for superpower status, however, the threat of an active military conflict between the two was largely defused due to the nuclear deterrence. Hence, this allowed both the United States and USSR to collaborate on major global challenges, like resolving the 1956 Suez Canal Crisis. Although nuclear deterrence is still viable today, the context of the U.S.-China rivalry is far more beholden to economic interdependence—trade relations amounted to $660 billion in 2018—whereas U.S. trade with the USSR remained low throughout the Cold War. Nevertheless, the ongoing U.S.-China “trade war” has somewhat reduced their mutual dependency, providing space for more divergent foreign policy behavior. China has also sought to exclude the United States from its ambitious Belt and Road Initiative which is aimed at enhancing its economic presence through the multi-channel yet interconnected global framework.

Secondly, the pivot of Cold War rivalry between the United States and USSR was centered across Europe in its western and eastern parts, respectively. To prevent the expansion of USSR, the United States deployed military assets to Europe and formed the North Atlantic Treaty Organization (NATO) military alliance. In Cold War 2.0, the epicenter of U.S.-China rivalry is Asia. The United States has formed new networks of aligned states to “encircle” China—including the Quad (consisting of the United States, Japan, India, and Australia) and AUKUS (the United States, United Kingdom, and Australia)—and routinely deploys the U.S. Navy into contested sea lanes to deter Chinese military adventurism. Moreover, the United States also shares strategic partnerships with South Korea and Japan and has troops positioned on their territories. This positioning of troops reflects the idea of “extended deterrence” which revolves around bringing the aligned states into the U.S. “security umbrella” to deter hostile states like China.

Thirdly, the Cold War was largely dominated by proxy warfare around the globe. Instead of actively engaging in direct military conflict, the United States and USSR financed and armed the oppositional groups on foreign territories—culminating in three major proxy conflicts: the Korean War (1950-1953), Vietnam War (1955-1975), and Afghanistan War (1979-1990). Although no such proxy conflict is present between the United States and China to date, both countries are supporting rival factions abroad, either militarily or diplomatically. China opposes U.S. policies in the states like Syria and Iraq, opposing regime change in the former and seeing the U.S. presence in the latter as the main source of instability and provocation. On the other hand, the United States has a history of arming militant groups to pursue its foreign policy agenda, whether in Afghanistan during the 1980s or in the current Syria conflict. More recently, the United States has also removed the “East Turkestan Islamic Movement” from its list of designated foreign terrorist organizations, a move that China views with suspicion. Hence, despite the non-existence of any active proxy conflict between the United States and China, their foreign policies are bringing them closer to proxy combat.

Despite sharing similarities with the first Cold War, the practicability of Cold War 2.0 is questionable. First, the Cold War rivalry was based on ideological differences. The spread of communism in the decolonized states was seen as a threat to the Western liberal order’s capitalist nature. Similarly, Western capitalism was largely perceived by the other bloc as a part of an imperialist agenda to consolidate authority over the global structure. The respective ideologies entailed emotions and fears, hence, leading towards the formation of guerrilla forces and bloc alignment. For example, the guerilla movements of Fidel Castro in Cuba and Mao Zedong in China were highly influenced by Soviet communist ideals, which established a “Communist Camp.” In a similar fashion, the fear of communism along with perceptions of censorship, usurping the rights of freedom, and economic malfunctioning formed a hostile “Capitalist Camp” under the U.S. leadership. This was the beginning of bipolarity and a new balance of power.

However, in contemporary proceedings, ideological differences are less present between the United States and China. China has opened up to the outside world and has greatly benefitted from capitalism. In economic terms, China has now restructured its economy in public-private partnership and neither upholds the tenets of communism nor echoes its support to communist factions in its foreign policy outlook. The United States also considers China as more of a geopolitical competitor than ideological threat. This non-ideological competition has prevented the first Cold War’s arrangement of starkly evident bloc formation. Complementing it is that China does not claim to be the leader of any bloc, nor does it have the cultural outreach to inspire other states to join it. Likewise, the likelihood of bloc formation is also lessened due to post-Cold War priorities. The global focus has shifted from military alliance to economic interdependency. This has allowed China to establish economic ties with other states. Hence, smaller states, although inspired by Western liberalism, see China as more of an economic opportunity than a threat to their security.

Secondly, unlike USSR, China is neither willing nor capable of confronting the United States in an armed conflict, either actively or passively. China is challenging U.S. dominance over the international economic structure but doesn’t possess any danger to the United States’ various security partnerships. Correspondingly, China is the largest consumer of energy—mainly from the Middle East—and the swift transportation of oil and gas to China is so far ensured due to the presence of the U.S. naval fleet which is perceived as the security guarantor by the regional states. Similarly, despite being the second-largest military spender in the world, China still lags behind the United States and Russia in weapons sophistication. This has narrowed down the scope of Chinese security partnerships with the middle or weak states in an effort to expand its clout. In contrast, China is dependent upon certain states in extending its economic ties with multiple regions. For example, in Eastern Europe, China has been developing economic partnerships due to its ties with Russia since the former has historical influence in the region. Similarly in the Middle East, China is getting its oil contracts in Iraq and reconstruction projects in Syria owing to its closer collaboration with Russia and Iran. Although China has been foreseeing the establishment of an informal alliance in the form of the Shanghai Cooperation Organization (SCO), it has done little to translate its objectives into reality; the SCO is not a vital regional organization as that of the Association of Southeastern Asian Nations or European Union.

The aforementioned discussion evaluates the ambiguities in the concept of Cold War 2.0. It is evident that the feasibility of a second cold war in the wake of U.S.-China rivalry is minimal. Instead, the more appropriate definition of Cold War 2.0 would be the formation of an anti-U.S. nexus in different spheres. For example, China is challenging U.S. economic dominance while Russia’s formidable nuclear and conventional military might pose problems for U.S. military power. However, Russia’s economy is facing challenges due to its semi-developed industrial base, leaving the country reliant upon energy and arms exports. In this way, there is a clear division of labor between Russia and China in competing with the United States.

Conclusively, a potential Cold War 2.0 differs from the original Cold War in that bloc politics have been replaced by nexus politics where middle powers are seeking equidistance from the competing great powers. For example, despite being part of the Quad, Indian bilateral trade with China surpassed $100 billion in 2021. Likewise, the EU’s strategic relations with the United States didn’t prevent it from engaging China, as mentioned in its September 2021 Indo-Pacific policy paper. Secondly, wherein Sino-U.S. competition has clearly manifested in the South China Sea, the Russian role in confronting the United States cannot be overlooked, especially in the context of the Ukraine Crisis. Kazakhstan’s unrest in 2022 and the Russian military response to it is another reflection of how the Russo-U.S. rivalry is still at play in various domains. Hence, Cold War 2.0 must be analyzed in a multipolar framework instead of through a focus on any one state. The United States faces challenges at multiple fronts which are united in counterbalancing U.S. supremacy in international politics.