Are Democrats Done with White Men? 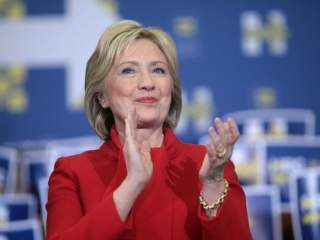 Marietta, a city of 14,000 located on a bend in the Ohio River, was known throughout the twentieth century for its blown glassware. A site of hot air and distortion, then, it seems well suited for a campaign speech in this still gooey 2016 presidential election. But Ohio Governor John Kasich’s State of the State there on Wednesday night was not the stump speech many were expecting. Kasich instead focused on policy details, only occasionally inflecting his hour-long talk with mention of his struggling presidential campaign. His quip, “As you know, I’ve been doing a bit of traveling in recent months. . . ,” fell flat, according to the Columbus Dispatch.

It wasn’t this hard for Kasich before. In his last election, in 2014, it was revealed that his rival had been driving for years without a proper driver’s license—a revelation that came to light when he was discovered at 4am in an otherwise deserted parking lot with a female companion. Kasich drove away with the win, taking more than 63 percent of the vote. In 2016, however, Kasich has struggled to find traction after winning his home state on March 15—and nothing since. On Wednesday, National Review’s Jonah Goldberg neatly summed up the sentiments of both the GOP establishment and movement conservatives by asking, “Why Won’t John Kasich Go Away?”

The Ohio governor’s path to the presidency erodes hourly, and his obstinacy in staying reveals a key personality trait: Kasich is his own man. He is the darling of no one faction. He was always a compromise candidate and, therefore, one compromised. A win by him will not be the “Ohio surprise” of 2016.

But neither will the GOP National Convention in Cleveland in July be much of a surprise. Republicans will nominate their current front-runner Donald Trump or possibly his understudy, Texas Senator Ted Cruz. Little else looks plausible. And no matter which Republican emerges with the nomination, the campaign strategy to get him to the White House has already hardened: focus on the white male vote and build on Romney’s haul of 62 percent of this group. Seven-in-ten white men seems to be the magic number this year.

Democrats, meanwhile, have a much bigger decision to make than Republicans: whether or not to jettison white males entirely from their campaign strategy.

And this was from a supporter, someone who voted for her in the primary in 2008 and again this year.

How might Clinton, if she is the nominee, respond? One option is simply to forget them. “Hillary Clinton doesn’t need white men,” Paul Waldman wrote recently in the Washington Post. “Most of them are going to vote against her anyway, and even if they do, she still would have a decent chance of winning the election.”

If, however, Clinton and her pollsters decide that this group is too important to ignore, then Ohio Senator Sherrod Brown might be too appealing of a running mate to ignore. This—not Kasich, not Cleveland—might turn out to be Ohio’s surprise this election season.

Brown would fit with where the Democrats are in 2016. He is a far left, populist pol in a campaign that has seen Clinton tacking hard to port since the start. And Clinton seems to have taken notice. Her denunciation of the Trans-Pacific Partnership, for example, on the specific points of currency manipulation, pharmaceuticals and uncertainty seems cribbed from Brown’s statement on the issue.

The Ohio senator is not without obstacles. Being from a place not on the Acela Northeast Corridor, Brown is almost entirely unknown to left-leaning media based in Washington and New York. Companies such as Vox are much more enamored of Boston-based Senator Elizabeth Warren, for example (here, here, here, here, here, here).

More to the point, selecting Brown, a white male, might be anathema to elements of the left. If the new Democratic base composed overwhelmingly of minorities and women propels Clinton to the nomination, many among their number might see such an appeal to white male “Reagan Democrats” with “Rust Belt” Brown on the ticket as a reversion to her now-reviled New Democrat, centrist past—or worse, as a betrayal of the centrality of identity politics on the left going forward. White male Reagan Democrats, meanwhile, might dismiss the move as a sop.

This is the Great Uncertainty for Democrats in 2016—how fragile is this newly forming base? How quickly will enthusiasm cool? How easily will support shatter into opposing, protesting factions with edges pointed inward at the candidate? If the answers are “very fragile,” “very quickly” and “very easily,” then the GOP plan to corner seven-in-ten white males—daunting on the face of it—may end up to be comparatively a much less ambitious and much more achievable strategy than that of the Democrats.

For as much as Democrats might wish to ignore the state—Columbus was cut as the site of the Democratic National Convention in favor of a location on the Acela Northeast Corridor, closer to Clinton HQ in Brooklyn—the 2016 endgame nonetheless will come down to what happens in Ohio.