Are the Democrats Handing 2020 to Trump? 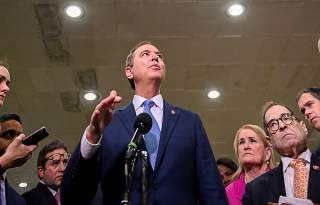 The first week of Donald Trump’s impeachment trial contained hours of melodrama, carrying long into the night as some senators fell asleep at their desks. As the C-SPAN cameras rolled, the protagonist was House Intelligence Committee Chair Adam Schiff (D-CA), who has led the Democrat’s impeachment exercise since it began in September.

Schiff is one of the seven House members selected as an impeachment manager. Making Schiff the face of the prosecution brings continuity to Democratic efforts to stymie any of Trump’s policy efforts which started before he even took the oval office.

Schiff was one of the most high-profile congressmen to give his full confidence to the Steele dossier, a collection of paid-for opposition research alleging an international, interconnected conspiracy between the Trump presidential campaign and Kremlin leadership. After more than two years of peddling this narrative, Schiff and his cohorts had to dismiss the dossier from their talking points on CNN after it had been thoroughly discredited as a bundle of falsities and misrepresentations.

But why should the exposure of the dossier as bunk even matter, when Schiff himself claimed to have seen “more than circumstantial evidence” that a Trump-Putin conspiracy existed? Schiff, as Chair of the Intelligence Committee, intimated he was privy to incriminating information that the public was not permitted to hear. All to be revealed by special counsel Robert Mueller. But when the report was released to the public in April 2019 and contained no accusations of collusion, talk of Schiff’s secret evidence went by the wayside.

No matter. This is the legislator House Speaker Nancy Pelosi tapped to prosecute the case against Trump. Referring to Trump’s hold on military aid to Ukraine, Schiff said in his opening statement, “In this way, the president used official state powers available only to him and unavailable to any political opponent to advantage himself in a democratic election. His scheme was undertaken for a simple but corrupt reason, to help him win reelection in 2020.”

But was it? This was the principal talking point of the national security bureaucrats brought before Schiff’s committee in the fall. They implicitly contended that policy must rest in the hands of an unelected, managerial elite based in Washington DC. It was this elite that oversaw the worsening of U.S.-Russian relations through both Republican and Democratic administrations for the past two decades. Trump’s belief that deescalating tensions with Russia is necessary for U.S. security represented, from the outset, a fundamental threat to this foreign policy consensus.

While Ukraine takes a superficial front seat, the impeachment drive has always been about Russia. “The United States aids Ukraine and her people so that we can fight Russia over there and we don’t have to fight Russia here,” said Schiff, quoting former NSC advisor and congressional witness Tim Morrison.

Is the United States at war with Russia? When was it decided that the border disputes of Eastern Europe constituted a major interest of the United States’? Most importantly, who decided that? Trump’s threat to overturn the unelected order staffed by Morrison and defended by Schiff has been the cause of his greatest headaches.

Schiff’s colleagues in the impeachment saga were only slightly less jaundiced. Rep. Hakeem Jeffries (D-NY), Chair of the House Democratic Caucus and the future of the party leadership, only made headlines when he referenced a lyric by the late rapper The Notorious B.I.G. Rep. Jerrold Nadler (D-NY), Chair of the House Judiciary Committee, called the Republican’s rejection of a premature witness vote “treasonous,” and “a vote against the United States.” The Republican majority has been unanimous that it will only vote to hear witnesses after both sides have presented all evidence collected by the House.

“This is the most brilliant legal presentation I have heard. None comes close. The tone, the facts, the anticipated defenses. I am in awe,” tweeted Washington Post columnist Jennifer Rubin. Rubin seems to have been convinced of Trump’s guilt for something since his June 2015 campaign announcement. But has there been any shift in voters’ sentiments? Opinion polls have been split down partisan lines since the impeachment inquiry was announced. This makes the gamble to remove the president even more essential for Democrats. “The president’s misconduct cannot be decided at the ballot box, for we cannot be assured that the vote will be fairly won,” said Schiff, sowing doubt about the November election. The possibility of Trump winning reelection is the real offense they’re trying to stop.