Are the Democrats Ready for Tulsi Gabbard? 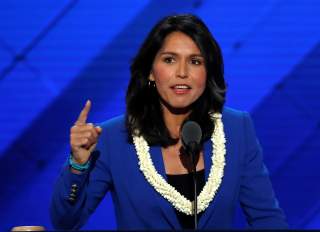 "Lead with Love," reads her campaign slogan. And Tulsi Gabbard means it.

"Aloha is more than just hello and goodbye, Aloha really means that we recognize each other as brothers and sisters. And that when we say Aloha to one another, we’re saying that I’m coming to you with an open heart and with love and compassion and care and respect," she told CNN’s Van Jones on Friday when she joined the ever-growing list of 2020 Democratic candidates for president.

Tulsi Gabbard, Congresswoman from Hawaii since 2013, is a unique candidate for president. If elected, she’d be the youngest president in U.S. history at only thirty-nine years old. But Gabbard is no stranger to youthful accomplishments; at the age of twenty-one, she was elected to the Hawaii state legislature, the youngest woman ever elected to a state house.

She served one term in office before deploying with the Hawaii Army National Guard. She has served two overseas tours, one in Iraq and one in Kuwait, and currently holds the rank of Major.

Since entering Congress, Gabbard has built a solid record of progressive credentials. She favors a $15 minimum wage, a "Medicare for All" single-payer healthcare system, the legalization of marijuana, and has been a lifelong advocate of environmentalism. In 2016, she resigned as Vice Chair of the Democratic National Committee to endorse Bernie Sanders for president.

Being a unique candidate necessarily brings along odd touches. A practicing Hindu, her irregular spiritual journey and associations with "spiritual master" Chris Butler, will raise a lot of eyebrows in Middle America. And her transformation on social issues, previously being both pro-life and opposed to "homosexual extremists," has already raised voices among progressive activists not entirely convinced by her 2012 conversion.

But where Tulsi Gabbard’s presidential candidacy is most unique is foreign policy. "There is one main issue that is central to the rest," she told Van Jones after listing planks for a progressive domestic platform. "And that is the issue of war and peace."

Gabbard has spent her national career in the spotlight for her heterodox opinions on foreign policy, breaking from the bipartisan, interventionist consensus that Donald Trump similarly challenged in 2016.

Most famously, in January 2017 Gabbard traveled, alongside former Congressman Dennis Kucinich, to Syria where they engaged in talks with President Bashar al-Assad. This caused enormous controversy at the time, with a cacophony of criticism that has only increased with her presidential announcement.

Gabbard has been one of the fiercest critics of the Syrian rebels in Congress, opposing efforts by the CIA and the Obama administration to provide billions of dollars of aid and training to Al Qaeda allied Islamist groups. "In short, when it comes to the war against terrorists, I'm a hawk," Gabbard said in a 2016 interview. "When it comes to counterproductive wars of regime change, I'm a dove."

And the congresswoman isn’t afraid to say how diametrically opposed she is to the U.S. position in Syria. "Al-Qaeda attacked us on 9/11 and must be defeated. Obama won’t bomb them in Syria. Putin did. #neverforget911," she tweeted in 2015. One of her main legislative pushes was the "Stop Arming Terrorists Act" to criminalize U.S. support for Al Qaeda, ISIS, and associated groups. The bill never made it to a vote, but she was happy to see President Donald Trump discontinue the Obama era program in spring 2017.

In line with her thinking on Syria, she lacks the anti-Russian stance of other Democratic politicians. "How does going to war with Russia over Syria serve the interest of the American people?" she mentioned in a tweet. Gabbard has also supported Trump’s diplomatic summit with North Korean leader Kim Jong-un in one of her multiple appearances with Tucker Carlson.

She has also condemned the Saudi-led intervention in Yemen in the harshest terms, saying that profit from U.S. arm sales to the kingdom was "blood money." Gabbard also criticized President Trump’s withdrawal from the Iran nuclear deal. Gabbard has called for a military withdrawal from Afghanistan, while also declining to condemn torture as an interrogation method.

One area where Gabbard seems to be in full agreement with traditional Washington politics is on Israel. In 2015 she spoke at a conference for Christians United for Israel (CUFI), the largest pro-Israel organization in the United States, run by hardline Christian-Zionist Pastor John Hagee. And in 2016 she accepted an award from controversial Rabbi Shmuley Boteach, a supporter of Israeli settlement projects and outspoken critic of the Obama administration. At the same event, she took a photograph with Boteach and Miriam Adelson, wife of billionaire Republican donor Sheldon Adelson. Despite her support for the Iran deal, she attended Israeli Prime Minister Benjamin Netanyahu’s joint address to Congress in March 2015, an event many Democratic legislators purposely skipped. She has voiced support for a two-state solution, while also expressing muted criticism for Israeli treatment of Palestinian protesters early last year.

In a Democratic Party that’s becoming more female, more non-white, and begging for generational change in leadership, Tulsi Gabbard seems to check every box. And yet she’s likely to receive more opposition than any other candidate in one of the largest fields of any recent presidential election. And that’s almost entirely because of her previously-described foreign policy views.

In 2017, in response to her trip to Syria, former Vermont governor, former DNC chair, and 2004 Democratic presidential candidate Howard Dean tweeted "This is a disgrace. Gabbard should not be in Congress." Former Missouri Senator Claire McCaskill, defeated for reelection in last November, upon hearing Tulsi’s presidential announcement tweeted "Oh please. Isn’t this Assad’s (he who commits mass murder on his own people) bestie in America?" Thousands of other twitter users voiced the same hostility. The outrage from the commentator class was so great, that it continued to overshadow the next day presidential announcement of former Secretary of Housing and Urban Development Julian Castro.

Describing Tulsi’s campaign, Neera Tanden, president of the Center for American Progress and former advisor to Hillary Clinton, tweeted sarcastically, "Because the pro-Assad, pro-Bannon, anti-Mazie Hirono lane in the Dem party is a very big one."

"She speaks for a real but probably small constituency on the antiwar left. Her background is unusual and given the presence of more conventional progressives of many flavors in the race, I think Gabbard will have a difficult time building a following," said Dan McCarthy, editor of the journal Modern Age to TNI. "But she will force all the Democrats to address militarism in ways most of them would like to avoid—she’ll be effective at raising her issue’s profile."