Are Erdogan's Election Troubles a Precursor to Turkish Civil War? 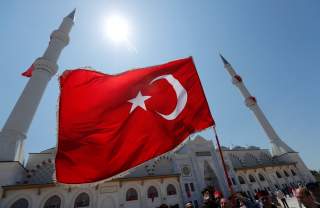 While the ruling Justice and Development Party (AK Parti) and the Turkish opposition perceived the annulment of Istanbul’s mayoral elections (due to irregularities) by the Supreme Electoral Council with differing opinions, there is one aspect that is certain: the AK Parti and President Recep Erdogan seem to be losing political ground. This perception was amplified when the AK Parti lost the mayoral elections in the capital of Ankara, the second most populated city in Turkey, to the main opposition party—the Republican People’s Party (CHP). It was a first in twenty-five years.

What is contributing to this downward trend for the AK Parti, which was once considered undefeatable? First, the nine-year-old Syrian Civil War has put a tremendous economic and social strain on Turkey. Turkey’s political disagreements with the United States over Syria prompted Washington to batter the Turkish economy by imposing sanctions and tariffs, especially on Turkish steel and aluminum. In August 2018, the Turkish lira took a record nosedive against the U.S. dollar, ushering in an era of economic crisis, which Erdogan has been unable to overcome.

Second, the influx of some 3.5 million Syrian refugees into all corners of Turkey, particularly in Istanbul and Ankara, jolted the already fragile social structure. The images of Syrian young men celebrating jubilantly the new year of 2019 in downtown Istanbul, went viral, sparking outrage among Turks. The notion that “Our soldiers [the Turkish soldiers] die in Syria while the Syrian adult men are having sweet fun in Turkey” is prevalent among Turks. Furthermore, most Turks have the opinion that the AK Parti government keeps financially supporting the Syrian refugees, giving them salaries and jobs, (although the majority of those allowances are funded by the European Union through the Turkish government) while the Turks are suffering in the midst of crippling economic conditions.

To make things worse for Erdogan, the opposition has, in an unprecedented move, established a formidable alliance with other parties and is now able to challenge the AK Party. The main opposition party, CHP, and the IYI Party (the Good Party) formed the Nation Alliance, agreeing not to nominate mayoral candidates in municipalities where the alliance member’s candidate had higher chance of winning. The Kurdish nationalist Peoples’ Democratic Party (HDP) and the Felicity Party (SAADET) de facto supported the Nation Alliance. The alliance has proven effective in the light of results in Istanbul and Ankara. Conversely, Erdogan’s own alliance with the Nationalist Movement Party (MHP) yielded disappointing results in those cities.

So, why are the rerun elections in Istanbul vital for the future of Turkey? Turkey adopted a two-round presidential system in 2007 whereby the president is granted extraordinary executive powers and is required to get at least 50 percent +1 to be elected. In 2018, Erdogan became the first president of Turkey under the new system. The recent local election demonstrated that if united, the opposition is able to build up a decisive anti-Erdogan front. In this regard, if the CHP candidate Ekrem Imamoglu wins the rerun elections in Istanbul with a 1 or 2 percent margin, it will give the anti-Erdogan block a psychological edge and will herald difficult times ahead for Erdogan. By receiving an undisputed Istanbul victory, the anti-Erdogan block will have achieved its “Royal Flush.” (With Istanbul results undecided, the CHP has already won the four biggest cities Ankara, Izmir, Adana, and Antalya)

There are two possible scenarios for the post–June 23 rerun elections for Istanbul, and neither looks bright for Turkey. In the first scenario, the AK Parti candidate Binali Yildirim wins, and the anti-Erdogan block then begins its long aspired “Venezuela-style” uprising in the form of street demonstrations. Turkey witnessed this type of attempt to overthrow the government with the Gezi Park Protests in 2013 where a 2.5-month-long nationwide, violent demonstration resulted in twenty-two deaths and thousands of arrests. The opposition could certainly try to implement a violent insurrection, but with the police, military and the intelligence in Erdogan’s full control from the purges in the aftermath of July 15, 2016, failed coup attempt, law enforcement and intelligence would likely be quick to quash or even prevent such events from erupting in the first place.

However, Turkish society is divided as never before, an AK Parti win in Istanbul may trigger social turmoil in Turkey, which the state may be unable to control. The soccer games, particularly those of Besiktas SK and Fenerbahce SK are conducive in initiating such mass mobilization as the fans of those soccer clubs are known to be anti-government. For instance, the Carsi Group of Besiktas SK was one of the driving forces behind the 2013 Gezi Protests. It is no coincidence that Ekrem Imamoglu went to Besiktas SK-Medipol soccer game ten days after the elections before he received his certificate from the election board. In the game, the Besiktas fans clamored in support of Imamoglu.

The second scenario has long term implications. If the CHP’s candidate, Imamoglu, wins, then it will prompt widespread efforts by the opposition to call Erdogan and the AK Parti’s legitimacy into question. Although Ibrahim Kalin, the spokesperson for the Turkish president, said there would be no elections until 2023, the year in which Erdogan’s term is up, if he feels confident enough, he could call for a snap general election. Erdogan’s second term greatly depends on how the Turkish economy evolves until the next presidential election.

Erdogan’s possible loss of presidential elections will pave the way for a colossal paradigmatic shift in Turkish politics whereby the anti-Erdogan coalition will replace the AK Parti realm which has been in the making since 2002. This replacement will likely be a painful process for Turkey since the new non-AK Parti president would almost certainly set about to unravel the power structure that Erdogan paved within the military, police, judiciary and other cadres of the state. Among the members of the anti-Erdogan opposition bloc are Fethullah Gulen and his supporters, who are believed to be behind the botched 2016 military coup, and the Kurdish nationalist HDP, some of whose members have been jailed on the grounds of terror charges.

In the event of Erdogan’s departure from the presidency, those entities as well as the main opposition CHP will likely retaliate against the AK Parti elements because of the grudge they nurtured throughout the seventeen-year-long AK Parti rule as well as the purges that impacted hundreds of thousands. This kind of transition will undoubtedly spark violence between the opposing layers of the society leading to a vicious civil war. Erdogan has crafted the upper echelon of the state in his image. How the pro-Erdogan generals, police chiefs and intelligence officers will react to an anti-Erdogan president, who by definition presides over all of these important elements of the state, is anybody’s guess. A more important question is will Erdogan allow for his replacement to take office in the first place. A forceful obstruction of the opposition from ascending to the presidency is a recipe for disaster.

Regardless of the Istanbul election results, extremely hard times are ahead for Turkey. The economy shows no sign of recovery. There is no end in sight to the Syrian civil war, which continues to strain the Turkish social fabric and the economy. Turkish society has never been so polarized. The politicians and the prominent figures need to come up with some sort of congruity before the society consumes itself from within.

Finally, Turkey’s total implosion will herald very difficult times for Europe, which has already been jolted politically by the influx of a few thousand refugees from Syria. Given Turkey’s eighty million population, a complete state of social turmoil will trigger a flood of refugees the magnitude of which Europe is not prepared to undertake.

Last, but not least, the defunct state of the second most powerful NATO member (and the bulwark against the crisis of the Middle East) will fundamentally shake the foundations of the Transatlantic alliance.

Ali Demirdas, has a PhD in political science, was a Fulbright scholar in 2007, and taught at the College of Charleston, South Carolina, as an adjunct professor of international affairs (2011–2018).