Are Iran and China Allying Against America? 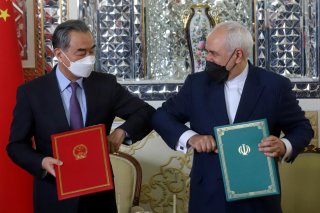 ARE CHINA and Iran about to become strategic partners? Or does the West have nothing to worry about? What might be called the “alarmist” view is that Iran and China have concluded a strategic pact which binds them for a quarter of a century touching a wide range of domains, not only oil and gas, but also military, intelligence, and connectivity to China’s Belt and Road Initiative. By this token, Iran’s “pivot to the East” represents a permanent shift in its strategic posture, ensuring an era of competition with the West. The basis of this view is a memorandum of understanding (MOU) that was leaked in June 2020, which purports to be a Comprehensive Strategic Partnership Roadmap between the governments of Iran and China. This eighteen-page document exists in three languages (Farsi, Mandarin, English), but only the Farsi version has been released. The $400 billion deal struck between Beijing and Tehran was officially announced in late March of 2021.

The second view might be termed the “assuager” view and it posits that no Iran-China rapprochement is in the works; It’s business as usual in the world of great power politics, and what is uppermost in the minds of the Chinese leadership is how to restore normalcy in its trade relationship with the United States ($550 billion annually versus $25 billion with Iran). As for the “China-Iran” deal, this is merely posturing and chest-thumping on the part of Iranian authorities attempting to sway public opinion at home; to persuade the Iranian people that it is not about to crumble and that it does have options other than the United States.

On these views, similar policy trajectories emerge—each inhospitable to a “clean return” to the 2015 Joint Comprehensive Plan of Action (JCPOA). The implication of the first view is that Tehran and Beijing (and Moscow too) have a common strategic interest in containing and countering U.S. military preeminence and will seek to do so in a hard-nosed manner. Amid this posture, the United States is best served with a policy of isolating Iran and seeking a “longer and stronger agreement” that would deal with other “deeply problematic” issues.

Similarly, the second view reasons that given that no permanent strategic partnership is in the works, nor is a long-term partnership likely to emerge, it is best to dispense with the 2015 JCPOA, and to negotiate new terms better suited for the current security landscape. Hence, whatever diplomatic leverage has emanated from President Donald Trump’s “maximum pressure” policy should be the basis for negotiating a new comprehensive agreement which addresses the concerns of U.S. regional allies (Saudi Arabia, United Arab Emirates, Israel), failing which sanctions must persist, including secondary sanctions (deterring third parties from conducting business with Iran), and if Iran continues to pose security concerns, all options ought to be on the table.

ASIDE FROM hindering nuclear diplomacy, these worldviews signify the likelihood of longer-term difficulties between Washington and Tehran. Indeed, if Tehran is seen as being steered by Beijing, or alternately if it is conceived of as a middling power lost at sea, the pathologies of the American national security establishment will have little other to do—rightly so—than to land on a mixture of bellicose threats and minor adjustments. But strategists in Washington who have taken to these views have been too intoxicated by old ways of practicing international politics: an incessant obsession with maintaining “credibility” and paying lip service to a “rules-based” order. These tendencies have come at the cost of clear-eyed thinking on Iran.

Blessed with decades of prosperity and security, we have lost the tradition of thinking geopolitically about international politics (as practiced by Alfred Mahan, Walter Lippmann, George Kennan, and Henry Kissinger). It is this habit of mind that is much needed in an assessment of Iran—an awareness for the nature of change in global politics and a sense of what opportunities and difficulties present themselves accordingly.

On this approach, there is a third view which grows from a middle-ground understanding of the Iran-China strategic context. This view suggests that Iran has neither fully committed to the “East Pivot,” nor will it do so if it can get an agreement with the West. But failing an agreement with the West, Tehran will fully commit to China. The policy implication of this view—if one accepts “strategic competition” as the guiding principle on China—is that the Biden administration should “test the opposite premise” of isolating Tehran, “by restoring nuclear diplomacy, lowering regional tensions, and forging new arrangements.” Crucially, to accomplish this vision, a “fast timeline” of re-joining the 2015 Iran deal is necessary—but far from sufficient.

This paper elaborates on this third view. First, I outline China’s strategic interest in Iran. Second, I lay out Iran’s strategic interest with regard to China and the West. Third, I address what the United States’ response should be in view of this strategic context. Ultimately, I argue that the national interest is best served with prudent diplomacy towards Iran, that it’s best to avoid the risk of pushing Iran further into China’s arms, and that a “clean return” to the JCPOA as soon as a feasible re-entry solution is found is critical. Then and only then can the shift to tackling regional instability (proxies and missiles) occur. Of greater significance, such an opening gambit would mark the beginning, not the end, of redefining the United States’ relationship with Iran.

TO UNDERSTAND China’s strategic interest in Iran, we must first take a bigger picture view of China’s grand-strategic aims in the region. In 2013, President Xi Jinping announced China’s Belt and Road Initiative (BRI) during his visit to Kazakhstan and Indonesia. Xi outlined China’s priorities in the region in terms of growing economic ties, widening access to maritime trade corridors, establishing security relationships, and facilitating cultural exchanges. Most significantly, however, is China’s vast collection of infrastructure projects—railways, energy pipelines, highways, seaports, border crossings—both westward, through the mountainous former Soviet republics, and southward, to Southeast Asia. China’s ambition is stunning. Presently, more than sixty nations (representing two-thirds of the world’s population) have signed on to projects related to China’s BRI.

But China’s regional ambitions—as structured by the overarching BRI—face a clear hurdle with respect to Russia, namely that any successful engagement with the Middle East, key to Xi’s broader notion of a Sinosphere of shared prosperity in Eurasia, is to a great extent at the mercy of Russia. Since the late 1950s, Moscow has been a major political actor in countries like Egypt, Syria, Iraq, and Libya—each of which were at one time Soviet client states. Today, Russia remains a key power broker in the region, maintaining relationships with three major constituents: Israel, Iran, and the Arab states. For its part, Beijing sees Russia as a “genuine strategic partner” based on the two countries’ fundamental interest in deterring the United States from undermining their domestic and global position. But even this Beijing-Moscow “authoritarian international” faces its challenges—and this is particularly true in the Middle East. For starters, Russia seeks a potential role for itself within the U.S.-China paradigm as the leader of a nonaligned movement—a “third way.” Second, Moscow has engaged in a precarious balancing act, pursuing opportunities for cooperation with countries such as India, Korea, and Japan, which represent Beijing’s regional rivals. Lastly, both Beijing and Moscow are positioned to be in growing conflict over the Arctic and its potential of being a strategic resource base. These general developments have led to “cooperation, ambiguity, and tension” in Sino-Russia relations. As one analyst framed it, cooperation between Beijing and Moscow is “hamstrung by historical suspicions, cultural prejudices, geopolitical rivalry, and competing priorities.”

China’s pact with Pakistan—a country that is peerless in terms of the depth and extent of BRI investment (including launching Pakistani sensing satellites from China and developing fighter jets such as the JF-17)—has been a singular success for China to break out of the Russian straitjacket in Central Asia and create a bypass through South Asia. But Pakistan is not enough, and without Iran there can be no meaningful infiltration of the Middle East.

From this perspective, it becomes clear what Iran means to China: elbowing out of the Russian straitjacket in Central Asia and paving the bricks of the Eurasian BRI. Both in terms of geography and political-economy, Iran represents a series of opportunities for advancing the BRI agenda. Iran provides overland access to Iraq and Syria—where postwar reconstruction by Chinese firms can be turned into permanent arteries of trade. Iran is also a necessary powerbroker in Syria, a country with a foothold in the Mediterranean, where Chinese outposts are being implanted in Greece and Italy. Iran also provides the Caspian-Gulf linkage (ending in Chabahar Port in the Persian Gulf, downstream of the Strait of Hormuz, not far from Gwadar Port in Pakistan, the terminus of the China-Pakistan Economic Corridor). Iran is also a pivotal player in Iraq, Lebanon, and Yemen, and has a key cultural foothold in Afghanistan, notably amongst the Dari-speaking population (Afghan dialect of Persian) including the Hazaras (Persian-speaking and of Shiite faith), chipping away at Russia’s cultural dominance of Central Asia.