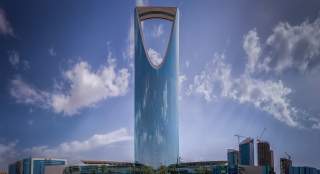 October’s $17.5 billion sovereign bond deal launched by the Kingdom of Saudi Arabia was an emerging-markets record, eclipsing Argentina’s $16.5 billion deal earlier this year. According to the Financial Times, demand for the Saudi deal was well in excess of its size, reaching $67 billion. The size and success of the Saudi deal reflects the increasingly risky nature of global securities markets and has significant geopolitical implications.

International financial markets are dominated by the search for yield. A number of factors are at play: a growing number of people in the West and Japan are trying to retire and tap retirement and pension plans, wages in many advanced economies have stagnated for an extended period, and near-zero or negative-interest-rate policies by major central banks have increasingly penalized savers, pension funds and insurance companies. In the latter case, highly accommodative monetary policy has taken away the option of would-be retirees to generate interest-rate income, which is making many work longer and contributes to social angst, giving impetus to populist political parties and leaders in Europe and the United States.

To find yield, investors are being forced to assume greater risk, a situation that benefits sovereign issuers such as Saudi Arabia. The plunge in oil prices since 2014 has hurt the Middle Eastern country in terms of larger fiscal deficits (over 10 percent of GDP last year), lower export revenues and painful cuts in public expenditures. Yet the kingdom remains solidly investment-grade, continues to have a comparative advantage in pumping cheap oil and has enjoyed a relative degree of political stability. Moreover, a young, well-educated group of royals is implementing long-needed structural reforms to diversify the economy. The new bond issue will add to the country’s rising debt (up from $38 billion in December 2015 to $73 billion in August 2016), but will replenish foreign-exchange reserves and be used to help reforms.

Saudi Arabia benefits from a number of developments. One, emerging markets are in demand as investors chase yield. Considering that negative-yielding bonds stand at $10.4 trillion (with $5.3 billion in Japan and most of the rest in western Europe), the Saudi deal was regarded as highly attractive to global investors, with its ten-year tranche above 3.0 percent. Additionally, Saudi bonds have comparable or better ratings than a number of European sovereigns, which makes them a real bargain. Saudi Arabia is rated by Moody’s at A1 (several levels above non-investment-grade ratings), by Standard & Poor’s at A– and Fitch at AA–, giving it better ratings than Spain, Portugal and Italy.

The Saudi deal, which follows earlier sovereign deals by Abu Dhabi ($5 billion) and Qatar ($9 billion), precedes a pipeline of other Middle Eastern deals waiting to hit international markets. While the next Saudi deal is likely to be a public offering of equity in the state oil company, Saudi Aramco, other potential bond issuers are Kuwait, Jordan and Equate Petrochemical (a Kuwaiti joint venture with Dow Chemical).

Where does geopolitics fit into the Saudi bond issue? One of the major drivers for a new round of Middle Eastern bonds is lower oil prices. Saudi Arabia and its Gulf state allies drove oil prices down to protect market share from Russian, Iranian and U.S. production, but paid the price in lost fiscal revenues. According to Standard & Poor's, the six Gulf states (Saudi Arabia, Qatar, Bahrain, Kuwait, the United Arab Emirates and Oman) will need to borrow a total of $560 billion over the next four years to compensate for lost oil revenues. Most of the Gulf states have used oil wealth to provide a high standard of living for their citizens; the decline in oil prices has hurt this arrangement in most Gulf states.

The loss of oil revenues also underscores the Middle East’s heavy dependence on hydrocarbons. Along these lines, the last two years have been tough. As the International Monetary Fund noted in its October 2016 World Economic Outlook, “The largest economy, Saudi Arabia, is projected to grow at a modest 1.2 percent this year in the face of fiscal consolidation, before picking up to 2 percent growth next year. Growth rates in most other countries of the Gulf Cooperation Council are similarly projected to be held back by ongoing fiscal adjustment.”

The IMF also notes that the Middle East (in a broader geographical sense that includes Syria, Iraq and Egypt) “continues to confront difficult challenges with subdued oil prices, the fallout from geopolitical tensions, and civil conflict in some countries.” Consequently, political risk abounds in much of the Middle East. Although Saudi Arabia is relatively stable (especially compared to Iraq, Syria and Yemen), it has its own share of geopolitical risks—periodic terrorist attacks, Sunni-Shia tensions and a war in neighboring Yemen with Iran-backed Houthis. Additionally, Saudi Arabia is locked in a cold war with Iran throughout the Middle East.

The Saudi bond deal represents a confluence of international financial markets and geopolitics. For markets, the challenge is balancing the need for yield with managing risk. Saudi Arabia provides better yield than many similarly rated sovereign credits, but it sits in a tough neighborhood, is undergoing substantial structural change in its economy and remains heavily dependent on oil. Moreover, its bonds will remain sensitive to general market swings, such as whatever reactions there are to the U.S. central bank raising rates, the outcome of the U.S. presidential election and whether the European Union can avoid a new economic crisis.

In a geopolitical sense, the Saudi deal provides an important injection of capital into the country, helping to replenish foreign exchange reserves and help funding for reforms. The deal also establishes a critical bond benchmark for Saudi Arabia, which is helpful to other Saudi and other Gulf state issuers in need of financing in the face of a sustained period of lower oil prices. The fact that the deal was readily absorbed clearly indicates that the search for yield on the part of advanced-economy investors trumps risk concerns—at least for now.