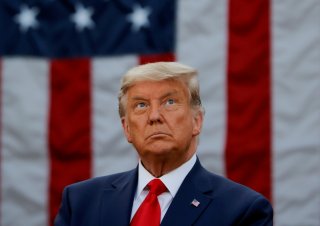 President Donald Trump, who has not appeared in public in a week and cancelled his Thanksgiving vacation, is grasping at thin reeds indeed. A case in point is his meeting today with Republican Michigan state legislators who will likely relish their visit to the White House and then return home to do … absolutely nothing. Despite all the hand-wringing, pearl-clutching, or whatever term you want to use, among liberals, the election is over. Trump will continue to try and delay, as far as possible, the official results, but it won’t work. The electoral machinery is grinding on, no matter how much sand Trump tries to throw into the gears.

The truth is that Trump may be doing Joe Biden a favor in more ways than one. An ardent fan of Trump, Scott McConnell of the American Conservative, speculates on Twitter that the president is damaging his own legacy with his attempts at electoral prestidigitation. The result is that Trump is making it easier to prosecute him once he leaves office. In McConnell’s view, “if the Dems go full banana republic and try to prosecute him on some BS charge (paying off a bimbo) people will say, meh.”

Aram Bakshian, Jr., a former chief speechwriter for Ronald Reagan, observes, “It just seems like a pointless exercise as things now stand. I suspect that part of Trump’s brain has already recognized this, but his ego keeps him from letting go. Unless and until [Rudy] Giuliani and company score some sort of dramatic—and highly improbable—legal or legislative coup, it’s all just bad political theater.”

The longer he delays acknowledging that he lost, the more Trump looks like a sore loser. Biden, by contrast, gets the benefit of appearing statesmanlike—calm, reassuring, unruffled, the very qualities that originally allowed him to edge ahead of Trump in the 2020 campaign.

Another favor that Trump has inadvertently done for Biden is insufficiently emphasizing the administration’s moves on the vaccine front. The fact is that Operation Warp Speed was a success. But you’d barely know it from listening to Trump. By focusing on the election, Trump is obscuring his own accomplishment. He should be holding press conferences about how his leadership helped to promote vaccines that will not only save American lives, but turn around the American economy by the spring.

Which is another favor Trump has done for Biden. Biden is going to enjoy the fruits of an economic recovery the likes of which Americans may never have seen before. It may be known as the Biden Boom if America experiences tremendous economic growth. In China, consumers are engaging in what’s called “revenge consumption”—they’re making up for lost time. Writing the London Review of Books, Wang Xiuying notes that “in April, the Hermes flagship store at the Taikoo Hui mall in Guangzhou reopened, achieving a new sales record: 19 million RMB in one day. In August, the Louis Vuitton shop in Shanghai made 150 RMB, almost double the amount it usually takes in a month.” A similar consumer binge may well take place in America, particularly if the economy tanks this winter, as seems likely. The stage will be set for a rebound in the spring of 2021. It almost goes without saying that Biden’s political standing would be immeasurably boosted by a strong economy.

For Trump and his family, this prospect would be a disaster. They need the Biden presidency to be an unmitigated failure, mired in economic gloom. Already Trump is surely focusing on the legal perils that he faces once he exits the White House. Ivanka issued a telling message yesterday about the New York state investigations that she is apparently ensnared in. She depicted them as purely political in nature. “This is harassment pure and simple,” she stated on Twitter. “This ‘inquiry’ by NYC democrats is 100% motivated by politics, publicity and rage. They know very well that there’s nothing here and that there was no tax benefit whatsoever. These politicians are simply ruthless.”

The stakes once Trump leaves office will remain high. While Biden has indicated that he has little interest in dwelling on the past, Trump faces a number of dangers. He will require all his formidable skills at stagecraft to deter and elude his legal pursuers and political enemies.